The Ancient City of Aleppo has been ruled, among the other, by Romans, Byzantines, Seljuqs, Mamluks and Ottomans. It is one of the oldest inhabited cities in history.

It knew human settlement since the eleventh millennium B.C. through the residential houses which were discovered in Al-Qaramel Hill. It occupies a strategic trading point midway between the sea and the Euphrates. The main role of the city was as a trading place.

The historic buildings that remain include the Citadel and several medrassahs dating from the 12th and 13th centuries, and numerous mansions, palaces, churches and mosques that were added until the 19th century. 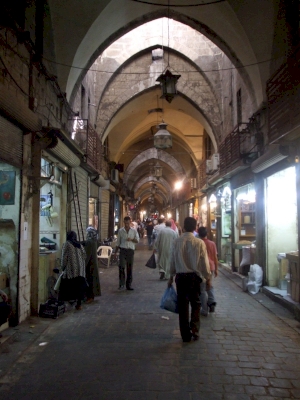 Late afternoon, the first day of Ramadan, and the heat was intense. It was a blessed relief to duck into the shade of the Souq al-Attarine. The brickwork radiated coolness. The stark electric fluorescent lighting of the stalls vanishing off into the distance leant the scene a slightly sci-fi air. Each store front had its own distinct aroma: cumin from a spice stall, laurel Aleppo soap from a soap-seller, honey from where kunafa was being made on huge trays, fat from the fly-blown camel carcass hanging outside a butchers. I cruised back and forth past the souvenir sellers for a while, hoping to get called over and engaged in sales patter (I certainly wasn’t going to make the first move!). No good. It was almost 5pm and the touts and hawkers, the hucksters and salesmen had no energy for haggling. Their eyes were watching the clock, counting down the minutes until they could pull down their roller shutters and head home for their first meal, their first drink and (crucially I think) their first cigarette since sunrise.

Aleppo is – or perhaps was considering that I visited in 2009 prior to the ongoing Battle of Aleppo – an amazing city. It was the souq at the end of the Silk Road, and historically almost anything could be bought there. It also has a rivalry with Damascus about which is actually the oldest continually-inhabited city in the world.

I sat down to write this review thinking that there were two complementary parts to this World Heritage Site – the Citadel and the souqs. Solivagant has written about the Citadel. It is a stupendous sight, a massive man-made mound encircled by a 20m deep moat. The moat itself is spanned by a fragile arched bridge that rears up steeply to reach the gatehouse. Inside the walls the citadel is mostly a complex of ruins but that should not deter anyone for visiting. The tree-shaded patios give a spectacular view of the dun-coloured city spreading away in all directions.

The heart of the souqs lie to the west of the Citadel, running to the Bab Antakya (Antakya Gate). Souq al-Attarine serves as the core, a vaulted brickwork passageway lined with storefronts. Other covered souqs run parallel to create an atmospheric maze. The Great Mosque sits to the north of al-Attarine and I was permitted to poke my nose into its courtyard (though not the mosque itself). To the south is the multi-level Khan al-Jumrak which serves as a combined cloth market, goods lock-up and living quarters.

However, looking at the inscribed boundaries of the Ancient City of Aleppo on the UNESCO website here I have realised that the World Heritage Site is much bigger than I thought. In total the inscribed area covers some 3.5km2. The Citadel, the monument that in my head marked the eastern edge of the site, sits pretty much slap bang in the centre. In particular, while its western edge is indeed formed by the Sharia Bab Antakya, it spreads much further north up this road into the ‘New City’. The historic Baron Hotel, mentioned by Solivagant, lies outside the inscribed area but from cross-referencing maps the landmark 1899 Bab al-Faraj Clock Tower sits just inside. The ‘Christian Quarter’ of al-Jdeida area forms the north-western zone of the World Heritage Site. This is a pretty neighbourhood of narrow ivy-walled alleyways and grand ivy-walled mansions. It is also liberally larded with churches and cathedrals belonging to pretty much all the Christian denominations of the near east, from Armenian to Maronite, from Greek Orthodox to Greek Catholic to Syrian Catholic. But the main attraction for me – visiting during Ramadan – was that they still served lunch!

As I said earlier, Aleppo was the scene of some of the fiercest fighting in the Syrian Civil War with the forces of Bashar al-Assad holding the Citadel and various rebel factions trying to take the Old City street by street to capture it. Citadel, Great Mosque, souqs, al-Jdeida. All suffered quite horrific damage in the conflict.

There has always been a strong rivalry between Aleppo and Damascus. For me though, Aleppo (based on my visit in 2004) has more charm and is more relaxing. It's less touristy and has some amazing restaurants in its ancient quarter. The day trip from Aleppo to Latakia on the coast was a bit of an anticlimax... better to stay in Aleppo if you have the time.

Aleppo is well worth a day of anyone’s time. With a range of buildings both monumental and everyday from between the 12th and 17th centuries it has been inscribed for its “its cohesive unique urban fabric”. Well, I don’t know about that but it did feel quite “Middle Eastern” and “Arabic” to me. The highlights are the citadel (photo) and the covered souqs. The museum has some superb Hittite statues. Although it has a population of almost 2 million the main sights are within reasonable walking distance of each other. We thought the “famed” Baron Hotel with its “period” (some would say “grotty” –though it may have been renovated since we were there a few years ago!) furnishings and the signature of Lawrence of Arabia in the visitor’s book somewhat overpriced – worth having a look round but there are plenty of other hotels in the area (which is certainly convenient for the historic sights).

The lure of Aleppo

The site has 50 connections

Cultural sites damaged by fire since inscription: Al-Madina Souq (sept 2012)
Damaged in War since WWII: Syrian Civil War. "In Aleppo, one of the oldest covered marketplaces in the world is now in ruins; its maze of stone streets has been one of the most intense battlefields in the country for the past 18 months, bombed from above by air force jets and chipped away at ground level by close quarter battles ......Those who dare raise their heads above the ruins, towards the ancient citadel that stands at the centre of the city, can also see damage to several of its walls." The Ummayad Mosque is also destroyed

Byzantine Empire and Civilization: Remains of Hittite, Hellenistic, Roman, Byzantine and Ayyubid structures and elements are incorporated in the massive surviving Citadel. (OUV)
Silk Roads: Classic Land Route; commercial hub Al-Madina Souq with caravanserai where silk from Persia was traded
Assyrian Empire
Babylonian Empire
The Crusades: The Citadel of "Aleppo" is a major component of the WHS and has a significant connection with "The Crusades".
Sieges and Battles: By Saladin
Mamluk Sultanate: Rebuilt the city in the late 13th century (Great Mosque, Citadel) and constructed the Altinbugna Mosque (1318-1323)
Umayyad Caliphate: Mixture of buildings including the Ummayad Mosque of Aleppo, built on the orders of the Ummayad caliphs
Ottoman Empire: Ruled by Ottomans, remains of that era include Ahmadiyya Madrasa, Ahmad Pasha Khan, Adiliyya Mosque and other mosques and residences
Hittites: "The Hittite Suppiluliumas I permanently defeated Mitanni and conquered Aleppo in the 14th century BCE. Aleppo had cultic importance to the Hittites for being the centre of worship of the Storm-God.". The Storm God Temple on Aleppo Tel was excavated from 1996. It both pre and postdated the Hittite period but, among the discoveries, were Hittite carvings and hieroglyphics
Oldest continuously inhabited cities: Aleppo, Chalcolithic (4,300 BC or earlier)

Timur
Gertrude Bell: Photo taken February 1909
Saladin: Besieged 1182
Baibars: occupied it in 1261
Johann Ludwig Burckhardt: Burkhardt's base from 1809/12 after being accepted by the "Association for Promoting the Discovery of the Interior Parts of Africa" or "African Association" to penetrate the central and western Sudan. Perfected his Arabic there, adopted an Arabian persona and probably genuinely converted to Islam.
Ibn Battuta: "Halab [Aleppo] is one of the most illustrious of cities, and one which has no rival in beauty of plan and perfection of arrangement, and in the spaciousness and symmetrical disposition of the bazaars"
Giosafat Barbaro: After the death of Uzun Hasan in 1478, Hassan's sons fought each other for the throne. Barbaro hired an Armenian guide and escaped by way of Erzerum, Aleppo, and Beirut. He reached Venice in 1479.

Built in the 12th century: "Aleppo is an outstanding example of an Ayyubid 12th century city"

In the Pergamon museum: Aleppo room

Global Heritage Fund: Threat level: at risk
World Monuments Watch (past): Cultural Heritage Sites of Syria (2014), Citadel of Aleppo (2002), Souk of Aleppo (2018)
Memory of the World: Aleppo Codex (2015) - "It is rumoured that in 1375 one of Maimonides' descendants brought it to Aleppo, Syria, leading to its present name" (wiki)
UNESCO Intangible Cultural Heritage Lists: 2021: "Al-Qudoud al-Halabiya is a form of traditional music from Aleppo with a fixed melody. ...Aleppans continue to perform the music in the alleyways and souks of the old city."