Havana was founded by the Spanish in 1519 in the natural harbor of the Bay of Havana. It became a stopping point for the treasure laden Spanish Galleons on the crossing between the New World and the Old World.

The designated area consists of a set of 18 fortifications along the coast and the harbour, the old city center (Habana Vieja) and 19th century extensions. The Castillo de la Real Fuerza is the the oldest extant colonial fortress in the Americas. Other important remaining castles include Castillo del Morro, La Cabaña fortress and San Salvador de la Punta Fortress.

The pattern of the early urban setting has survived in the historic centre. 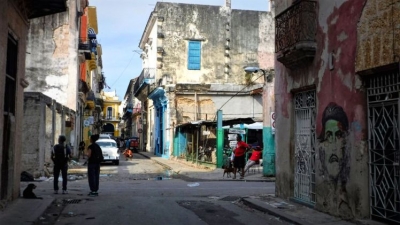 The capital city of Cuba, Havana (or La Habana as it is called in Spanish) is a city that bears the signs of a troubled history, although at times prosperous, and of the influence of different cultures.

It was founded in 1519 by the Spanish colonizers and it quickly gained importance as one of the largest ports and main centers for ship-building in the Caribbean.

The downtown area on Havana, Habana Vieja (Old Havana), which is also where the original city was first located, was inscribed in the UNESCO World Heritage List together with its fortification system, in 1982.

The history of Havana is way too long and complex to be described here, I will therefore limit myself to describe my feelings for this wonderful place.

The inscription in the World Heritage List is justified by the integrity and authenticity of Old Havana and the fortifications: the architecture, the monuments, the nearly perfect grid layout, the general atmosphere of the place. All these factors make it feel like time has stopped at some point in the past, when Havana was a glorious city, although it is now decadent with lots of empty and abandoned buildings everywhere. This contradiction is absolutely fascinating.

A walk around the streets of Habana Vieja will captivate any visitor. The place is vibrant, music is played everywhere (and often very loud), people spend a lot of time on the streets, playing chess or domino, dancing or just sitting on a step and smoking a badass cigar, kids play soccer and locals visit the ubiquitous PCC (Communist Party of Cuba) offices. The atmosphere is just addictive. It is too easy to start chatting with someone who invites you to dance with them on the street.

But it’s not only about the vibrant atmosphere, Old Havana has also a lot of very interesting sights to visit. The plazas (Plaza Vieja is so pretty!), the churches, the Capitolio, Calle Obispo and Calle Mercaderes, the paladares (privately owned restaurants) and the bars.

Another distinctive sign of Havana is the unfailing presence of the classic american cars that are featured in any photo of Cuba. The conditions of some of these cars are unbelievable, they look like they were made yesterday.

The fortifications are located on the east bank of Havana Bay, across the entrance Channel, which they dominate, and can be reached by a short taxi ride from Old Havana or by public bus. On the west of the Old Havana is found Havana Centro, with the small Chinatown (where no Chinese people live anymore) and Vedado, where most of the fancy government-run hotels are located.

It is also worth to spend some time exploring Vedado as there are located the Colon Cemetery and the huge Plaza de la Revolucion, famous for the faces of Ernesto Che Guevara and Camilo Cienfuegos (heroes of the Cuban Revolution) engraved on the facades of the building surrounding the square and the monument to José Martí.

I spent a total of 4 days in Havana and I’m not sure it was enough. It definitely was more than enough time to visit everything I wanted to see and I even managed to spend half a day on the beach at Santa Maria (one of the so-called Playas del Este), but it wasn’t enough to fully enjoy the atmosphere of the city. I felt like I was leaving too early and there were more aspects of the city to be experienced.

Keep also in mind that, especially in high season, there are a lot of tourists and the lines for everything can be painstakingly long. The queue at places like the Museum of the Revolution, the exchange bureau, the Etecsa Telepunto (the internet office), but even getting a drink at popular bars such as La Bodeguita del Medio o El Floridita, or buying ground coffee at Café El Escorial (a must for coffee lovers), can easily take well over an hour, if not two. 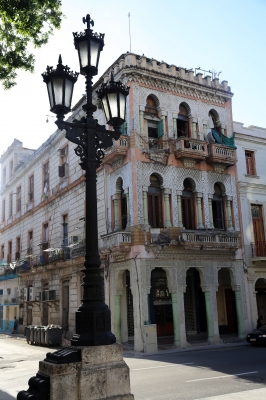 The most famous and popular tourist attraction in the whole Cuba. Old Havana or Havana Vieja is the entire world of twisting streets with colorful dilapidating buildings and rich history behind.

The city of Havana was founded by the Spanish in the 16th century and due to its strategic location it served as a springboard for the Spanish conquest of the Americas, becoming a stopping point for treasure-laden Spanish galleons returning to Spain.

The most significant fortress system of Havana, the military-historical park El Morro – Cabaña, is nowadays is a big touristic complex, which reflects the history of Havana during the last five centuries. In some buildings you can find museums, including the museum of ancient armaments and the museum of Che Gevara.

Every night at 21:00 a cannon is fired, the so-called "El Cañonazo de las 9", a custom kept from colonial times significating the closure of gates in the city wall. Now it symbolizing another shiny day in Cuba.

There is strong feeling that this old fashioned Havana with its bizzare 60-year old cars and empty state shops will be gone soon. And we can't conclude whether it would be good or bad, certainly should be better for the locals. We were a little bit upset by a huge number of touts and tourist traps, which started to appear only recently. But if you get up early before crowds and stroll in the old centre, you will probably catch a glimpse of real Havana spirit.

The crowd at the Castle of the Three Kings of the Orient is larger than one would expect for a daily event, but the evening is lovely and there’s really no reason to avoid just hanging out with friends after a hard day’s work, or touring. The sun has just set and the show is starting…

A soldier clad in 18th century uniform walks through the crowd wielding a torch, which he juggles like a bowling pin. This is the first part of an age-old ceremony, where the Spanish army would warn pirates that they weren’t welcome. Calling for silence in this solemn event, he’s soon joined by others similar dress. One carries a cannonball, the other gunpowder. They do their job and ker-POW!

That’s it. The ceremony’s over and the crowd begins to disperse, but one cannot help but think that what they were really aiming at was not ancient buccaneers, but Florida 90 miles to the northeast. This is Cuba, America’s nemesis, and forbidden fruit for tens of thousands of Yankee tourists every year. The government won’t let us go. What better reason to try?

It's possible to do it legally, and I did just as the Bush administration cracked down. Obama made it slightly legal again, but Romney might clamp down again.... 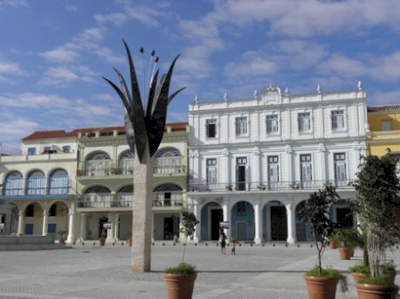 Havana wasn't really what I had expected. The included area spans only the Habana Vieja quarter and the fortresses. On my first morning in the city, I walked and walked, thinking "where is it going to start?". I finally arrived at the much restored Plaza Vieja. Most of the streets in the core of Habana Vieja have been renovated as well. I had anticipated a bustling atmosphere, but these are just a couple of brushed-up Spanish colonial houses. White, camera-toting tourists I met in abundance.

The full name of the WHS is "Old Havana and its Fortifications", and it was these Fortifications that I came to truly enjoy. The best two are on the other side of the harbour: Morro and Cabana. It's a nice and quiet area to walk in, and the views of the city are spectacular. Morro has an interesting exhibition about the travels of Columbus, and models of other fortifications around Cuba. There even is a good restaurant (12 Apostles). All around the harbour and coast smaller and bigger forts were built during various centuries, and you can still see them.

Inspired by the recent Connection "Equestrian Statues", I was attracted to a huge statue of a man on a horse that can be seen from the fortresses on the other side. This one, of Maximo Gomez (a general during the Ten Years' War and the War of Independence), probably is the most majestic one that I have ever seen. It was sculpted by an Italian, very neoclassical.

I visited old Havana and the impressive fortifications of 'el morro' in November 2008. The old city is really impressive and some of the colonial buildings are being restored. One can attend Mass at the main church and the old plazas are a reminder of how important Havana was in the trade with Seville during the Spanish Golden Age. Adding to old Havana's charm is the Caribbean and tropical flair and the strange timewarp presented by all that remains from pre revolutionary Cuba.

Old Havana and its Fortification System

Zero Mile or Kilometer Markers: In front of El Capitolio
Equestrian Statues: Grand statue of Máximo Gómez (Cuba's military commander in its War of Independence (1895-1898)), right near the fortifications
Obelisk: At Cabana fortress: "The ten Spaniards who perished were interred in La Cabaña fortress in Havana under an obelisk bearing their names."
Sundial: At Cabana fortress
Tunnels: Túnel de La Habana

Destroyed by Hurricanes or Typhoons: Ike
Bombarded by the British Navy: 1762 during the 7 Year's War

Located in a Capital City: Havana (Capital of Cuba)
Gulf of Mexico
Situated in one of the SIDS: Cuba 1982

Sieges and Battles: British 1762
Places of Execution: The "Laurel Ditch" below the walls of the El Morro Fortress was the place of execution by Spain

Sea Ports
Piracy: "Havana was originally a trading port, and suffered regular attacks by buccaneers, pirates, and French corsairs. The first attack and resultant burning of the city was by the French corsair Jacques de Sores in 1555. The pirate took Havana easily, plundering the city and burning much of it to the ground."

Christopher Columbus: Location of his remains from 1795 to 1898
Visited by Alexander von Humboldt on his travels: Dec 19 1800 - Mar 5 1801 & Mar 19 -Apr 29 1804
Ernest Hemingway: Lived there during the 1930s and 1940s
Che Guevara: "In January 1959, rebels led by Che Guevara captured La Cabaña, to use it as a headquarters and military prison for several months, while leading the Cuban revolution."
Mapped or Illustrated by Blaeu: On top frieze of "Americae nova tabula" (1617)