The "Ennedi Massif: Natural and Cultural Landscape" is an eroded mountain massif in the Sahara desert, containing numerous rock paintings and archaeological sites.

The sandstone plateau was sculpted by water and wind erosion, leading to scenically impressive features such as formidable rock arches.

Though lying deep in the desert, the area sees regular rain. This results in a varied flora and fauna, and notably in the surviving Nile crocodiles in the permanent pocket of water called Guelta Archei. It became a refuge also for humans, who left rock art there. Nomadic pastoralists are still visiting. 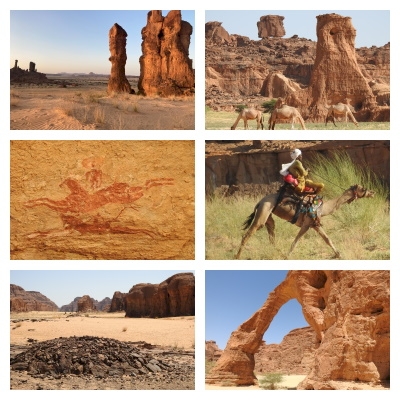 The undisputed highlight of any trip to Chad is the Ennedi Massif. This huge sandstone formation has ancient rock art, pre-Islamic burial mounds, contemporary nomadic life, weirdly eroded landforms such as pinnacles, arches and mushrooms, and the iconic canyon Guelta d'Archei. In October 2022 we experienced the area greener than our guide had ever seen it before, thanks to the generous rainy season of this year. Situated deep in the Sahara, it takes 3.5 days of solid driving on mostly unpaved roads to get there from the capital N'Djamena. We stayed for 4 days, wild camping in a different lovely location every night and driving & hiking all day between the sights.

Rock art is everywhere. Some are engravings, but mostly there are clear paintings in red and white. You can crawl into rock shelters and caves to come within touching distance of the rock paintings. I even inadvertently put up my tent next to a rock wall and later noticed there were two camel paintings next door. The most characteristic images of this region are the "flying" camels and horses, some mounted by riders. The best ones are at Terkei (flying horses in red) and Bichagara in West-Ennedi (flying camels in white). One morning we even saw a living flying camel plus a rider speed by our camp!

The eroded landforms resemble parks in Utah such as Arches NP and Monument Valley. They are known by names like the Cathedral and the Labyrinth. We visited arches such as Elephant Rock and the Ojo de Tokou. Near the latter, a large number of old burial mounds are found, neat heaps of stones that hardly have been researched.

The most iconic site of the Ennedi is the Guelta d'Archei, a steep canyon with permanent water on its floor where camels (actually, they're all dromedaries) come to drink. We reached the Guelta after a 1.5-hour hike using the 'goat entrance'. We were led to the high viewpoint by the cute but firm local guide Fatima, about 10 years old, and her little brother Omar. It appears that she and her sister are the official guides around here, they get paid for their efforts. The noise produced by 200 camels also does give the location away from far. The opening up of the iconic view is similar to that of the Treasury in Petra, although the canyon here at Ennedi is deeper. I found it hard to get good photos of it because of the strong differences in light across the canyon, but you will find plenty on the internet to get the idea.

We left the canyon via the 'camel entrance', wading through the water that came to our knees and trying not to disturb the drinking camels. Unfortunately, we did not see any of the 4 crocodiles that still survive here. We heard that a BBC team would be arriving next week to prepare a documentary about their survival and a possible introduction of a crocodile from elsewhere, as it is unsure whether any of the 4 left is male.

Although this probably is the most visited place in the Ennedi, there is no formal entrance and also no sign/plaque of any kind. As with all other places of interest in Chad, you do have to pay a ‘tourist tax’ of 5,000 CFA (ca. 7 EUR) per person to the local chief (in this case residing in the new town of Archei).

I’ve rated the Ennedi Massif 5 stars – a rare thing for me to do but I cannot think of any reason why I wouldn’t. It’s a mixed WHS where both the cultural and natural values are strong. The rock art in the region only is said to be surpassed by Tadrart Acacus, but the nomadic culture survives the strongest in Chad. The biodiversity is remarkable for a site in the Sahara desert. The eroded landforms almost seem like an afterthought, although they are among the best you’ll find anywhere in the world. There are superficially similar sites (Wadi Rum for example), but here at the Ennedi - where the core zone covers an area similar to the size of The Netherlands, 30 times larger than Wadi Rum - it’s all more, more, more and bigger, bigger, bigger. And you have it all to yourself, as it is unlikely to encounter any other tourists than the ones you arrived with.

The Archei region, which is now presented under the name "Ennedi Massif: natural and cultural landscape", is also rightly known as "the Saharian Garden of Eden".

This amazingly well preserved mountain range at the Southern border of the biggest desert in the World, is not only incredibly beautiful: it is also home to some of the most amazing rock art in the World, dating 2000 to 7000 years back, in such vast quantities and so well preserved that it is often refered to as "the open-sky Louvre", after the famous French gallery.

The place is scarcely populated, and mainly by nomads whose life hasn't changed much since their ancestors painted or engraved those rocks. Beautiful place, beautiful people, ancient culture preserved and still alive...the Ennedi is spectacular in so many different aspects.

The Ennedi Massif also hids gems of biodiversity: plants and animals have managed to survive there for more than 4000 years since the Sahara became arid again. The lucky visitor who has an early start can even spot the last Saharian crocodiles in the guelta of Archei!

bear in mind that it is not so easy to get there: one has to fly to the capital of Chad, N'Djamena, then -with an official TO- drive the whole way to the Ennedi (at least 3 full days in a 4x4). There, there is no infrastructure, so you will sleep in a tent, under the most amazing of skys, every night. It is NOT recommended to travel there alone, as the desert requires proper guides and drivers, but they are very good TO that can organise everything for you.

In brief: an amazing place, the most beautiful I have ever seen, the one that makes me cry (too much beauty to bear - too much emotion) when I go there. Truly unique!

IUCN and ICOMOS both advised Deferral, mostly because of the reduction in size of the protected area after their visit

Natural Arches of the Ennedi

Pictographs: "The polychromy of the paintings and the engravings denotes refined techniques. Most of the rock walls were painted or engraved when cattle and sheep farming was practiced" (AB ev)
Tumuli: tumuli grouped in large necropolises (AB ev)
Necropolises: Tumuli grouped in large necropolises easily detectable in the landscape - in Chibi more than 2000 burial sites extend over dozens of hectares (AB ev)

Threatened by Oil and Gas Exploration: Potential Threat: "The reduction in the area proposed for inscription was triggered by the fact that an oil concession was granted in the area which was removed from the boundaries. While this means that no oil concessions overlap with the boundaries of the site as inscribed, .... Future oil operations in the vicinity of the site may have impacts on the site's integrity and values" (IUCN Outlook 2020)

Natural Arches and Bridges: "very large concentration of rock arches, probably only exceeded by Arches National Park in the USA. With a height of 120 metres, the Aloba stone arch is reportedly the second highest .. in the world" (AB ev)
Crocodiles: "One of the most striking conservation features is the small population of crocodiles, estimated at around 10 individuals, which live in the Guelta Archei" (AB ev)

Canyons: The plateau is cut by deep valleys and canyons (OUV)
Sahara: The Ennedi mountains are one of the six major mountain massifs rising out of the Sahara Desert ...the massif has been dubbed the Garden of Eden of the Sahara (AB ev)

Iron production: some 30 bases of reduction smelters were found (AB ev)
Pastoralism: In the present day, local communities still practice nomadic pastoralism and a traditional way of life (AB ev)
African Parks Network
Hand Paintings or Hand Prints : "There were numerous handprints from both men and women found among the rock art" (wiki)

Visited by Nicolas Hulot: Ã‰mission 44 : Tchad - Espoir de vie (Tchad, 2011)
Sir Wilfred Thesiger: Describes his visit in "A Camel Journey to Tibesti" (1939): "Basking on the edge of these pools I saw six small crocodiles, the largest 5 feet in length."

Reduced from broader TWHS: The property has been reduced during the process twice, the last time excluding the northern part (due to an oil exploration concession?) which could be a future extension.
Mixed and Cultural Landscape: Continuing CL