The citadel is a museal site. It is said that one family still lives here, but to the visitor it seems deserted. There are a couple of small sleepy one room museums, and a tourist souvenir shop. The citadel is more impressive from the street level looking up. Once inside it does not have much to offer the visitor, besides the feeling of being present in this historic fortification. Allow 25 minutes for a visit. No entry charge.

The terraced coffe shop below the gate is a perfect place for brunch, and the teeming market below is joy to visit with all its raquous activity. 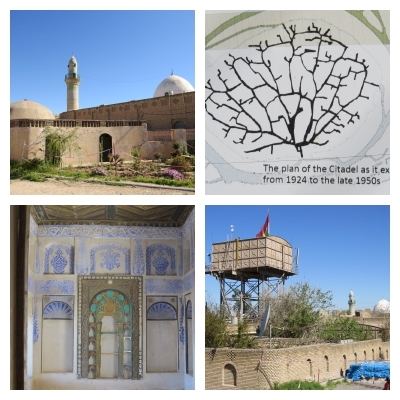 Erbil Citadel is the first WHS within Iraqi Kurdistan, a region that may become an independent state within the foreseeable future. The site is labelled as “the oldest continuously inhabited settlement in the world”. By this, it rivals better-known places such as Byblos, Damascus and Jericho. Claims like this are impossible to verify, but Erbil’s origins are certainly ancient. A better differentiator is the fact that it’s a town citadel (inhabited by people) and not a military structure.

I visited the Citadel on a Sunday morning in March 2014. I was part of a small Dutch tour group on a 10 day-tour of Iraqi Kurdistan. We entered the Citadel from the back (the North Gate) and had to pass a guard there. Our Dutch tour leader had arranged for a visit with one of the local guides, but upon entering he was nowhere to be found. That did not prove to be a big problem, as you can walk around freely in the main area. And with the help of a caretaker, we were able to open some doors and duck beneath various stretches of red tape. We also met an Iranian backpacker who was sightseeing on his own. So Erbil Citadel is now definitely open for visitors, there were also many locals around for a Sunday stroll.

I had no clear expectations of what there is to see in the Citadel’s interior. In its heyday, it was a “labyrinthine network of narrow pedestrian alleyways”. Despite the still ongoing restorations/reconstruction, the ugly 20th-century additions (water tank, paved axis road between North and South gates including a speed bump) dominate the view. The characteristic tree-like pattern of streets spreading out from the main gate unfortunately is not noticeable anymore.

In the town center lie the old hammam and the main mosque. The mosque seems to be the only place within the Citadel that is actually in use. It has a pretty tiled minaret but otherwise is modern kitsch. Behind it are a few elegantly restored courtyard residences. One of those will be turned into a Cultural Center. There’s also a textile museum but that was closed for the day. At its best moments, the Citadel reminded me of Itchan Kala, the old town of Khiva (Uzbekistan). Itchan Kala is much more atmospheric though. The Erbil Citadel clearly has suffered from a long period of decay. And although it technically might be “confinuously inhabited” for 7000 years, most people had moved out to better properties in the modern areas of Erbil by the 1960s. They kept one family in all the time to keep it inhabited. Also, refugees have squatted there recently.

So is this a worthwhile inscription? The sympathy vote has been high for this one. The Turkish WHC delegate even cried out loud “Lets’s help the Iraqi people in these difficult times!”. Its very old origins are undoubted and the story of the Kurds provides an interesting angle. It is the first WHS in Kurdistan, and with Turkey putting forward both Mardin and Diyarbakir during the coming 2 years this hints at the acceptance of the Kurds in the international community.

There’s a lot to say about the way things are restored (although some of the work was sponsored by Unesco itself) and also there's a lack of coordination on how to process further. The town now is being restored to its late 19th-century situation – nothing hints at the Assyrians or other early settlers. A lot of the buildings are still in ruins and I have not seen a sign when “it” will be finished. This is quite typical for Kurdistan where a lot of things are “80% finished”. We all know that the last 20% is the difficult part of any project.

Ottoman Empire: "The Citadel features a peculiar fan-like pattern, dating back to Erbil's late Ottoman phase" (AB ev)
Ancient Anatolian cultures: In the early part of the 3rd Millennium BC, the Hurrians from Asia Minor were the first to establish Urbilum (Erbil).
Assyrian Empire: appears for the first time in historical sources during the Ur III period, and gained particular importance during the Neo-Assyrian period (wiki)
Oldest continuously inhabited cities: Erbil, 2300 BC
Silk Roads: (Near) Classic Land Route; in ICOMOS thematic study but no details on role or function