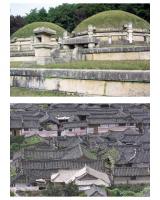 Located in a Former Capital: capital of Korea during the Koryo Dynasty
Dragon: Phyochung Monuments - "The monuments comprise large turtle-shaped granite plinths weighing over ten tons, supporting black marble stelae inscribed with poems commemorating Jong Mong Ju, and topped by pavilion-style hipped-gable caps carved from granite with dragon reliefs." - nomination file
Poetic Quotations: Transition from Goryeo to Joseon "Even if I may die, die a hundred times, Even if my skeleton may become dust and dirt, And whether my spirit may be there or not, My single-hearted loyalty to my lord will not change." - Assassination of Jong Mong-ju at Sonjuk Bridge 1392, signaling the end of the Goryeo Dynasty

Guided Tour Only: A visit anywhere in North Korea is guided