Lake Tana Island Monasteries and its Adjacent Wetland Natural and Cultural Heritages is part of the Tentative list of Ethiopia in order to qualify for inclusion in the World Heritage List.

The Lake Tana Island Monasteries and its Adjacent Wetland comprises a mixed proposal centered around a crater lake and on its islands. The area has been a centre of the Ethiopian Christian church for centuries, and many churches and monasteries remain. The wetland (a biosphere reserve) provides fish species and plants such as papyrus reed and lotus. The site also includes the Blue Nile Falls.

Map of Lake Tana Island Monasteries and its Adjacent Wetland 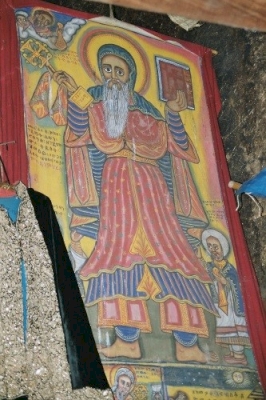 Lake Tana suddenly popped up on Ethiopia’s Tentative List earlier this year as a mixed nomination. It’s a site well on the country’s tourist trail and I visited it in 2003. I stayed in the small lakeside town of Bahar Dar, which had a few boulevard-like roads and very little else. I’ll share some parts of my travel diary from my days there, and would be interested to read a more recent review as well.

Lake Tana is the largest lake in the country and is known for its islets with ancient Orthodox churches. Most of them are only accessible to men. That's why I went to the Zege Peninsula, where I entered the Debre Maryam Church. Zege turned out to be a hilly area where a lot of coffee is grown. A forest path leads to the church. But first, there was the 'museum': it holds a number of crowns that were donated to the church by Ethiopian kings. The funny thing about this museum was that you are not allowed in – the only thing of interest you get to see through a window.

A little further lies the church itself. Beforehand I had all kinds of images in my head: I had just been to Thessaloniki and expected the Ethiopian Orthodox churches to look something like the Greek ones. But that is certainly not true on the outside. This church is a large circular building with an iron roof, topped by a round symbol. It looks like a Buddhist stupa.

Inside there were three ‘layers’: the outer ring is covered with mats and has huge wooden doors. In the next, the walls are completely covered with murals of Bible stories. The oldest date from the 17th century. The innermost of the three rings is accessible only to priests and is where a copy of the Ark of the Covenant is kept.

An hour outside of Bahar Dar lie the Blue Nile waterfalls (also included in the proposal – the Lake is the source of the Blue Nile). Due to the commissioning of a hydroelectric power station, the falls had become slightly less spectacular than in the photos in the tourist brochures. Yet it was still very much worth it. The mountains here are of volcanic origin, so there is a lot of black stone. The landscape is also very green. You can get close to the falls, there is a kind of fog that gives you a welcome fresh shower.

The entire walk around the falls took 2.5 hours and ended with a ferry ride back to the starting point. There was a special motorboat for tourists, the local population has to make do with a cheaper and dangerously low-lying papyrus boat.