Churches and Monasteries of Midyat

Late Antique and Medieval Churches and Monasteries of Midyat and Surrounding Area (Tur ʿAbdin) is part of the Tentative list of Turkey in order to qualify for inclusion in the World Heritage List.

The Churches and Monasteries of Midyat comprise 9 Syriac Orthodox monuments in south-eastern Turkey. They are located on a limestone plateau, that holds 80 villages and 70 churches. The oldest date from the early Byzantine period (6th century).

Map of Churches and Monasteries of Midyat 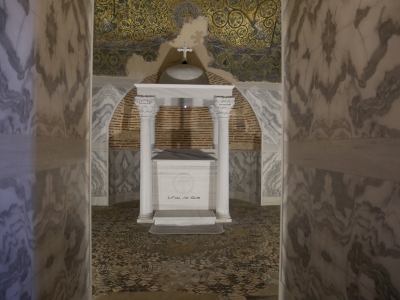 If you had asked the historic Jesus (assuming he existed) what his religion was (ignoring that the term religion is rather modern), he would have answered Jew. He was not setting out to create a new church. The Jews had had prophets before and they were preaching about the coming of the Messiah, so that's where he would have placed himself. A similar argument can be made for Mohammed by the way.

Eventually, after Jesus passed and it became clearer and clearer that the bulk of the Jews were not accepting Jesus as the Messiah, the religion separated. This was a bit of a problem, though, for the early Christians, as Jesus didn't really create rules to govern a new religion and his church. This was left to apostles and the later clergy.

They had plenty of gaps to fill and dogmas to define. Notable topics are the nature of the trinity (never understood that one, I would be an Arian if anything) or the icons. In addition, there were loads of practical topics to resolve. Several councils were held to address these, the most famous one being the council of Nicaea. If you want a fun read, I recommend the Synod of Laodicea. The very first item (canon) and supposedly the most urgent one is about second wives, secret wives and the communion?!

However, filling the gaps resulted in even more splintering of the Church. Notably, the Byzantine provinces in Syria (Antioch) and Egypt (Alexandria) held heretical positions that violated the decisions of the councils. The Syrians split from general Orthodox faith and formed the Syriac Orthodox Church.

In and around Midyat, is a key region of the Syriac Orthodox Church. After Antioch, Deyrulzafaran Manastırı near Mardin was the seat of the Patriach till the 20th century. In Midyat, you find additional monasteries and churches.

I visited both Mor Gabriel and Deyrulzafaran Manastırı as a day trip from Mardin. Mor Gabriel seemed to far for a day trip, but my industrious Turkish cabbie convinced me to go (and earn himself some more money in the process). I am grateful he did as Mor Gabriel was stunning. A huge monastery with an original chapel sponsored by Theodora (when the Syriac Orthodox Church was approved off) and many more things to see. Wow.

Mor Gabriel should be a world heritage site already. Standing in a basilica paid by Theodora... Amazing. Deyrulzafaran Manastırı was less impressive, but this may have been due to the restricted access.

I can't judge the quality of the other components as I didn't visit. Main concern I would have is that the Turkish are really good at and fond of rebuilding historic sites. In Mor Gabriel, I was fooled by some reconstructions considering them as historic when they weren't. Still, these are active sites of worship and as such they undergo changes. And unlike Europe, they didn't cover the Roman with Baroque marbles ;)

Easiest option is to hire a driver for the day either in Midyat or Mardin. They can take you to several sites of the area and prices are really reasonable. I found my guy via the hotel.

Otherwise, you can simply take a bus to Mardin or Midyat and explore the local sites. Mor Gabriel, though, will require a taxi as it's way off.

Note that several of the sites are active monasteries, so access is restricted and opening hours are limited. For Mor Gabriel, the online times are correct. For the smaller components, I couldn't find information. Both Mor Gabriel and Deyrulzafaran Manastırı require you to join a tour in Turkish.

I found Midyat to be the better Mardin. It has a nice historic old town that is more consistent than Mardin's. In Nusaybin, you have another historic early Christian church (different tentative site). And there is also Dara.

If you get a driver (and you should), I would start as follows: