Habitat troglodytique et le monde des ksour du Sud tunisien is part of the Tentative list of Tunisia in order to qualify for inclusion in the World Heritage List.

The Cave dwellings and the world of the ksour of southern Tunisia represent vernacular building types in the pre-Saharan zone. The ksour are collective granaries, to store provisions and food reserves in sufficient quantity to be able to face long periods of drought. They were also meeting places for the semi-nomadic Amazigh people. 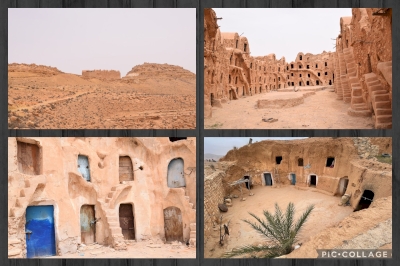 This is fun! This is great!
A new this interesting TWHS is just fantastic! They appear unique and different! Although the site description can tell us that there are other troglodyte habitats sites and thus not unique, it also says the collective granaries are.

After visiting 8 of the 22 troglodyte habitats in the southern part of Tunisia, we found mainly granaries. Some easily accessible and other more remote, and by far the more remote ones are the most interesting.

Our first one was in the town of Médenine (lower right picture). Except some unwanted odd people hanging around and a private museum inside the ksour that didn’t really appeal, it was good example. The ksour itself is big and contains a two-three story building complex with twisted and rough stairs, certainly interesting.

The second one, EI Mourabitibe or Kasr Mrabtine (upper left and right picture), was fantastic. Located alone on a barren ridge with only a rough path, it attracts few visitors. It’s a 20-minute hike up the rocky and desert-like hill to the gate of this “fortress”. Entering gives you immediately the feeling of how it must have been back in the old times. The “inside of a fortress” is a three-four story building complex again with these impossible cartoon-like stairs, and you can visualize the granaries filled with merchandise and a vivid community of people doing business the Bedouin way. It must have been an experience! The building complex has no straight line, nothing seems planned, it looks like they just started building, and then the result is – remarkably charming!

After this gem, the next one which was Ksar Beni Barka. It is also a good example, but the landscape and “layout” is completely different. It’s a hilltop and the fortress-like construction is different. This is another hike for 15-20 minutes circling the hilltop. The Ksour is slightly more run down, but it’s a good number 2.

Our fourth one, Ksar Ouled Debbab, is very much run down, weathered and full of garbage. Not worth a visit.

The fifth one, Ksar El Farch, was along the main road so there where a tourist bus present. The tourists inside took the magic away, but the complex is quite large (so you don’t have to mingle) and very visible showing that this too was a granary and a marketplace.

Number six was Ksar El Joumaa, located at a hilltop too, but smaller than the others. Still visually a granary.

The seventh was Tamezret which is more a small town and a living one, and it is where we stayed one night. It’s a bit tricky to edge out which part of this site is “original” and what is more “modern maintenance” but staying in a three room auberge felt authentic and nice!

The last element was Matmata el Guédima, but the “Star Wars Hotel” took the attention. Anyway, we were happy with having visited the two-three top ones.

There are several troglodytes homes in the area and we visited some of them passing by (lower right picture).

It probably easier visiting these sites with a car as some of them are remote places.
We drove from Djerba to Médenine, a 90 km - 1 ½ hour drive. Further to Tataouine it’s another hour or 55 km. And again, further up north to Tamezret its 2 ½ hours or 160 km. This last part of the drive feels close to Sahara - Sahel. The wind carrying the sand covers the road making it hard to see. Every now and then there are a tip of dunes into the road making it a bit hazardous drive.
In the middle of nowhere (practically) there were camels crossing, wild or not is hard for us to decide, but to us they looked wild. That was nice experience of life in this kind of desert.

Our overnight stay in this area was in an authentic 3 room Dar called Auberge Tamerzet (www.tamezret.com) run by an expat from Belgium and his Tunisian wife. Excellent local food and wine!

There are three elements of the TWHS Limes of southern Tunisia. We tempted to visit Fort of Benia bel Recheb but going through bad dirt roads and through (something that felt like) a hostile village we gave up. The other two were even harder to access according to the map. So, this became a no-visit for us.

Another TWHS Jebel Tebaga is “in the neighbourhood”, but we decided to go for the TWHS of Chott El Jerid. 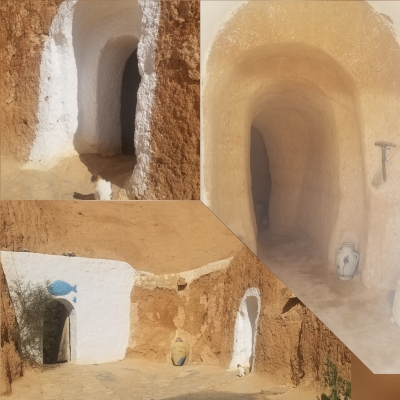 Troglodytes aren't too unique, cave dwellings are already inscribed. I don't see how much more the ones in Tunisia can offer but it does make for a great visit. The area has lots of them and they are not tourist museums but still in used by families today. The description calls them storage and granaries but they appear to be just homes. You can follow signs to visit one, pay the family some money to be shown around and try not to feel like you just intruded their lives, because it sure felt that way on my visit. If you can't find one you can always ask in town. I think I also saw one there that seemed more touristy but I had already visited two by then so I was good to continue on my journey.