Early Chicago Skyscrapers is part of the Tentative list of United States of America in order to qualify for inclusion in the World Heritage List.

The Early Chicago Skyscrapers are a collection of some of the earliest modern skyscrapers in the world, constructed in the late 19th and early 20th centuries. A number of architects, including Louis Sullivan and John Wellborn Root, were commissioned to rebuild central Chicago after the Great Fire of 1871, and they utilized new techniques and a style that became known as the Chicago School of Architecture. Their skyscrapers pioneered innovations in foundations, iron and steel structural framing, large plate-glass windows, elevators, and electric lights, which allowed for the safe and practical construction of taller buildings, and presaged the growth of vertical downtowns in the 20th century. 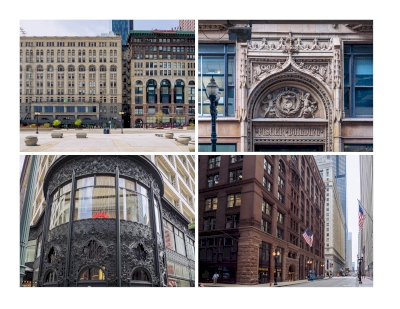 In May of 2022, I took an hour-plus out of my business-trip itinerary in Chicago to visit the buildings in this serial property. In a notable fail of the expedition, I did not read Kyle's review below prior to the walk. I assumed that all of these buildings allowed some form of easy public access to explore the interiors - and would actually have something to offer in that respect. But only a few of them do. And because I was moving northward from the southernmost of the buildings, the first five that I stopped by did not exhibit anything of value in their interiors (or could not really be entered). So, I mostly gave up and did not even attempt to enter Marquette or Rookery, which Kyle marked as the most impressive. I did step into Monadnock - only mildly interesting, certainly not anything exceptional.

From the exterior, Rookery, Fisher, and Sullivan Center (aka Schlesinger &amp; Mayer Building, aka Carson, Pirie, Scott and Company Store) exhibit the most outstanding features. Conversely, if you stand far enough from the Auditorium Building on Congress Plaza to take in its façade together with the neighboring Fine Arts Building, you may find yourself justifiably perplexed why the former - and not the richer-in-features latter - is part of the inscription (the answer likely lies in the Auditorium Theater being part of the eponymous building - but as Kyle noted, you can only see it if you attend a performance there).

I cannot envision this collection of early skyscrapers ever becoming a World Heritage site in its current form. Any student of architecture will recognize that these buildings represent the turning point in modern construction due to the innovative methods developed in time for their advent. Does that rise to OUV? Probably not. Visually, as a group, these buildings are not surpassing even within the context of just central Chicago, which, in my humble opinion, is the most architecturally impressive big city in the US. 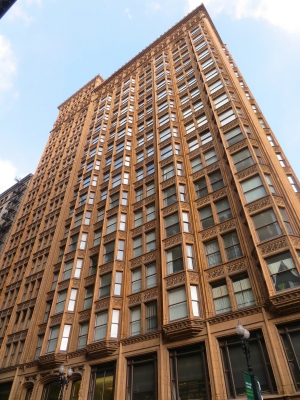