Benguela Current Marine Ecosystem Sites is part of the Tentative list of Namibia in order to qualify for inclusion in the World Heritage List.

The Benguela Marine ecosystem is one of the most productive coastal upwelling zones in the global oceans, of which an area offshore southern Namibia is known as the most concentrated and intense upwelling regime in the world. The high levels of primary productivity of this ecosystem support an important global reservoir of biodiversity and biomass of zooplankton, fish, sea birds and marine mammals. Bird guano produced by the large numbers of sea birds resulted in the globally unique guano platforms of Namibia, built at suitable localities on the coast that allows sustainable industrial harvesting of organic fertilizer. 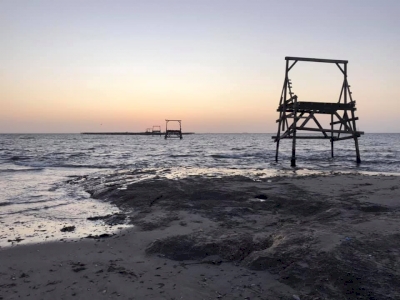 I have visited only the northern part of the potential nominated area which is not included in Els’s review, but is mentioned in the short description of the site on UNESCO website, in the Erongo Region, north of Walvis Bay and Swakopmund, southern and central coastal parts of Dorob National Park, National West Coastal Tourist Recreational Area and north-western edges of Namib-Naukluft National Park.

The most interesting areas from my point of view are Cape Cross Seal Reserve (part of the Skeleton Coast) where in January 1486 landed the first European team leaded by Diogo Cao on his way to India; he erected a padrao (stone pillar with a cross and royal coat of arms) on a hill by the coast which was to taken to Berlin in 1893; now we can see a copy of the original one; I do not know if there was a big colony of seals at that time, but today it is one of the largest colonies of brown Cape fur seals (Arctocephalus pusillus) in the world. In the past the seals were hunting in here for trade and to protect the fish stock. You can imagine the smell and the noise!

The second place that I would recommend to see is the so-called Bird Island south of Swakopmund where the wooden platforms still can be seen; they were made as a link between the coast and the island where thousands of birds leave the guano behind.

If you are in the area you can also visit the Bird Sanctuary in Walvis Bay (there’s no official entrance to the sanctuary, and the ponds are easier to reach from the main road behind the shopping mall Dunes). The place is also called Bird Paradise and, indeed, when I was there I saw lots of flamingos and cormorants; if you want to see more birds, go south of Walvis Bay (towards Sandwich harbour) to the lagoon and salt pans.

Well, the site as a whole seems very interesting and promising; I have not seen any African penguins (this time) in Namibia (but I’d seen in South Africa, north and south of Cape Town)… 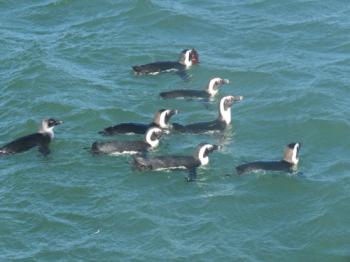 The proposed nomination includes a marine ecosystem along the southern Namibian coast including Mercury Island, Ichaboe Island, Halifax Island and Possession Island. In the coastal town of Lüderitz there are catamaran trips on offer to one of these islands: Halifax. They leave daily (weather permitting) at 8 a.m., take 2 hours and cost 450 Namibian dollar (about 30 EUR). Halifax Island is home to the largest colony of jackass-penguins in Namibia.

Lüderitz (“home of the sand storm”) is known for its windy weather, and I wondered how that would affect the boat trip. Just to be sure I had taken an anti-seasickness pill an hour before we left. Fortunately the sea wasn’t rough at all – the winds mostly start from the late morning - and we did not travel so fast. It was lovely to sit outside at the tip of the catamaran, watching small dolphins jumping around and looking at the small rock islands covered in bird guano.