Cretaceous Dinosaur Fossil Sites in the Mongolian Gobi is part of the Tentative list of Mongolia in order to qualify for inclusion in the World Heritage List.

The Cretaceous Dinosaur Fossil Sites in the Mongolian Gobi comprises 13 sites in three clusters representing the final phase of dinosaur evolution. The Mongolian Gobi Desert is the largest dinosaur fossil reservoir in the world. More than 80 dinosaur genera have been found and over 60 fossils have been discovered.

Map of Cretaceous Dinosaur Fossil Sites in the Mongolian Gobi

On an 8-day road trip to the Gobi desert in the summer of 2005 we also visited Bayanzag which do indeed look and feel like flaming cliffs when you are stuck trying to push your car out of the sand in 40+ degrees. Having driven past dozens of horse skeletons daily certainly highlighted the seriousness of being prepared in such a remote area. On the dinosaur theme we also visited the Natural History Museum in Yolyn Am which had several fossils found locally including eggs. We ended up sleeping in a back room in the museum for lack of anywhere else to stay at the time too. Nothing came alive in the night ;) As the largest source of dinosaur fossils in the world this should be an easy and automatic nomination, or at worst combined with the other Gobi TWHS. 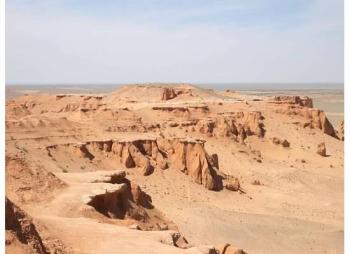 I began my trip in Ulaanbaatar, where I stayed at the Ulaanbaatar Hotel, opened in 1961 and the city's oldest hotel (www.ubhotel.mn/), and ate hot pot at The Bull and the foreign version of Mongolian barbecue at bd's Mongolian Grill, opened in 2005 and the first U.S.-based restaurant to open a franchise in Mongolia (www.gomongo.com). I spent a day visiting the city's very few sites, including the Gandantegchinlen Monastery, but the best experiences in Mongolia are outside its capital. I flew to Dalanzadgad, the gateway to the Gobi desert, where I stayed at the Three Camel Lodge (www.threecamellodge.com/), and visited Yolyn Am gorge and Bayanzag (also known as the Flaming Cliffs). Bayanzag, where Roy Chapman Andrews made several important discoveries of dinosaur fossils, including the first discovery of dinosaur eggs, in the 1920s, is on the tentative list of UNESCO World Heritage Sites as one of the Cretaceous Dinosaur Fossil Sites in the Mongolian Gobi.