Íznik is part of the Tentative list of Turkey in order to qualify for inclusion in the World Heritage List.

İznik is historically known as a center for ceramic production. The İznik tiles spread across the Ottoman Empire and to the museums of the world. Historically it was called Nicaea, known for the Christian landmark council of bishops: “the first Council of Nicae”. It also was the Seljuk and Ottoman capital for short periods. 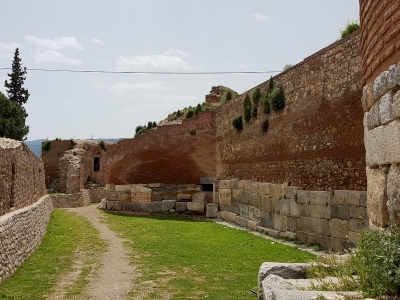 Iznik now is a small and insignificant town not very far from Istanbul but centuries ago it was an important center of Byzantine empire and then, for a a short period, the capital of Ottoman empire. First soup kitchen in the world was founded in Iznik. Later Iznik became famous of its ceramic industry. For Western culture Iznik is much better known under its latin name Nicaea. It was this place that hosted the Counsils of Nicaea and creed that was adopted after The First Council of Nicaea is until now named the Nicene Creed and is used in Christian liturgy all over the world.

Not too much if left from the Christian heritage of Nicaea but quite a lot survived from Byzantine and newer periods. These are mainly fabulous city walls, that, although crossed by more modern roads, until now surround the town. Most of the walls survived but of course they require reconstruction. So far only the most important parts, such as city walls, have already been or are being reconstructed. Most of the elements, such as arches or reliefs, survived in original and now are significant tourist attractions. After the Turkish government finishes the reconstruction, the inscription of Iznik on World Heritage List can have quite a chance. Based on what I saw, I won’t be disappointed seeing Iznik as a WHS.