Cellular Jail, Andaman Islands is part of the Tentative list of India in order to qualify for inclusion in the World Heritage List.

The Cellular Jail was a penal camp on the remote Andaman Islands built by the colonial British. It held political prisoners between 1906 and 1947. Its design of seven wings radiating from a central watchtower was built on the Panopticon theory. The name, "cellular jail", derived from the solitary cells to which the prisoners were confined. The stories of the hard circumstances and the maltreatment fed the Indian Freedom struggle. 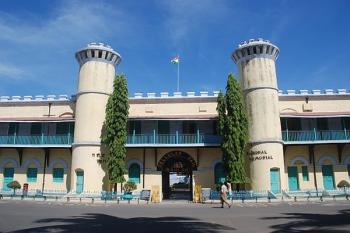 I visited the Andaman Islands in December 2011. I stayed at Hotel Megapode Nest in Port Blair, a short walk from the Cellular Jail National Memorial, a former British prison. I also took a boat to nearby Ross Island to visit the ruins of the former administrative headquarters for the British in the Andaman Islands.