The historical surroundings of Crimean Khans' capital in Bakhchysarai

The historical surroundings of Crimean Khans' capital in Bakhchysarai is part of the Tentative list of Ukraine in order to qualify for inclusion in the World Heritage List.

Bakhchysarai was the capital of the Khanate of Crimea from the beginning of the 16th century until the end of the 18th century. The historical surroundings of Bakhchysarai include the Khan's Palace in the city centre, a complex of buildings in the suburb of Salachik and the Chufut-Kale Fortress about 2.5 kilometres to the east. The Khan Palace of Bakhchysaraj is also on the Tentative List as a single proposal.

Map of The historical surroundings of Crimean Khans' capital in Bakhchysarai 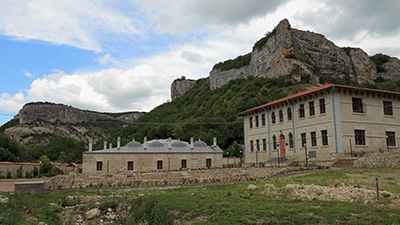 I visited this site during my tour of Ukraine on July 2013. The former capital of Crimean Khanate with its diverse cultural sites and great sceneries made a good impression on me, and it is also a very nice place to visit. Bakhchysarai is one of those sites which deserve to be included to the World Heritage List, but the current situation is very difficult for it.

A bus trip from Sevastopol to the city of Bakhchysarai is about one and a half hour. In the city I quickly realised how Turkish the atmosphere is: the people, the buildings, and food served in the restaurants. Soon it was clear that I was going to like this place. Bakhchysarai is a nice place both for its cultural sights and also for outdoor activities. During my visit I saw lots of hikers, cyclists and rock climbers. After I had visited the Khan’s Palace I walked along the valley floor all the way to the foothills of Chufut-Kale and visited all the major sights along the route.

Many people know Bakhchysarai only for the Khan’s Palace, and it is a clear highlight for sure. But on this TWHS there are sites on three clusters: the city of Bakhchysarai, the Salachik district and the cave city of Chufut-Kale. It is about five kilometres walk from the centre of Bakhchysarai to Chufut-Kale. Apart from the well preserved and beautiful ensemble of the former Palace of Crimean Khans there are lots of small mosques, the most interesting of which is Tahtali-Jami. The city is built on a narrow valley between steep cliffs. Leaving the city to east the road goes along the bottom of the valley. There are lots of caves and holes on the surrounding cliffs. Two kilometres from the Khan’s Palace is the Salachik district which is the site of the original palace of the Crimean Khans, Devlet Saray. In Salachik is the Zincirli Madrasa (in the picture) which is an interesting example of the history of Crimean Tatars. Beside the madrasa are the remains of ancient palace, Mausoleum of Hacı Giray Khan (a founder of Crimean Khanate), and a historical museum. In Salachik the road turns to south-east, and after 500 metres walk is the Svyato-Uspenskiy or Holy Assumption Cave Monastery which is the largest Orthodox monastery of Crimea. One and a half kilometres from the monastery is a medieval city-fortress of Chufut-Kale which is an impressive and historically interesting site with great landscapes.

A historical settlement of Eski Yurt belongs also to the notable sights of Bakhchysarai but I didn’t visit it. Eski Yurt consists of four mausoleums and a small minaret which are located near the railway station amidst a private housing area.

Why the monuments of Bakhchysarai valley would be a good choice for World Heritage List? This tentative site represents different phases of the history of Crimea, and especially the culture of the unique community of Crimean Tatars. The Khan’s Palace alone would probably be worth of inscription. Chufut-Kale is the most famous of the fortified cave cities of Crimea which could also have potential as a serial tentative site. Overall, it is easy to find a lot worse existing World Heritage Sites than some of the single components of this TWHS.

The situation of this TWHS is particularly difficult. It has failed already two times (incomplete, not examined) so it would need some sharpening of the nomination documents. And the timing is not right. I doubt that Ukraine would bid for it under current circumstances. For what it is I would strongly support the inscription of Bakhchysarai and its surroundings but not in current situation in Crimea.

As "Historic environment of the Crimean Khans

The historical surroundings of Crimean Khans' capital in Bakhchysarai (T)