Puente de Occidente (Western Bridge) is part of the Tentative list of Colombia in order to qualify for inclusion in the World Heritage List.

The Puente de Occidente is a 291m long suspension bridge from 1895. In addition to imported steel and iron, local wood was used to finalize the design and the construction. At the time it was one of the most advanced civil engineering works works in Latin American. 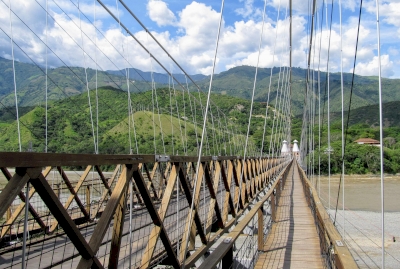 For a site that isn't particularly hard to visit, it is surprising how few foreign tourists make it out to see this bridge. The bridge itself is about 5km outside the small colonial town of Santa Fe de Antioquia which is itself worthy of a visit for those not generally burned out on colonial Spanish towns in South America. It is a wonder that it isn't included as its own TWHS actually. Both are only about 50km from Medellin and it is an easy and pleasant day trip to take in both Santa Fe and the bridge and make it back to the city in time for dinner.

At the time of its opening in 1895, Puente de Occidente was one of the longest suspension bridges in the world and the longest in South America with structural similarities to the Brooklyn Bridge on which the local engineer had previously worked. Although it was originally opened only for pedestrian traffic, after several restorations there is now a central section for light vehicles and pedestrian paths on either side.

I don't really understand architectural nominations and their overall value, but the bridge and setting are beautiful and we didn't regret the day spent visiting. From Santa Fe de Antioquia tuk-tuks will offer to take you to the bridge and wait for 20-30 minutes while you walk across before heading back to town.