Historic Town of Birgi is part of the Tentative list of Turkey in order to qualify for inclusion in the World Heritage List.

Birgi is a town with Phrygian origins. It was the capital of the Aydınoğlu Sultanate, until it was taken over by the Ottoman Empire in the 15th century. The 14th century Aydınoğlu Mehmet Bey Mosque (or Great Mosque) with wooden decoration is its most notable monument.

Map of Historic Town of Birgi 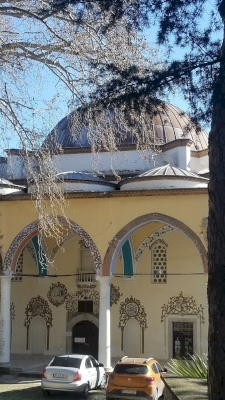 Wow what a waste of time. Maybe the idea if idyllic village near the mountains is what drives tourists, not that I saw any, into this village (definitely not a TOWN). While you can reach it via tiny roads from the north it's better to drive the 2h from Izmir on the Dxxx, with the road conditions deteriorating more and more as you get closer to the mountains.

There is a huge sign at the entrance, faded as if it's from the 80s, and only in Turkish. So O had to make my way around myself. I don't recommend trying to drive to the eastern part as the small roads could block you off suddenly. The best is to stop at the mosque, look at that, it's probably the highlight anyway, and the walk a circle to see some of the traditionally houses. By traditional, it's hard to say which one is old or built within the last decades. They are also nestled within modern buildings and it's not pleasing to the eye. Once in a while you see a row of houses, more picturesque, but they also also not old. Celebrating a building style with a heritage award doesn't seem right. This ain't exactly the Trullis.

There are accommodatiom options in the village but you are better off just spending an hour walking around before driving back and wondering if it was all worth the effort.