Chor-Bakr is part of the Tentative list of Uzbekistan in order to qualify for inclusion in the World Heritage List.

Chor-Bakr (also included in both serial nominations “Silk Roads Sites in Uzbekistan” and “Silk Roads: Zarafshan-Karakum Corridor”) is a necropolis and memorial complex built on the prospective burial place of Abu-Bakr-Said, a descendant of the prophet, who died in 936 and was later developed until the 16th century. It is in the outskirts of Bukhara. 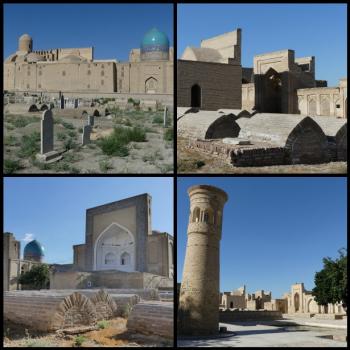 I visited this tentative WHS in June 2017. It is in the outskirts of Bukhara and is practically the 'poorer' equivalent of the inscribed Shahi-Zinda Necropolis in Samarkand.

Nonetheless, it would be a very valid extension to Bukhara in my opinion (instead of a separate inscription). Again there is a plaque wrongly stating that this site is already inscribed as a UNESCO WHS.