Gasumo, la source la plus méridionale du Nil is part of the Tentative list of Burundi in order to qualify for inclusion in the World Heritage List.

At Gasumo, a trickle of water coming out of the northern flank of Mount Gikizi is seen as the southernmost source of the (White) Nile. It was discovered in 1937 by the German explorer Waldecker. A pyramid that symbolizes this long sought after discovery was established in 1938, on the top of the Mount Gikizi. 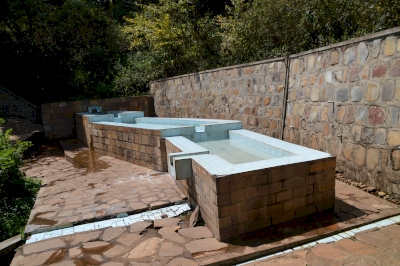 In September 2019, I visited the tentative site with the least likely chance of being elevated to the list of World Heritage Sites.  While driving around central Burundi, we made a brief stop at what purports to be the southernmost source of the Nile, once permitted to flow freely and naturally, but recently tiled and made to look like a bathtub.