Welwitschia Plains is part of the Tentative list of Namibia in order to qualify for inclusion in the World Heritage List.

The Welwitschia Plains have the highest concentration of Welwitschia mirabilis plants (Welwitschia) in Namibia. They are situated approximately 30 - 50 km inland from Swakopmund, roughly lying between the Swakopmund River and Khan River. They form part of the hyper-arid gravel plains of the Namib Desert. 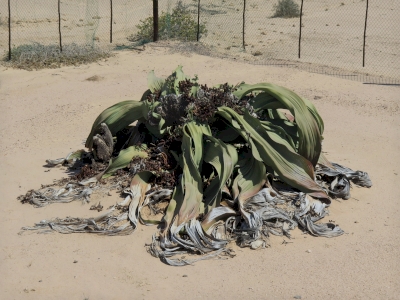 It's something special to stand next to one of the oldest plants in the world. Sure, trees get much older and are really epic too and I have scuba dived next to sponges and giant clams that are several thousand years old, but the location of the Welwitschia is remarkable on its own. They only grow in the Namid Desert of Namibia and Angola. Wikipedia states that the ones in Angola are better protected due to landmines. Either way, the locations are often far off the beaten track and I think the only luxurious way to see them is on the Welwitschia Trail near Swakopmund, West Namibia, a very popular tourist place alone and I believe this is the site Namibia wants to inscribe. The trail, permit required but not really checked (I like the honor system), takes you past the moon landscape with magnificent viewpoints. You can skip this and take the next road into the rough terrain but why miss this?! From Swakopmund it takes around 50min to reach the first batch of Welwitschia mirabilis. I figured they are big already but later was corrected by the kaiser of all Welwitschias. At the first small road stop they encircled some with rocks. Stepping too close on the sand will interfere with their connection the roots have with the fog-dampened upper layers and harm the plant. The ones here were already badly damaged and you can see some idiot drove right next to them and back out onto the road. There are many, many plants here but you can get the idea already. One had a sign to say it is male, really helpful. I wasn't sure what else to expect but drove on and the sign for “Welwitschia” was still pointing me somewhere. A few minutes later I arrived at a picnic site with toilets, shaded tables and a fenced off plant. This one is huuuuuuge, approximately 1,500 years old and looking much healthier than the earlier ones. The rickety steps to the platform provide a nice view although the fence is badly damaged and wouldn't keep any keen photographer/explorer/idiot out. I actually didn't go closer and just circled the fence.

The plants are remarkable and I would hope they get better protection and I wish they get world heritage status. Interesting fact: it is on the coat of arms of Namibia. 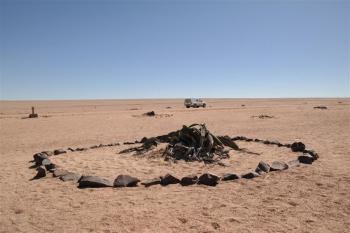 The Welwitschia Mirabilis is a large plant which only grows in Namibia and Angola, and can become very old (1.500 - 2.000 years).

Probably the best way to appreciate the Welwitschia Plains is to follow the 'Welwithschia Drive' which starts some kilometers outside the town of Swakopmund and takes about 3-4 hours. On our map is was labelled as 4x4 but you don't really need one, although it is recommended.

Since the drive is located in the Namib-Naukluft National Park, you will need a permit which can be obtained in Swakopmund. There are no gates and we did not see any guards so you risk to go without permit but given the low price it's better to have one.