Les villes antiques de la Narbonnaise et leur territoire: Nimes, Arles, Glanum, aqueducs, via Domitia is part of the Tentative list of France in order to qualify for inclusion in the World Heritage List. It is a proposed extension of Arles WHS.

Les villes antiques de la Narbonnaise comprise urban monuments, remains of aqueducts and Roman roads in the region of the former Roman province of Narbonensis. In addition to the already inscribed Arles and Nîmes, which have a separate TWHS entry, Glanum is the most important component of this serial proposal. The archaeological site of Glanum consists of the ruins of the Roman city centre and two well preserved monuments outside the ancient city walls: a triumphal arch and the Mausoleum of the Julii. 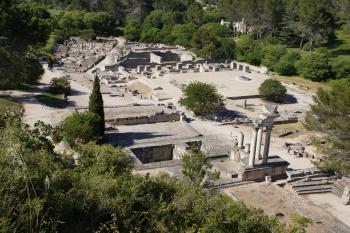