The Industrial Complexes at Ostrava

The Industrial Complexes at Ostrava is part of the Tentative list of Czechia in order to qualify for inclusion in the World Heritage List.

The Industrial Complexes at Ostrava comprise, in a single locality, coal mines, coking plants and blast furnaces needed for the production of iron. They were established in an area called Lower Vítkovice in the early 19th century. It was shut down in 1998.

Map of The Industrial Complexes at Ostrava 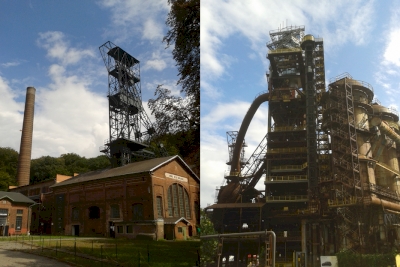 During the last weekend of Summer holidays 2021, I finally managed to visit all the nominated industrial monuments of Ostrava, which were included to the tentative list some 20 years ago. It seems that the nomination is in a dormant state, and no further action of the state party of Czechia is foreseen... Even though I really enjoyed my visit, and the Ostrava agglomeration was the biggest and the most important hub of the coal mining and iron production of the Austrian-Hungarian Empire as well as socialistic Czechoslovakia, it has no chance to be inscribe in my opinion. If you look at the list, there are already plenty of coal and iron relate sites, and do we really need more industrial Art Deco brick buildings, mining towers, and mining sites in general to be on the list? Even the story about a little village which turned into an industrial Magalopolis because of very rich deposits of coal is not very innovative. It does not mean that the site is bad, it is really great and the industrial heritage became the important "selling point" of Ostrava in 21th Century even without the WHS status. The coal mining stopped some 30 years ago. Nowadays, it is cheaper to buy iron and coal from China than produce it in situ. Thus, there was a danger of rapid decline of Ostrava. Fortunately, it did not happened and Ostrava is now green city with culture life which even Prague can only dream about.

1) The Lower Vítkovice area (Dolní oblast Vítkovice) with Hlubina mine is located close to the city center reachable by tram or even by walk. The area is kind of unique worldwide, because it combines the coal mine (Hlubina coal mine), coke ovens, and blast furnaces (only one has survived) for the iron production at one small place (around 15 ha). After the end of operation in 90s, it was declared as the national monument and fortunately turned into the site of culture (concerts, museums, exhibitions, etc.). The most interesting is the Bolt Tower (PHOTO - right), which is a new bolt-like construction siting on the top of the blast furnace. There is Café Bolt with obligatory reservation (the access is limited from safety reasons). I visited the Bolt tower in the frame of a guided tour about the iron production and the history of the site in general. The tour took some 2 hours and booking well in advance is highly recommended, because it is quite popular for tourists. Furthermore, there are beautiful views all around!

2) Landek with Anselm mine (PHOTO - left) is a green hill located to the north from the main railway station. The area has documented one of the earliest coal mining activities in the Ostrava region (the end of 18th Century). According to the archeology, there is the oldest evidence of use of coal for heating by cavemen in the world! However, the brick buildings with Art Deco details are around 100 years old. There are two tours available (I have not visited, because I was in Michal mine day before): the shorter one is related to history of the mine rescue service, and the regular one (around 2 hours) includes the visit to the shaft (it goes down to around 6 meters, but the shaft is deep around 600 m). Another attraction is the mining train and there is the small loop arranged for the tourists. Around the mine there is also the open air exhibition of the mining technique, several restaurants etc. Very interesting is also to go a bit further and see the coal seams visible on the Landek hill slopes, which is a part of the natural reserve. To sum up, this component is really prepared for the tourist and it is already quite popular.

3) Michal mine (former Petr Cingr mine) is located in the district Michálkovice, and it is reachable by trolleybus 104 from the city center. The mine is declared as the national monument and it survived in almost intact state. I went for the guided tour (every two hours at 9, 11, 13, and 15h) and it was really very interesting, because we were guided by the retired miner who knows all the details about history and operation of the mine. There is also a restaurant located in the former women showers. As the coal mining and the iron production business were started and run by the Rothschild family, most of the mine buildings in Michal, Hlubina and Anselm (and also other mines not included to the nomination) share their architectonic appearance and structure. By the way, I was surprised by rather inadequate Art Nouveau stuccoes in the men showers of Michal mine. Two miners colonies are located nearby the mine. It was found out by the mine owners very soon that the social aspect was beneficial not only for the workers but also for the efficiency of the coal production.

4) The last component - Vrbice ventilation shaft - is a bit complicated to visit. It is located quite close to the main railway station, but it is closed and not accessible for visitors at all now. It is surrounded by a motor highway, railway tracks, a deposit of communal waste, thus, a walking there is not very good idea. Paradoxically, the site has been meticulously reconstructed very recently and it is the most valuable component of this TWHS from the point of view of architecture. My tour to Vrbice ventilation shaft resembled the visit of Stoclet Palace... I did it in line with the official recommendations that the site is best seen through the window of passing trains, because it is located very close to the railway between Ostrava main station and Bohumín station. Thus, I could see the fine Art Deco brick facades only for few seconds from the window of a local train.

The important issue with the mining and industrial complexes is that they have not been built as the historical monuments but for the profit. For example, a blast furnace is designed for 10 years long non-stop iron production. After that it is destroyed and new one is built at the place of the old one. It turns in the situation that we can see the enormous masses of rusty pipes and sheet metal in The Lower Vítkovice area that have to be maintained and conserved somehow as it becomes the national heritage monument.

All in all, the sites of this TWHS are great, perfectly prepared for the tourists (with the exception of Vrbice component) and visit is highly recommended. Even if it is one of the biggest and oldest site related to the coal mining and iron production in Europe, I am skeptical about its chances for the inscription. The list is already over-represented by similar sites. I guess that the state party is aware of that. On the other hand, the industrial heritage is nicely maintained and propagated by the regional government, and it is now becoming the main attraction for tourists visiting the Ostrava region.