Mardin Cultural Landscape is part of the Tentative list of Turkey in order to qualify for inclusion in the World Heritage List.

Mardin Cultural Landscape comprises a medieval city built on a rocky, terraced hill. Its architecture is mostly vernacular. It has a long Assyrian and Armenian Christian history. The most notable Christian monument is the Deyrulzafaran Monastery, which lies 5km outside of town. This Syriac Orthodox monastery is a living religious center. 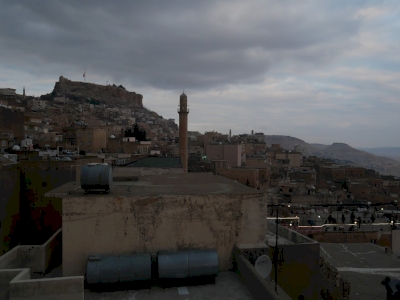 More by coincidence, I ended up staying two nights in Mardin. I had two free days left and wanted to spend them in a warmer region than freezing Anatolia. My return flight out was from Diyarbakir... And the Mardin area seemed to hold a few tentatives of unknown repute.

Looking back, I am really happy for the slight Southern detour. Mardin was a great base to explore the Mesopotamian borderlands of Turkey. The town itself is pleasant and really popular with Turkish tourists. It's built against a scenic rock with the castle on top. Scattered around town you find several old mosques, churches and madrasas along cobble stone streets.

I stayed in a nice historic hotel in the town. While I generally appreciated the experience (best part of my visit to Mardin proper), the 4* hotel left some things to be desired (hot water, internet, new towels). But they helped get a driver to take me around the area the next day.

As much as Turkish visitors enjoy Mardin, it was deservedly deferred by Icomos and referred by the WHC. It neither scores highly in terms of consistency of the old town (plenty of modern, concrete buildings in between), nor the quality of specific components.

I would assume the Turkish authorities have reached the same conclusion as they created a new nomination for Late Antique and Medieval Churches and Monasteries of Midyat and Surrounding Area. This includes the best component of the Mardin tentative site, Deyrulzafaran Monastery. And the incredible Mor Gabriel...

And while many travel reviews diss Midyat as the lesser Mardin, I came out the other way around. Midyat has a more consistent core and I found my visit more enjoyable. Main difference is that it's not located on a hill.

I came by bus from Urfa. The bus station (otogar) is on the eastern side of the town. Diyarbakir, meanwhile, has no buses, only dolmus. These don't start at the otogar, but more north west of the town. On the route to Diyarbakir a stop at Zerevan is a must.

Don't get me wrong. I enjoyed Mardin and the whole region a lot. Midyat, the monasteries, Nuseybin for the church and mosque, and Zerevan and Dara for the castles should feature in your travel plans, if you come to Mardin or Turkey in general.

2003 Requested by State Party to not be examined

ICOMOS recommended "rejection" and Turkey withdrew it before the WHC