Trade Pilgrimage Routes of North-Western Ghana is part of the Tentative list of Ghana in order to qualify for inclusion in the World Heritage List. 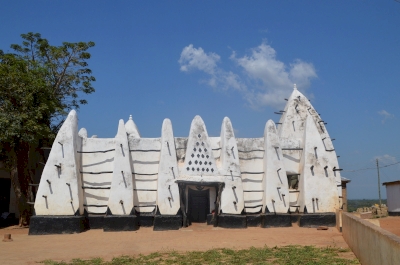 While returning from Mole National Park to Tamale, I stopped briefly in Larabanga in northern Ghana to visit its whitewashed mud-plaster and wooden-beam mosque, which will celebrate its six hundredth anniversary in two years, making it the oldest mosque in the country and one of the oldest in West Africa and earning it the nickname the Mecca of West Africa.