The Site of Ancient Town of Pyanjekent

The Site of Ancient Town of Pyanjekent is part of the Tentative list of Tajikistan in order to qualify for inclusion in the World Heritage List.

The Site of Ancient Town of Pyanjekent (also called Penjikent) (also included in the serial nominations “Silk Road Sites in Tajikistan”, and “Silk Roads: Zarafshan-Karakum Corridor”) was a big city of the pre-Islamic civilization of the Sogn in the 5the to 8th century. There is a vast three-walled citadel and a huge city, over 35 hectares. Numerous well preserved murals were found in this site, with depicts daily life and battle of the time. Those murals are exposed in the Hermitage museum in St-Petersburg, in the National Museum of Antiquities of Tajikistan in Dushanbe and in the local museum).

Map of The Site of Ancient Town of Pyanjekent 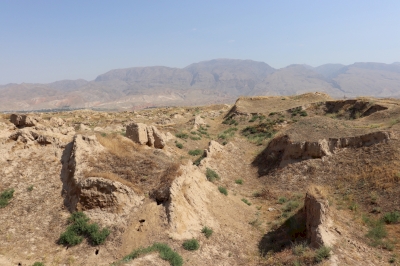 The site of ancient town of Penjakent lies on a hill just south of the modern town. It is within walking distance (1 km) from the town center. Penjakent is 60 km of Samarkand and the border between the two countries is now open (for most, e-visa necessary for Tajikistan, but no visa anymore for Uzbekistan).

It is on Tajikistan TL twice (on its own right, and as part of the “Silk Roads Sites in TJ” serial project). It is also part of a trans-national serial nomination called Silk Road: Penjikent-Samarkand-Poykent (or Zarafshan) Corridor, referred in 2014, but still being worked on.

It consists of a citadel in the west, with three belts of fortifications and the vast city proper, on the east, defended by fortress wall. The city was built in the V century. The total area is large with 35,5 hectares of ruins and walls.

In the city, remains of two temples, streets, shops, workshops, markets, multiroom two- and even three-story dwelling houses can be seen. Some of the richest houses were decorated with wall paintings and wooden statues, most of them now in display in the Hermitage Museum in Saint-Petersburg. A few can be seen in the Rudaki Museum in central Panjakent. On the southern end of the site lies a very small museum with mostly reproduction of those wall paintings, and a few original artifacts.

This site is vast, and makes a pleasant walk. The remains od the city are not clear, and you need some imagination to see the city as it was. Views on the modern city are great as on the mountains are on both side of the valley. 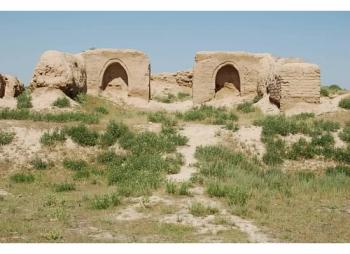 In May 2007, I visited from Samarkand, Uzbekistan, making a day trip visit to Penjikent, a city a few miles from the Uzbek/Tajik border -- the ruins of Penjikent were unspectacular, but the bazaar was colorful and photogenic. The trip required a double entry Uzbek visa. The overland border crossing between Samarkand and Penjikent may now be closed, so instead a visitor would be required to make a lengthy journey from Dushanbe.

Unesco Website: The Site of Ancient Town of Pyanjekent

The Site of Ancient Town of Pyanjekent (T)