Baquedano Street is part of the Tentative list of Chile in order to qualify for inclusion in the World Heritage List.

Baquedano Street is a long avenue in the historic center of Iquique with stores and residences of foreigners who made their fortunes in the nitrate business. The sodium nitrate industry boomed here in the late 19th century and put the remote city in contact with ports all over the world. The architectural style used is described as “American” with verandas and balconies. 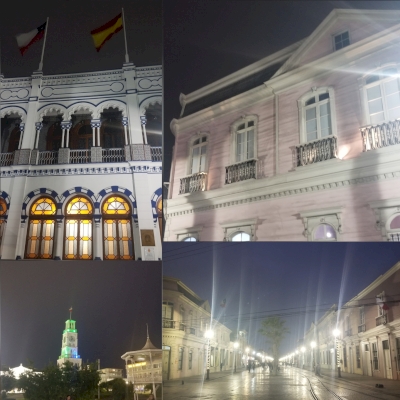 What else can you do in Iquique in early spring when the beach is still cold? Once you have visited Humberstone I asked the taxi to drop me off at Paseo Baquedano. It was already dark but it doesn't matter because I think the lights make it nicer than it really is. The northern side has many fancy restaurants (but overpriced), the clock tower/fountain combo (Torre de Reloj) which attracts a large group of Pokemon Go players for some reason, the pagoda and the teatro Tetro Municipal. They look recently polished. The further south you go the emptier it gets. There are still a few bars, one especially popular, but the building facades are also more run down. A few stand out as extravagant with balcony and columns but there are many generic ones.

It's a fancy pedestrian hangout but in no way wordly unique and I can't even see this being attached to the saltpeter WHS outside of town. Was definitely nice and worth a visit though.

We were in Iquique anyway to visit the Humberstone WHS so had the opportunity to see Baquedano street which, other than the (cold) beach seemed to be the only thing to do in the city itself. Iquique was historically significant as a major export port for the saltpeter industry coming from the likes of Humberstone. As such, although it was isolated on a hostile, desert coast, it continued to grow and prosper along with the nearby mining industry and had a significant international population which influenced the architecture and lifestyle of the area from the late 1800's to early 1900's.

Baquedano street runs for about 1 km from the coast to the small but pretty Prat square is the remainder of the wealth and glory days with many fine homes and buildings built by the wealthy of the time. It has mostly been restored and other than the street tram is pedestrianized. Our visit was short but sweet and certainly worthwhile if in the area already. It has the international connection that Unesco looks for but as a stand alone inscription seems weak. Mentally we just tried to consider it as an extention of the Humberstone WHS because they are so closely linked.

Visited the site in 2006, it is a main historical street in the town, full of old houses, track of former tram, all beautifully restored. It preserved its original charm, once you are the you can feel like in the end of XIX century. Particular buildings are not architectural masterpieces but they are nice as a complex. Buidings are a little bit similar to those in Valparaiso and Sewell