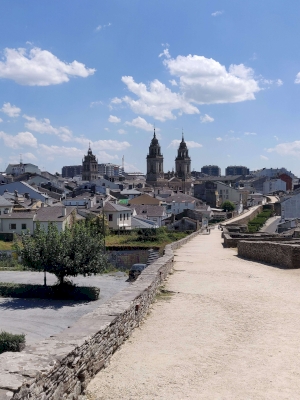 During my visit of Galicia in August 2022, I spent one day in Lugo to explore the town and its two WHS: the Roman walls and its cathedral.

I went there by car, drove under one of the gates and parked within the Roman walls. I first went for a stroll to get a feel of the town and to visit the tourist office, that also offers an interpretation centre for the Walls. Unfortunately, it’s only in Spanish, so I whizzed through looking at some of the pictures about the construction of the wall.

I went for a small walk around the outside of the wall and then did the whole tour of the town on top of the walls starting at the ramp in front of the cathedral, where you will also find a stele with the Unesco symbol. The wall doesn’t offer many places with shade, so a walk on the walls maybe wasn’t the best idea when the sun is at its highest and hottest, but it gave me something to do during the time most of the other sites were closed because of the siesta. There are nice views over the historic centre, but you also have parts where you just see less attractive backs of houses.

To get a better understanding of the Roman history of Lugo, or “Lucus Augusti” as it was called in those days, I visited the Provincial Museum, which has some Roman mosaics and other objects from the Roman period. There is the University Museum “A Domus do Mitreo”, where you can see the rests of a Roman house with a Mithraeum. On the Rúa Doutor Castro, there is the “Casa dos Mosaicos”, where you can still see Roman mosaics in situ. A short video, only in Spanish, tells the story of the house. The person in charge was very friendly and explained the different parts of the house to me in English. Parts of the street also have glass tiles that show the mosaics that lie under it.The exposition hall just outside the Porta Miñá also housed an exposition on the Roman history of Lugo, completed with a video of how the town evolved from Roman times to today.

The Provincial Museum, the “Casa dos Mosaicos” and the Porta Miñá expositio hall were free and I feel they completed the picture of the Roman history of Lugo, of which the Walls form an important part. 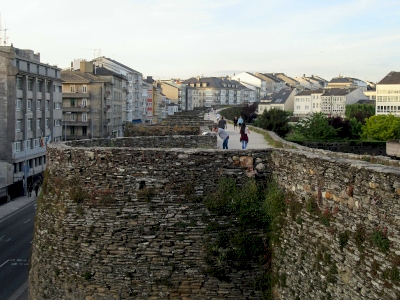 The Romans left a mark on northwestern Spain that can still be seen today in bridges, ancient villages, gold mines, a lighthouse, and, most spectacularly, the Roman Walls of Lugo. I visited the latter when hiking parts of the Camino Primitivo in May 2019. This is one of two World Heritage Sites I visited on that trip to Spain that were famed for their walls (the other, Avila), and I have to say I preferred these walls. I circumnavigated Lugo twice, once following the perimeter at ground level, and once on the ramparts. Both trips gave a good perspective of the walls' height and width, which really must be seen to be appreciated. In the evening, quite a lot of locals come out for exercise jogging or walking around the walls. There's really not a lot more to say about this site -- the walls are remarkably intact and they so far have stood the test of time.

The history of Lugo, however, gave me a greater appreciation for how this corner of the Roman empire fits into world history. Lugo was likely originally named after the Celtic god Lugus, since Gallaecia, now known as Galicia, was home to the Gaels who settled Ireland (and, in fact, you can still hear bagpipes played in Galicia). The town was renamed Lucus Augusti when the Romans came to Galicia to mine gold for use in jewelry, art, and coins. The town became the most important for the Romans in Galicia, and in the 3rd century the Romans constructed the walls around Lugo not just to protect against outsiders, but also against local tribesmen unhappy with the Romans. They ultimately failed, as the Romans were defeated in the fifth century. Over time Lugo became a stop on the original pilgrimage route to Santiago de Compostela, and it still gets visits today from both pilgrims and enthusiasts of Roman architecture. The walls are certainly worth a visit if you find yourself in northwest Spain.

Logistics: The Roman Walls of Lugo are quite easy to access and traverse on foot. 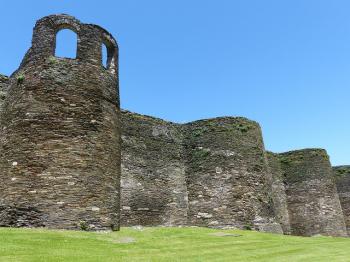 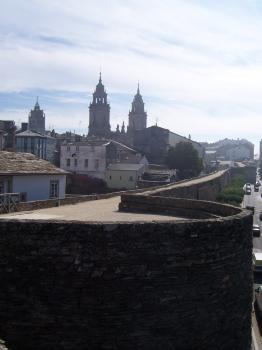 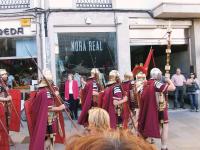 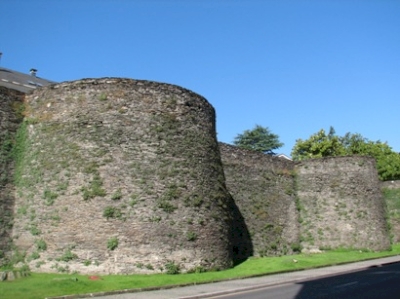 My goal for the day was to walk the entire circuit (2km). I accessed the ramparts from the Rua do Teatro. The most amazing thing, at first sight, is how broad this wall is! Four to seven meters wide apparently. It's just like a major road. The only comparison that directly came to my mind is the City Wall of Xi'an in China (it is newer, 14th century, but even wider). If I remember well, they even allow cyclists there.

Destroyed during invasion: A section of the wall was destroyed in 984, during the siege of the town by Almanzor. (Nomination file, p. 75)

Linear inscriptions: The core zone only exists of the rectangular wall, over 2km long and 4m wide