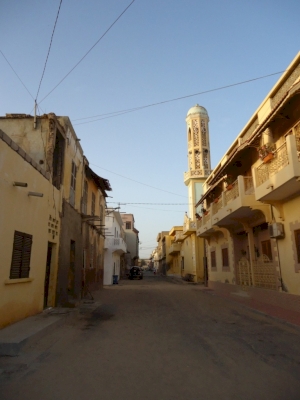 Site visited in April, 2018. Located some 300 km from Dakar to the north, close to Mauritanian border. From Dakar Gare Routiere there are mini buses (stand is located in the middle of bus station) but despite good asphalted road it took full day to reach Saint-Louis, including waiting time in Dakar (in most cases the cars leave when full, leaving hours are not specified). So when you start the journey in the morning it is possible to get to the place late in the afternoon or in the evening the same day.

While approaching Saint-Louis you will encounter huge garbage dump (some 10 km before the town). It is just for you to be prepared what you can expect in the town. And that is terrifying. Rubbish are everywhere, the streets are dirty but more appalling is what you see in the water and areas nearby (have in mind that this is an island). Of course not everywhere. Some streets in the center are more clean but overall first impression is somehow discouraging.

Located in a Former Capital: It has variously been capital of Senegal, Afrique Occidentale Fran?aise (AOF) and Mauritania when that entity was regarded as being separate from AOF.
British Military victories over France: Captured in 1758 during the Seven Year's War :- "The sudden arrival of British troops took the garrison completely by surprise. On 1 May they surrendered the fort, and the resident traders swore allegiance to the British. Not a single Briton had been killed in the taking of the settlement." Was kept by Britain under the 1763 Treaty of Paris but was lost again during the American War of Independence.

Cultural sites taking up an entire island
Built or owned by French: Saint-Louis was the capital of the French colony of Senegal from 1673 until independence in 1960.

World Monuments Watch (past): Saint-Louis Island (2008)
UNESCO Intangible Cultural Heritage Lists: Ceebu Jën, a culinary art of Senegal (2021): "a dish that originated in the fishing communities on the Island of Saint-Louis in Senegal"