The Dacian Fortresses of the Orastie Mountains are Iron Age defense works built as protection against Roman conquest.

They were built between the 1st century B.C. and the 1st A.D. by the Dacians, who lived in what is now Romania (between the Carpathians and the Danube). Six locations are part of this site: Sarmizegetusa Regia, Costesti-Cetatuie, Costesti-Blidaru, Luncani-Piatra Rosie, Bãnita, and Cãpâlna.

Sarmizegetusa Regia was the Dacian capital and the center of its political and religious power. It was built on a fortified mountain. The other sites formed a system of defense works to defend the capital. After their destruction by the Romans in 106, the sites were never reoccupied. 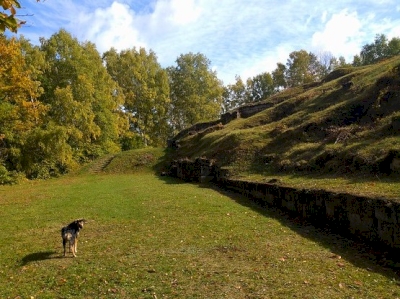 A few days after my visit to Rosia Montana WHS I made my second attempt to visit the main component of this Dacian Fortress WHS, Sarmizegetusa Regia, this time by public transportation.

My first attempt was in winter 2016-17 when I found the ruins covered by snow, as described in my earlier report below. For that trip I rented a car because it appeared too difficult to get to the site without it. I typically like to utilize public transportation in my attempt to immerse myself more in the local scenes, but this time the main reason I did not rent a car was because my California driver's license expired almost 4.5 years ago and cannot be renewed online. The only way for me to renew it now is to physically appear at a DMV in California where I have not been back over 5.5 years.

I was staying in Deva and took a bus to Orastie and another bus to Costești. From there I was hoping to hitchhike to Sarmizegetusa Regia, some 20 km away, thinking having all afternoon in Costești was enough to do so.  As described in my report below, there were a dozen Romanian tourists even during the snowy day in winter, so I thought it couldn't be too difficult to hitch a car. But when I got to Costești by bus, to my bewilderment and disappointment, I hardly saw any cars going in the direction of Sarmizegetusa Regia.

So after some 30 min., instead of waiting around to hitch a car in Costești, I decided to hike up to one of the minor components of this WHS: Blidaru Fortress. This 2 km hike was more strenuous than I expected and took more than one hour to get the fortress. It was of course just a cluster of rocks / ruins over a mound (photo).

A few minutes into the hike I noticed that a dog was following me for unknown reason.  She/He ended up coming all the way up to the ruins. It turned out later that the dog belonged to a cafe in Costești. One month after this trip the same thing happened at the Rocks of Belogradchik Fortress TWHS in Bulgaria: a dog followed me all morning. They were not quite the goat that followed me at the Kotor WHS, but I wouldn't vet them.

So my 2nd attempt failed. This was a story of visiting a minor component of the WHS and failing to visit the major one. I am actually determined to visit Sarmizegetusa Regia one day, but it'll be perhaps after I go back to California the next time.

Visited Sarmizegetusa Regia and Piatra Rosie in 2016 during a 4-night stay in the Pensiunea Ulpia Traiana in Sarmizegetusa, which - as the name may already indicate, has the Roman ruins bordering its garden. The owner of the pensiunea is linked to the Archeology Museum in Sarmizegetusa. He and one of his neighbours drove our 7p. group as private guides in two 4WDs around the area, including the Orastie mountains with a hike inbetween visiting the two fortresses. We also included visits to Densus church, to the Dinosaur Geopark Hateg (with the Sinpetru formation), and to the Retezat mountains in the programme (all on the tentative list), among many other interesting closeby sites.

This way of visting the fortresses and having a local guide with us probably accounts for one of my stars. If I remember correctly, the views from the mountain at Piatra Rosie were more impressive than the overgrown ruins (photo) themselves, but Sarmizegetusa Regia was very nice. 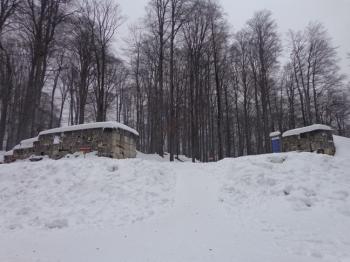 It may not have been such a good idea to try to combine my annual ski trip with visits to World Heritage Sites along the way.

This winter the ski resorts of my choice were Poiana Brasov in Romania and Bansko in Bulgaria.

Accordingly, I attempted to visit the Dacian Fortress at Sarmizegetusa Regia and the Monastery of Horezu in Romania.

I ended up driving on icy roads from Costești to Sarmizegetusa Regia to find the fortress ruins covered by snow.

But there were about a dozen tourists, mostly Romanians. The site officially closes at 15:00 in winter.

Things can change rapidly in Eastern Europe and now it fell out for the best. Sarmisegethuza Regia is never more inaccessible, but neither it is free. (Els please remove it from the FREE list!) The road from Costesti has been repaired some places even tarred this summer, so you can drive up to the entrance easily with an urban car - we did it with a Renault Scenic. At the entrance a ticket booth was erected, there you can buy the entry ticket for 5 lei (cca 1,2 eur). Other kiosks are seemingly under construction -most probably in the next season souvenir shops and buffets will open. When we were there the parking was full, so there will be a considerable demand also. Though the road is significantly better than it was, it is still almost an hour s drive from Costesti where the tar road ends. It is advisable to spend the night there and begin the visit the next morning. As tourism begins to boost, there are a couple of good B&B s now in Costesti. We have found lodging in Pensiunea Cotiso - a place I can recommend to anybody. The place is spotless, meets the European standards, the kitchen is great - they serv traditional local cuisine mainly from ingredients they grow themselves or collect in the woods (mushrooms), and the owners are very hospitable - their daughter, Cristina speaks good English, and they have an English website also. 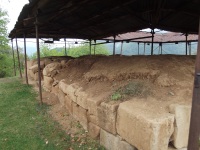 I found the reward for reaching two of the locations somewhat underwhelming given the amount of effort expended reaching them. The were both located at thev tops of vcery steep hills. The two that I reached were :

Calpana - a short distance by taxi from the Calnic fortified church.

Costesti Catatuie - by bus from Orastie to Costesti, then a 2km walk to the bridge where two tracks lead to Cetatuie and Blidaru respectively. 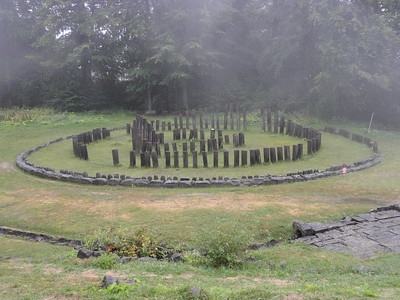 One should get bonus points having visited this remote and obscure site. Only 6 registered WHS enthusiasts did so before me - this puts the Dacian Fortresses on the same difficulty level as Nisa (Turkmenistan) or Sana'a (Yemen). Information about the site, practical or historic, is hard to get. The more interesting ones that I found on the web I've added to the Links section at the left of this webpage.

I planned to visit Costesti (2 locations) and mainly Sarmizegetusa Regia. Finding it is easy nowadays: the Dacian sites of Costesti are signposted from the main road in Orastie. All went very smoothly until I had to start the unpaved road to Sarmizegetusa Regia. It's 18km long and full of potholes. Unfortunately, it rained too, so that made driving there in a non-4WD even more adventurous. My effort ended about 2km from the site, where the road is full of loose stones and starts to go uphill. I didn't want to get stuck here, I doubt there will be more than a handful of visitors daily. So I parked the car at the side of the road and hiked the remaining part. It was still raining but I felt very determined in getting there!

After many turns, I finally arrived at a signboard "Sarmizegetusa Regia". From there it's still a short walk through the forest. There I already saw part of the Dacian road (impressively flat) and defense towers. The main complex is on an open field. I had seen pictures of it beforehand, but I still was impressed by the scale and variety of the remains. Especially the huge solar disc draw my attention.

Rain was still pouring so I didn't stay for long (I was also afraid that all the rain would make the road even worse). But I arrived safely back in Costesti. I had a look around how to get to the two fortresses here, but they are only accessible on foot (40-60 minutes). I decided against that as I already had enough of walking in the rain. On a summer day however this will be a wonderful trip, the scenery along the road is lovely (a river, a couple of farms and a mixed forest).

I have visited almost all Dacian fortresses in 2007. Almost all the places are located in the remote, mountaineous area (you should have a good local map to get there or at least have enough luck to find a person that show you the right direction, 4 wd car is also recommended). The places itself are extremely worth visiting as they are the only surviving examples of once powerful culture of pre-Roman Dacian state. The most important monument is Sarmisegetuza Regia, remnants of Dacian capital with its sanctuaries, walls and other buildings. It is one of Romanian touristic "must".

Dacian Fortresses of the Orastie Mountains

Tips how to get there, and do some geocaching

Romania has recovered more pieces of a valuable ancient treasure which had been stolen from the archaeological site of Sarmisegetusa Regia (13.05.11)

Iron Age: The hill-fort and its evolved successor, the oppidum, were characteristic of the Late Iron Age in Europe (AB ev)
Roman Province in its official title: Dacia. Created 106AD

Located in a Former Capital: Sarmizegetusa Regia was the capital of the Dacians
Total Solar Eclipse since Inscription: 11 August, 1999

Transylvania hotspot: Sarmizegetusa Regia is 134km from Sibiu (car only)