The Historic Centre of Sighisoara is a well preserved small medieval city built by Saxon settlers. It was strategically placed on a hill, City Hill, as protection against Tatars and other invaders from the steppes in the East.

The city played an important commercial role due to its guilds of craftsmen and its position on the trade routes between Central Europe and the Ottoman Empire. It is estimated that during the 16th and the 17th centuries Sighisoara had as many as 15 guilds and 20 handicraft branches.

Both the Upper Town (Citadel) and Lower Town are included. The Citadel is surrounded by a wall with watchtowers, of which 9 out of the original 14 are still standing. A Clock Tower guards the stairway that connects the Lower with the Upper Town. 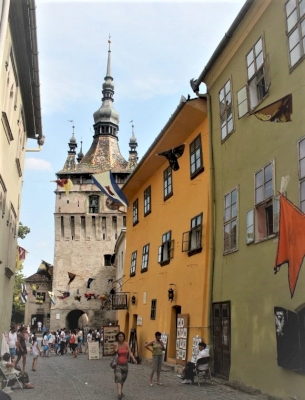 Sighișoara is a small Medieval fortified city, home to an array of churches, townhouses, and defensive works. The Clock Tower is the iconic structure of the city, guarding the main entrance to the citadel. There are a further eight towers that guard the walls of the citadel, each named after the guild of Saxon craftsmen that paid for its construction: Butchers, Bootmakers, Furriers, Ironsmiths, Ropemakers, Tailors, Tanners, and Tinsmiths. Biserica din Deal, the Church on the Hill, is the largest of the churches and its hilltop location offers a great view over the rest of the city with its Medieval core and surrounding suburbs along the banks of the River Târnava Mare. There is a wonderful wooden covered staircase that links the church and adjoining old schoolhouse with the citadel below. The core zone is restricted to the citadel and its immediate surroundings although there are a few good sights beyond, including a 20th Century Byzantine-inspired Orthodox church on the north bank of the river. Beyond the city, the countryside of Mureș, Brașov, and Sibiu counties contains some delightful villages and natural landscapes, including another World Heritage Site in the fortified churches of Biertan, Viscri, and so on.

However, the site that seems to attract the most tourist attention is one yellow house in particular that claims to have been home to Vlad II and Vlad III, father and son who ruled over Wallachia in the 15th Century. Caught between the two great powers of the Kingdom of Hungary to the north and the Ottoman Empire to the south, the Wallachians had no shortage of enemies to contend with externally and internal divisions too, with Romanians, Hungarians, and Saxons all vying for power. Vlad III considered the Saxons, who had made Sighișoara a wealthy town of traders and craftsmen, the chief supporters of his rival for the throne and so looted and pillaged their villages. In the process he killed large numbers of the population and speared their bodies on stakes and so earning the epithet ‘the Impaler’ in the process. Nevertheless, he is considered by some a national hero of Romania for his efforts to secure independence before he died in battle against the Turks in 1477. Today, Vlad III Drăculea is well known in the west as the supposed basis for Bram Stoker’s famed vampire Count Dracula from the novel of 1897. Whilst Stoker was inspired by Romanian folklore of blood-sucking monsters, academics debate how much he actually knew about Vlad III beyond his name. Some argue that he had only seen the name in passing and selected a Transylvanian origin for the fictional Dracula only because the local Székely people, a subgroup of Hungarians, were believed to have descended from the equally cruel and vicious Attila the Hun. Regardless of the truth, the people of Sighișoara take full advantage of this legend to attract tourists and sell vampiric merchandise.

It was near Sighișoara that the Battle of Segesvár took place as part of the Hungarian Revolution of 1848, in which the national poet of Hungary, Sándor Petőfi, perished. It was only with Russian support that Habsburg Austria was able to retain control of Hungary but the event was a key moment in the re-emergence of the national Hungarian identity. Today, however, it is a predominantly Romanian city and there is a statue just below the citadel of a wolf suckling the twins Romulus and Remus, gifted by the city of Rome to solidify the city’s now Latin culture over its Germanic and Hungarian heritage. Sighișoara is a fine example of the confluence of the cultures of central and south-eastern Europe, a medley of Catholic, Lutheran, Orthodox, and (very limited) Islamic influences. It can hardly count as one of the great cities of Europe but I certainly enjoyed walking around for half a day. 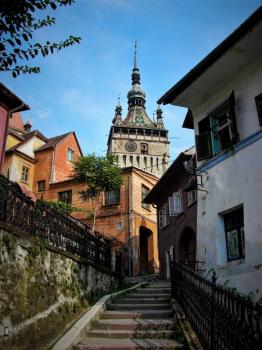 In the 12th century, King Géza II of Hungary invited German craftsmen and merchants, generally known as Transylvanian Saxons, to settle in Transylvania, at the time part of the Kingdom of Hungary, to defend the frontier of the realm. Among the first settlements founded by the Saxons was the town that is now known as Sighișoara (Schäßburg in German).

Later on, during the Mongol Invasion (mid 13th century), many Transylvanian towns were fortified in order to be protected. Seven of the main fortified cities were particularly important and, because of these seven city, Transylvania was called Siebenbürgen in German or Septem Castra in Latin, that literally mean Seven Fortresses. Sighișoara was one of them and played an important role, both military and commercial, in the border region between central and south-eastern Europe.

The Historic Centre of Sighișoara is inscribed in the UNESCO World Heritage list since 1999. The city can be reached easily from any major city in Transylvania by bus or train. I personally went to Sighișoara on a day trip by train from Brașov.

The best way to visit the historic centre of Sighișoara is on foot. The citadel is small and with good weather it is very pleasant to walk along the narrow streets and stop at one of the many cafés for a drink. The citadel is in incredible conditions. It looks and feels as if it still is a medieval town, except for the few cars parked here and there.

At the end of one of the main roads there a stairway, completely covered with a wooden structure, that leads to the Biserica din Deal (literally Church on the hill). The church, one of the most important of Transylvania, dominates the city from the hill and it’s visible from every direction, even from far away.

Another church is the 13th century Biserica Mânăstirii Dominicane, the Monastery Church, which is interesting for the fact that it doesn’t have a bell. It is believed that the Saxons considered the bell of the Church on the Hill enough for the entire city so they didn’t place one on this other church.

The most recognizable landmark of Sighișoara is the Turnul cu Ceas, the Clock Tower. It’s the main entry point of the citadel and with its size it dominates the whole city. The are also several other towers still standing around the citadel, named after different important medieval crafts.

Another curious fact is that Sighișoara is the birthplace of the (in)famous Vlad III the Impaler, better known as Vlad Drăculea or Vlad Dracula, the historical figure who inspired the character of the vampire Count Dracula in Bram Stoker’s novel Dracula.

The inhabited citadel of Sighișoara is the best preserved example of the architecture and culture of the Transylvanian Saxons. Its 850-year history is now coming to an end and the cultural heritage is threatened by the constant emigration of the Saxons toward Germany, where they are still considered citizens. In 2011 the German population was only about 1.5% of the total population of the city. Therefore Sighișoara will remain the only testimony of that particular culture in Transylvania and, thanks to World Heritage List, it will be preserved for the future generations. 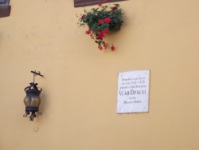 The citadel of Sighisoara compares well with other medieval hilltop towns. Surrounded by defensive walls and towers its colourful streets and squares are full of interest. The covered bridge to the summit is of interest, but the views from the pathway were spectacular.

The town's association with Vlad Dracul (Vlad the Impaler) is another drawcard. 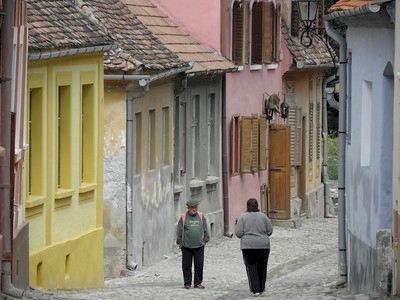 The author of the Bradt Guide for Transylvania goes on and on in her praise for Sighisoara: “… like taking a trip back in time, to an era crowded with vampires, evil counts, wolves, peasants riding through the untamed countryside on horse-drawn carts and tipsy old men tottering along the narrow, winding streets”.

After having visited the site myself, my conclusion is that she must have been living under a stone all her life, or just spent too many years in Romania. It’s a nice town to visit for half a day, but is it any better than a similar medieval city WHS? San Marino (much bigger and more spectacular location), Assisi, or Toledo (both more impressive individual structures) come to my mind. Only these cities were not on the route between Central Europe and the Ottoman Empire… (a regional aspect is what distinguishes it the most).

What I liked best about Sighisoara was the long-covered wooden staircase that leads up to the very top of the hill. It was built to cover schoolchildren and churchgoers from the rain. It reminded me of a similar one at Biertan Church that I visited earlier that day.

Cemeteries: on top of City Hill
Walled cities
Clock Tower: Built in the 14th century as a simple gate tower, in 1604 a wooden clock work was added

Tatars: "Following incursions by the Tatars in 1241, the fortified settlement on City Hill was reinforced with walls, guarded by towers" AB

Legends and Folk Myths: Legend of Vlad the Impaler

Built in the 13th century: "Criterion (iii): Sighisoara is an outstanding testimony to the culture of the Transylvanian Saxons, a culture that is coming to a close after 850 years... In the 13th century, German craftsmen and merchants, known as Saxons, were ordered by the Hungarian sovereigns to colonize Transylvania and protect the border of the Carpathians against the steppe peoples. They settled on a hill, called the City Hill" (AB)

Built or owned by Germans: Built by Saxonian settlers
Minority communities: Sighisoara is an outstanding testimony to the culture of the Transylvanian Saxons, a culture that is coming to a close after 850 years and will continue to exist only through its architectural and urban monuments. (AB evaluation)