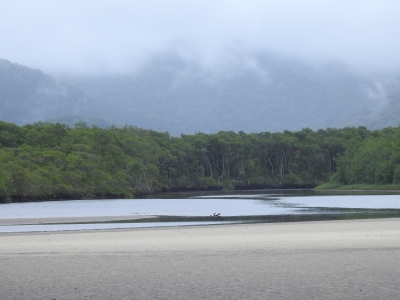 I had already given up on seeing more of these Atlantic Forests than a couple of birds spotted on a short forest walk. But the owner of my pousada kept pushing his contacts for tours to materialize, despite (1) it being a week day while Peruibe & Guarau live on weekend trippers from the big cities, and (2) it had rained consistently all day and the outlook for the next day was only slightly better at ‘medium rain’. Finally, I was able to join a private jeep tour to Praia Caramboré and Barra do Una with a company called Bioventura.

The WHS location that I visited was the Jureia - Itatins Ecological Station, the same as covered by several other community members. Fortunately, it did not rain anymore when we left for the park at 7.30 am the next morning. As others have noted, the road conditions are terrible, and they are even worse after days of rain. But we had a trusty 4WD. The guide, Ed, told that he is participating in jaguar research in the area – but they hadn’t found one yet. Lots of pumas and ocelots though show up on the camera traps. We would see few birds and no mammals during our visit – the forest is too dense and the weather was too cold.

From the village of Guarau, we drove inland to the reserve; it does have a guarded entrance gate, but no fee or other administration is required to enter (more about what is in the core zone and what isn’t at the end of this review). We stopped a few times along the way: once to look at a waterfall with an interesting tree variety at its shore, including invasive species such as the Asian Breadfruit which is common here. The driver also found us some small, sweet bananas with seeds to eat from a wild plant at the roadside.

We parked at the entrance of a well-kept campsite (where we spotted a blood-red Brazilian tanager), and then walked downhill to Praia Caramboré. This is a sweeping beach of the typical Brazilian kind, Fernando de Noronha has many of them as well. Overhead we saw frigate birds fly, and on the beach we found a blue crab. At both ends of the beach, the mountains and rocks reach the sea. They are covered with plants such as bromeliads. What I liked best overall about this WHS visit were the parts like this where the forest and varied lower vegetation (often with flowers) contrast with the sand of the beaches.

Our next stop was Barra do Una. Here the Una River, with “water coloured like tea”, runs into the ocean. It’s a pretty place, with a dense forest and mountains in the background (see photo). It also has a density of mangroves. We met a local family which is the only one living in the Reserve on the ‘other’ side of the river. They had to drive with their ancient truck to the beach, get their boat to cross the river, walk for a bit and then meet up with a pre-arranged driver to bring them to the ‘city’ of Peruibe.

We finished the tour with a walk on Una Beach and a good fish lunch at a local restaurant, before driving all the way back on the bad road.

What is included in the core zone? Looking at the official map, it seems that the whole blackened area north of Iguape and towards Peruibe comprises the core zone of this location. Following that logic, the core zone of the WHS would be larger than the ecological reserve. It would include the town of Guarau for example, and the winding road between Peruibe and Guarau. However, Jureia - Itatins Ecological Station is an IUCN category I protected area; this means for example that “Human visitation is limited to a minimum”. That does not correspond with the number of guesthouses and campings present, especially in the beach areas.

To make things more complex, in 2006 the Jureia - Itatins Ecological Station changed its boundaries and was transformed into the Jureia-Itatins Mosaic, covering also Barra do Una Sustainable Reserve and Intingucu State Park for example (category IV protected areas). These combined cover much more hectares than the original nomination. These changes in management structure are not reflected in any way in the official WH data, there also has been no SOC at all since the inscription in 1999. In my opinion, it is likely that the core zone only covers the strictly protected Jureia - Itatins Ecological Station; the one entered at the gate and also where the Paradise Waterfall is. 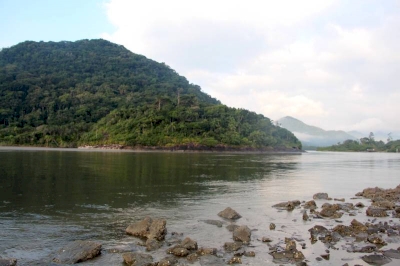 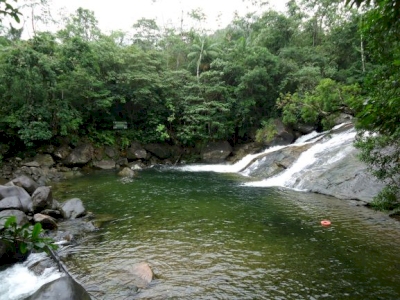