The Historic Centre of the Town of Diamantina comprises a city landscape adapted from European models to an American context.

The city's history began in 1713 when an expedition found diamonds on the mountain slopes and along the rivers in this region. A first settlement was started, Arraial do Tijuco. In 1731 the Portuguese Crown became aware of its wealth and set up a separate body to administer the region. Mining rights were granted to private enterprises at first, but soon the Crown took back ownership.

Mining blossomed in Diamantina in the 18th and early 19th century. After that, richer and better quality deposits in South Africa were found.

Because of this, the historical center of Diamantina has been preserved very well. Some distinct features set it aside from other Portuguese colonial towns (and they can still be seen today): its pavement (large grey stones called capistranas) and the use of wood and adobe on the walls of its houses. 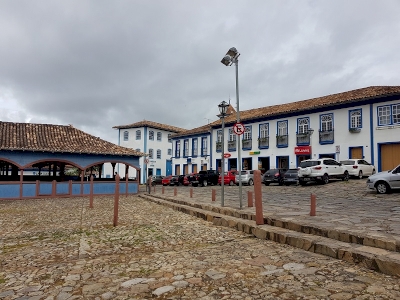 Diamantina, once the beginning of the Gold Trail in Minas Gerais, is now far off the beaten track. During our visit in November 2020, not only were there no foreign tourists here, but even quite a few locals - a great contrast to the crowded Ouro Preto or quite lively smaller towns like Tiradentes or Mariana.

Diamantina differs from other colonial mining towns in Minas Gerais. It is, I would say, more rugged, we also had the impression that it is situated higher in the mountains (not true, the height is almost the same as Ouro Preto). The cobblestone streets seem wider, although this may be an impression due to the lack of crowds. It is difficult for me to find the distinguishing points of this place - for sure, as Solivagant wrote earlier, the local market square stands out. We didn't manage to see the peculiarities of the city as the Diamond Museum was closed due to the pandemic. Despite the lack of characteristic memories, we liked Diamantina, but in general we like nice little towns off the beaten track. And we have to admit that the historic center is wonderfully refurbished, which is simply eye-catching and nice to explore.

You can get to the city by the good road BR-040 and 259, access from Belo Horizonte takes just over 4 hours by car. We chose the slightly longer but more interesting road MG-010, stopping on the way in the beautiful Serra do Cipo national park. For nature lovers along the way there is also Serra do Intendente park with Cachoeira do Tabuleiro waterfall, one of the highest in Brazil. Be warned - the road MG-010 behind the village of Conceicao up to Mato Dentro changes into a dirt road and although it is passable for ordinary cars, it is better to have one with a slightly higher suspension.

Diamantina is 'only' 7 hours away from one of the most wonderful national parks in Brazil - Cavernas do Peruacu, currently on the Tentative List. During our stay, the park was unfortunately closed (as the only one of the Brazilian national parks), but having seen the photos, there is no doubt it is a must see place.

Having recently visited, and seeing as the previous reviews are quite old, I thought it might be time for an update. But actually, it seems like nothing has really changed in 10+ years in Diamantina. Maybe that is the charm. It is far enough from anywhere that it still doesn't see many foreign visitors compared to Ouro Preto and the other colonial Minas towns. Even in colonial times it was remote, being the starting point of the "gold trail" leading to Paraty on the coast.

The horses aren't parked in front of the marketplace anymore but the well preserved centre still retains its easy-going colonial charm. Is it an essential visit to understanding the rich history of Minas Gerais? No. Go to Ouro Preto. If you are short on time it is skipable. If you have the time, the 5 hour journey from Belo Horizonte one way makes it best visited on an overnight trip which is plenty of time. 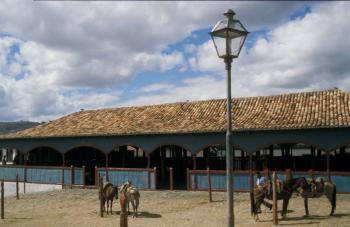 Diamantina is a pleasant enough colonial town, but is not in my opinion in the same class as Ouro Preto or even of a number of other non-inscribed colonial towns in Minas Gerais such as Tiradentes. It hovers between “worth a detour” and “worth a visit” if you have the time and want to clock up another WHS. The trouble is that it is somewhat isolated from the more frequented tourist areas south of Belo which can be passed through on a “natural route” and a “detour” to see it is quite long. If you decide to go there you will probably have to accept doing a return journey on public transport which could involve a couple of days. We avoided this by renting a car from Belo having bussed in overnight from Brasilia (if you do this go out to the closer and less busy Pamphula airport and “play the field” for a good deal with the range of rent-a-car companies there. While you are there visit the nearby Tentative List entry of “Ensemble architectonique de tourisme et loisir au bord du lac de Pampulha”) and were able to get up to Diamantina that morning AND back to Ouro Preto for that evening. A bus from Belo will take up to 6 hours each way (there are apparently ways of avoiding a return journey on public transport by changing at Curvelo near the Belo - Brasilia highway).

Diamantina’s relative isolation means that it is considerably less touristy than Ouro Preto etc. We however found it quite bustling with traffic (if anything more so than Ouro Preto). There is the usual selection of Baroque churches, colonial mansions and cobbled streets. The market square and its wooden building dating back to 1838 (photo) is perhaps its most unusual and “atmospheric” sight with the horses (belonging to the stallholders?) “parked” outside (though I had to work hard to avoid getting any cars in the picture!). It is said (though I have never seen “first hand” evidence) that this building with its archways was used by Niemeyer as inspiration for the Palacio da Alvorada in Brasilia (He was in Diamantina for the design of the Hotel da Tijuco). As you approach by road you get a feeling for the wildness of the countryside around Diamantina and, with more time, it might repay exploration – but we didn’t. 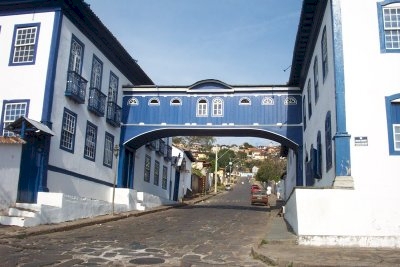 Diamantina really is very different from Ouro Preto for example, and not just another mining town. It's smaller (the historical remains can only be seen in the center of the current city) and soberer. I found that it has some basic beauty.

There were quite a number of Brazilian daytrippers around, but I didn't see any foreign tourists. Maybe that's because it takes 5 hours to get here by bus from Belo Horizonte, not the center of the world itself. It's quite a lively town, with music played in the streets and a number of good restaurants. And (of course) the Diamond Museum. Here you can see some real diamonds (there's a very strong man with a gun guarding them, and selling the entrance tickets). Also, there are paintings that depict how the slaves had to do the digging, and how their masters lived.

In the town center there are a number of good sights. I liked the pure and simple Igreja do Rosario. And also the small houses along the street from there to another church, do Carmo. Not to be missed too is the very blue passageway at the Casa da Gloria.

Historic Centre of the Town of Diamantina

Gold production
Slavery: Its mines were worked by slaves. It was also the home of one of Brazil's most "famous" slaves who has become a soap opera figure "Chica da Silva"

Built in the 18th century: "The town of Diamantina .... developed in the 18th century.......the discovery in 1720 of an unsuspected source of wealth, diamonds.....(When) the Portuguese Crown discovered the existence of this source of wealth in 1731, it set up a new body to administer the region, the DemarcaÃ§Ã£o Diamantina.... Two sets of 18th century plans show a layout of winding and uneven streets which have changed little since that time." (AB)