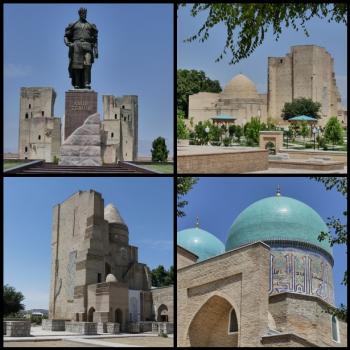 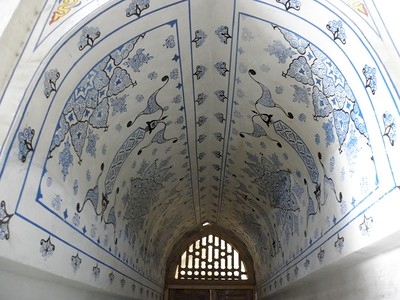 Shakhrisyabz originally was not included in my group tour of Uzbekistan, but of course, I found my way there. I hired a taxi that took me to Timur's birth city in about 2 hours. It's a fine drive along with papaver fields and across a mountain pass. Locals sell the ubiquitous Uzbek bread and rhubarb by the roadside. The city itself is worthwhile not only for "completing" Uzbekistan's 4 WHS and the main Timur sites, but it also presents them at a much more human scale than Soviet-style Samarkand.

Shakhrisyabz is quite small and the monuments are scattered along its main street. I started at the Aq Saray palace, the most iconic place in town. Behind a grand statue of Timur lie the remains of his former summer palace. Its two towers, the only large structures left, are enormous. Their blue glazed tiling looks weathered, but that also adds to the original/non-restored feel of the site. In front of it, some floor mosaics have been uncovered.

The main road then culminates into the complex of the Kok-Gumbaz mosque and Dorut Tilyovat. The interior walls here are not covered by mosaics but by frescoes. They are in quite a bad state, the paint is peeling and parts of it look like reproduction wallpaper. The motifs have a different colour scheme from what I had seen at Samarkand: here it is mainly blue on white. They are said to be inspired by Chinese porcelain.

Behind it is another large and half-restored complex: the tomb of Jehangir. It is remarkable to see that these 14/15th-century buildings are much taller than the rest of the (new) town. In comparison, they look like skyscrapers - a remembrance of the splendour Timur gave to Shakhrisyabz and the decay that followed. 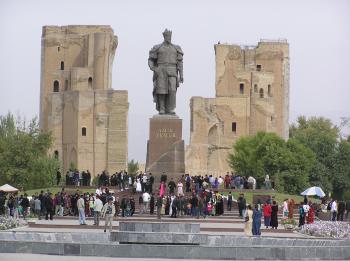 Silk Roads: (Near) Classic Land Route; in ICOMOS thematic study but no details on role or function