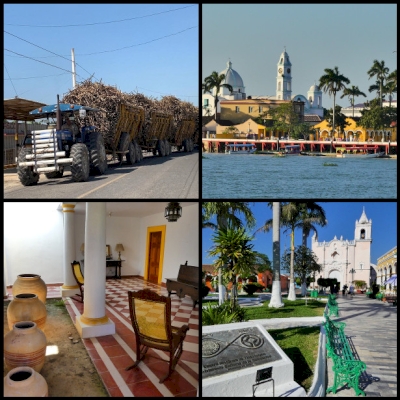 I visited this WHS in December 2021. After a long drive from Tehuacan via a very high altitude winding highway/mountain pass near Mexico's highest mountain Citlaltepetl or Pico de Orizaba at 5,636 metres, we arrived at sea level on the Caribbean coast of Mexico. You'll notice you're getting close to the river town of Tlacotalpan either by the vast flat fields with feather-like sugar cane crops or by the quite dangerous long sugar cane "tractor trains" on the road.

The area around Tlacotalpan suffers quite a lot from severe weather conditions: it can get very foggy towards sunrise/sunset, and heavy rain and very strong winds happen all year round not only during hurricane season. This can be noted also by the simple water management system with deep water channels running parallel to most of the pavements. We were lucky to visit on a sunny week towards Christmas so the atmosphere was a bit livelier than usual, and only had to be extra careful due to the fog on our early morning departure. When we visited the bigger church with a bell tower (churches here are painted in different colours every other year judging by some photos I've seen over the internet), I found the bell tower door open so I sneaked upstairs through the tiny narrow doorway for a better overview of the main square, before thanking the organist on duty who had forgotten to close the door behind him. There's a UNESCO WHS plaque in the main square just next to the central kiosk and another one near the Tlacotalpan letters, closer to the river.

From here, we spotted the new El Cuenqueño boat service offering a more luxurious boat trip (including food and beverages on board) over the Papaloapan river. Tickets can be bought directly opposite the pier from their offices and the whole service was really excellent. The main advantage over the smaller canoes or boats is the wonderful view of Tlacotalpan from the upper deck, even though comparing it to Mexico's Venice is a bit over the top. On the whole though we had a great time walking along the colourful roads and people watching on Xmas day. It was possible to peek through the open windows and/or doors to see the lovely patios and furniture inside. Overall, there were less cars here than in Campeche and no ridiculously high pavements so it's easier to appreciate the whole river town atmosphere here, while Campeche's OUV lies more in its fortifications. 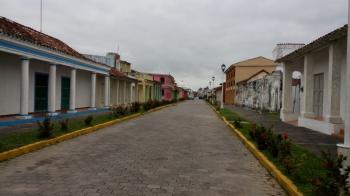 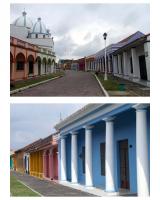 Urban fabric: Tlacotalpan is a Spanish colonial river port on the Gulf coast of Mexico which has preserved its original urban fabric to an exceptional degree (OUV)
Neoclassical architecture: The other church along the plaza is the San Cristóbal Parish, which dates from 1849. It is Neoclassical with some Moorish influence (wiki)

Gulf of Mexico: Some 10km inland, along the Papaloapan River

Aztec Empire: "..the names of the river Papaloapan (Butterfly River) and other settlements nearby are Nahuatl, which suggests that it was under Aztec domination" (AB ev) "In 1461, Moctezuma Ilhuicamina began the Aztec's first efforts to expand here, then controlled by the Cotaxtlan dominion. In 1475, Axayacatl conquered it along with Coixtlahuaca, Tochtepec and Cosamaloapan, giving all these areas their current names." (wiki)
Fusion: represent a fusion of Spanish and Caribbean traditions (OUV)