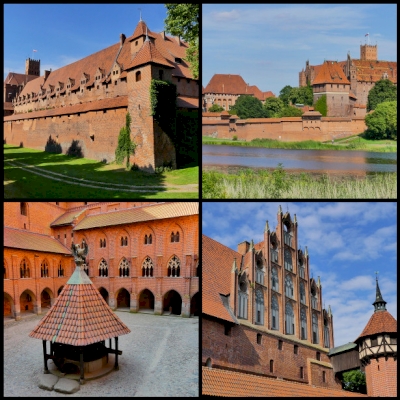 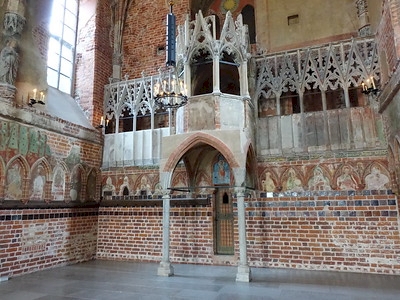 Malbork Castle was the headquarters of the Teutonic Order's crusader state. The castle had both a religious and a political function: here lived the Grand Master and the daily management of the Order, and about 3,000 knights. The castle was built at the end of the 13th century and was expanded ever further. It is entirely made of brick, and according to unconfirmed sources, this is the largest area of any castle and/or the largest brick building in the world. I went to see it on a half-day trip from Gdansk.

My visit was on a sunny Saturday morning, and because I was expecting crowds I had purchased an entrance ticket online beforehand (I did so as well with all train tickets on this trip). I arrived at the Malbork train station at 8.45 a.m., and from there I had a 15-minute walk to be at the gates at the opening hour of 9 a.m. Local authorities have not bothered to sign the way to the castle, but it lies on the right side from the station and then straight ahead until you see the red towers on the horizon. From the train, you’ll already have a tantalizing view of it.

At the entrance, I picked up my pre-booked audio tour and headphones, and went ‘in’. If you want to save money or are in a hurry, you can also choose to view only the exterior: access to the complex within the walls is free, and there is plenty to see there. It consists of 3 separate parts: the High Castle, the Middle Castle and the Fore Castle. They are surrounded by canals and different rows of defensive walls.

The audio tour will guide you through the entire complex. It’s a ‘smart’ device, it acknowledges where you stand and then tells you what to see and how to continue. There is a story in every room - at a given moment it seems like there is no end to it. After the guide led me to the courtyard for the third time after 1.5 hours and stated 'now we are halfway', I decided to quicken the pace from then on. I skipped some rooms and exhibitions (the amber museum has some fine pieces, but I can do without a large collection of weapons) to keep my visit at about 2.5 hours.

One of the most beautiful spaces within the castle grounds is St. Mary's Church. It is entered via the Golden Gate - a door framed with colourful figures with a golden glow. This church has been badly damaged during the end of the Second World War, but in recent years they have continued to restore it to its original state and in 2016 it reopened. 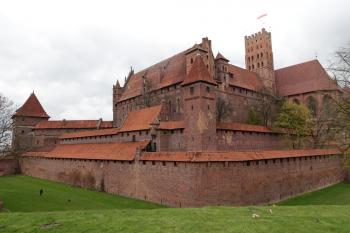 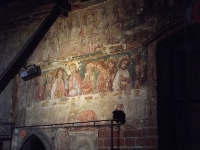 Teutonic Knights: One of a series of fortifications known as "Ordensburgen". These were originally constructed by the TK and the Livonian Brothers of the Sword (who merged into the Teutonic Knights in 1237) to fortify territory in Prussia and Livonia against the pagan aboriginals.
The Crusades: Criterion (iii): .... "The Castle is at the same time the major material manifestation of the Crusades in eastern Europe, the forced baptism of the Baltic peoples, and the colonization of their tribal territories"
Located in a Former Capital: Located in Malbork, formerly Marienburg, the capital of the State of the Teutonic Order (1308–1454)

Built or owned by Germans: Built by members of the Teutonic Order, a German Roman Catholic religious order.
Sound and Light Show: In summer season, see link
On Banknotes: 1 June 1995 - Current 100 zł Polish note, Malbork Castle is on the left of the reverse side
Depicted in Miezilinska Maps