The Archaeological Area of Agrigento comprises the remains of a great Ancient Greek city in the Mediterranean.

Agrigento or Akragas was founded in the 6th century BC by Greek settlers originating from Rhodes and Crete. They left unstable Greece, which suffered from civil war, famine, and social unrest. Groups of settlers spread out over the Mediterranean, with the purpose to build their own and better Greece abroad. These colonies acted politically independent from the motherland and each other.

The city of Akragas flourished especially in the 5th century BC. Most of the remaining temples were built in this period. Its position was lost in 406 when the Carthaginians all but destroyed it. It was rebuilt, but suffered defeat again in 210 when Akragas was besieged by the Romans. 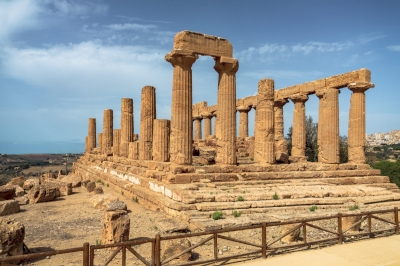 I visited the archaeological area of Agrigento, officially known as “Valley of the Temples”, in September of 2021. This is, in essence, a collection of stand-alone highlights, of which the main one - Temple of Concordia - is a good reason to visit all by itself, being clearly among the best-preserved Doric temples anywhere.

The second-best preserved temple, Juno, still has around 30 columns standing, and in the usual context of antiquity should be considered as amazingly well-surviving. Nonetheless, here you are well into the archaeological realm of having to imagine what the place might have looked like in its heyday rather than actually seeing it.

Another major sight, Temple of Hercules, is a picturesque file of several columns among huge rocks. Other temples – Zeus, Hefestos, Castor and Pollux – remain mostly as a memory; a single portal among the piles of stones. Also within the confines of the area, there is a villa with gardens that once belonged to a British nobleman and archaeologist and then assorted burial sites here or there - all of limited interest to a non-archaeologist but not without occasional visual quality.

Valley of the Temples is quite large, with a non-trivial amount of walking required between the aforementioned main points of interest. We covered about two-thirds of it on our visit, the distance of about a mile between the Temple of Juno and the Temple of Zeus. The main parking lots happen to be in the vicinity of those two temples, which means that most visitors will cover this segment there and back. Entirely on foot and without rushing, it can be done in about two hours. There is a shuttle running between the temples of Hercules and Juno that at €3 one-way may be a good option for those looking to reduce their walking exertions. 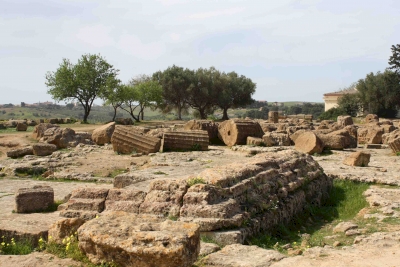 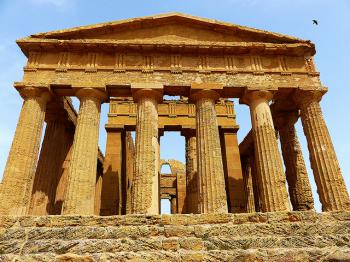 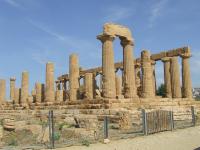 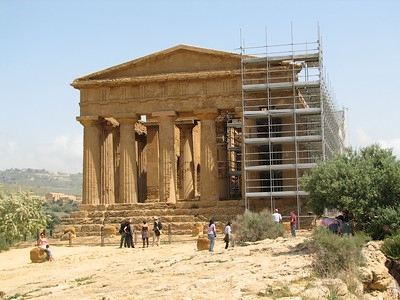 Driving in Sicily for sure is different on a working day: it took me 3 hours to get from Noto to Agrigento, about 150 km. First, there were the hills around Ragusa, which steepness proved too much for the loaded trucks. And then came the rather hellish outskirts of Gela (an even earlier Greek settlement than Agrigento, how times have changed!), where every car just seemed to want to park on the other side of the street and where your eyes are blinded by a forest of screaming billboards. All this made me arrive in Agrigento around 11.30, not the best of times because of the sun and the scores of tour buses.

I started my sightseeing at the top, at the archeological museum. The museum is pleasant enough but specializes in vases a bit too much to my taste. The large Atlas statue however is definitely worth a look.

The ruins are situated downhill and split into two parts by a busy road. The best-preserved temple is the Temple of Concord, partly under scaffolding nowadays. The rest of the large grounds are scattered with stones, some forming sacrificial altars large enough to slaughter 100 oxen at one time. 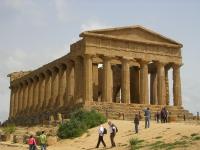 Italian government plans to build a huge liquid gas terminal less than a mile away from the famous Agrigento site (2008.11.21)

Unfinished constructions: Temple of Olympian Zeus, "The roof was probably never completed, though the pediments had a full complement of marble sculptures"