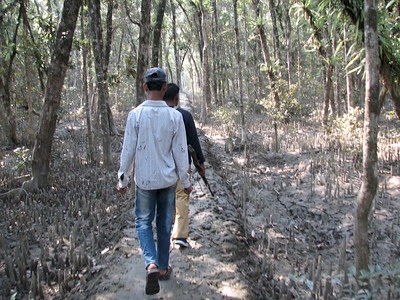 The Sundarbans are the closest thing to a tourist attraction Bangladesh has. I took a one-day boat trip to the newly established visitor center at Harbaria. You'll have to spend several days to get really deep into this large park, but to me this trip was fine.

We first sailed (on a small motorboat) along the coastline, thickly covered with forests. We saw a number of kingfishers, some dolphins, and a crocodile on our way. We would have liked to see a Bengal tiger of course, but they are rare. My guide and the boatmen had seen one here in November 2006, not far from Mongla town.

After 4 hours we arrived in Harbaria, where we did get ashore. We were assigned with a man with a gun. Together we walked the trail that has been laid out here that lets one get the feeling of being in the 'real jungle'. Having a man walking in front of you with a gun really helps to get a spooky atmosphere (maybe the tiger is looking at us from behind the trees). If it's really that dangerous, it would help to have a man with a gun walking behind us too. The highlight was the tiger footprints, left in the mud sometime before. 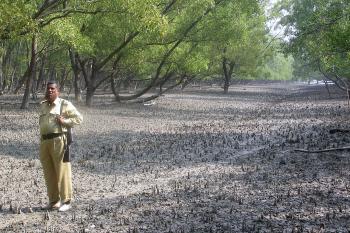 World Heritage Centre and IUCN call for relocation of Rampal power plant, a serious threat to the Sundarbans (2016.10.19)

Shipping dept disagrees with UN over closure of Shela river route in Sundarbans (2016.09.12)

The cyclone that left more than 3,000 people dead in Bangladesh in mid November, also devastated the Sundarbans World Heritage Site, according to UNESCO experts who visited the mangrove forest on the delta of the Ganges, Brahmaputra and Meghna rivers. (2007.12.16)