The Pre-Hispanic Town of Uxmal is a large ruined city of the Maya civilization.

Maya chronicles say that Uxmal was founded about 500 by Hun Uitzil Chac Tutul Xiu, although the exact date of occupation is unknown. Most of the architecture visible today was built between about 700 and 1100.

Besides the main complex at Uxmal, also the nearby sites of Sayil, Kabah and Labna are part of this serial nomination. 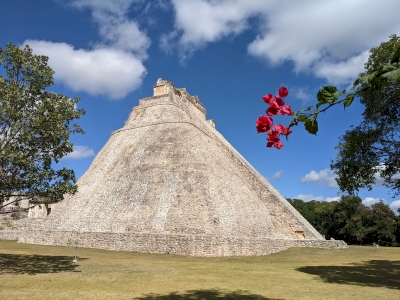 My initial plan was to drive the Ruta Puuc and visit the sites Labna, Xlapak, Sayil, Kabah, Uxmal in 2 days.

Starting my drive from Merida in the morning, I drove to Muna, and then Oxkutzcab. Soon after, on my way to Labna, the road became beautiful. It was narrow with a lot of vegetation, sometimes covering the road, and I was alone on that road. With the right music, in the end of afternoon, with the sun rays playing with the trees, the drive became magical and I enjoyed every second of it (except the sudden potholes).

The enchantment was slightly attenuated when I arrived in Labna only to discover that the site is still closed due to Covid. Coming from Chichen Itza a few days earlier it was a bit strange to me as clearly there would not be as many visitors here! I continued the drive to Xlapak with little hope to see it open. And indeed, all sites on the Ruta Puuc were still closed due to Covid, with the exception of Uxmal.

So I arrived early at my hotel for the night in Santa Elena. The owner confirmed the sites have not re-opened and it’s not clear exactly why. She also told me that Uxmal was not busy. Therefore. The next morning, I didn't feel the need to be the first at the entrance. And indeed, there were very few people compared to other sites. Apparently still due to Covid, the areas we can visit are a bit limited in Uxmal, with some ropes to delimit them. I was impressed by the Cuadrangulo de las Monjas and by the Palacio del Gobernador (even if we can't go in front of it; may be due to some ongoing restoration?). Also the view on the site, near the house of the turtles, is very nice.

Overall, I found the visit interesting, even if shorter than for other sites. 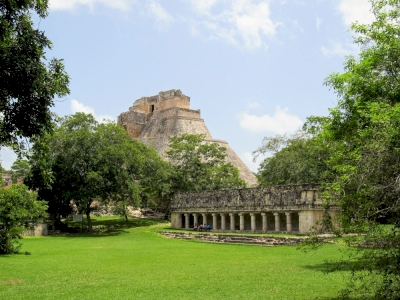 We visited as a day trip from Merida in August 2019. Having come from the southern Mayan sites of Palenque and Calakmul it is hard to believe this is still the same culture because the style and decor are so different. Uxmal is well restored and there was a good photo display in the tiny museum showing before and after pictures of a lot of the site. Very interesting. They continue to work on it, especially around the Governor's Palace, judging by the most recent photos taken in 2012. It's not really as large a site as it looks but we spent a couple hours to see it all. Unfortunately the overpowering stench of guano prevented us from getting too close or inside many of the structures and at 413 pesos foreigner entry fee now (compared to 197 and 111 pesos for Calakmul and Palenque respectively) it is overpriced and feels like a money grab. It is still a very worthy entry on the WHS list nevertheless. Buses weren't frequent enough for us to risk visiting the other sites included in the nomination. 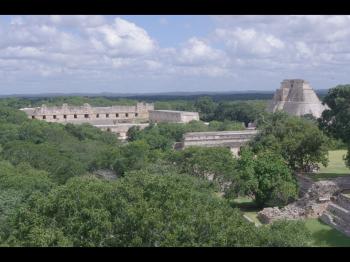 Uxmal became one of my favorite WHS. The number of monuments, their quality and the level of details featuring the Puuc architecture make it great treasure. Although se in the middle of the forest, the site is very easy to access, so are the sites of Kabah, Labna and Sayil, which complement the site. This WHS provides one of the most striking testimony of the Maya civilization. 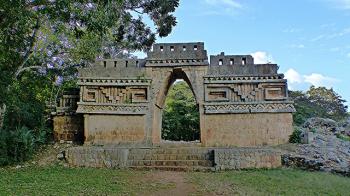 I visited this WHS end December 2015 - beginning January 2016. Contrary to what the name suggests, this WHS is made up of a series of archaeological sites on the Puuc Route and not only of Uxmal. Uxmal is definitely the crown jewel of this WHS. It is the largest and most visited site in this series and it is the one which can easily be appreciated as a fully-fledged Mayan city. The 3 highlights of Uxmal are the Pyramid of the Magician, the Governor's Palace and the Nunnery Quadrangle. The Nunnery Quadrangle is beautifully carved and in a very good condition. I enjoyed the rather touristy sound and light show mainly for highlighting the huge serpent carved on the nunnery's wall. The masks of the rain god, Chaac, reign supreme and are present everywhere. However, these are even more evident and repetitive in the other minor sites in the series. I started by visiting Labna which is the farthest away from Uxmal and close to the Loltun Caverns. The site is very small when compared to Uxmal however its main sacbe and the famous arch (picture) with geometric motifs are definite highlights of what was once an elaborate road network from one city to the next. Close to Labna, I visited Xlapak which is the least impressive of the series and receives almost no mention by Unesco. In all sites, attention to detail is given while restoring these sites and every single stone is numbered to try to fit the pieces back in an enormous and difficult jig-saw puzzle. Xlapak's main highlight is the palace-like structure which is more comparable to the style in Becan and Chicanna. Next I visited, Sayil which is bigger than Labna and has a lot of Chaac carvings. I really enjoyed visiting these sites and being the only visitor for hours on end which was quite a welcome surprise when compared to the more famous Uxmal. Both Labna and Sayil are a bit over-the-top with the repetitive Chaac carvings but the site of Kabah is a total exageration. The Mayans really must have wished for lots of rain to build such a structure. Being closer to Uxmal, I wasn't alone. I would recommend visiting this site in the afternoon to fully appreciate the Chaac masks' detail in the afternoon sun. All in all, I really enjoyed my visits here and would surely recommend visiting at least a couple of minor sites together with Uxmal. 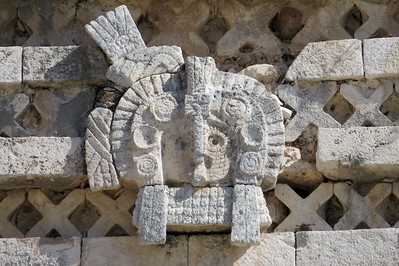 Although its name suggests otherwise, this is a serial nomination comprising the sites of Sayil, Kabah and Labna in addition to Uxmal itself. In the AB evaluation a fifth location is mentioned (Xpalak), but this one has mysteriously disappeared from the final nomination. There’s a WH inscription sign at the entrance of Uxmal which confirms this, as it says “Prehispanic cities of the Puuc: Uxmal, Kabah, Sayil and Labna”.

“Puuc” is the name of the hilly region just below Merida where these sites are located. And it’s the name of the architectural style named after it. I started my visit at Kabah, some 20 km from Uxmal. It’s a nice drive there on a small road that goes up and down and up again. My car was the fourth in the parking lot, which could not hold more than 5 cars or so. It’s a pleasure to be away from the crowds again!

Kabah isn’t a big site, I spent 45 minutes there. It is mostly known for its “Palace of the Masks”, which has a façade decorated with hundreds of stone masks of the long-nosed rain god Chaac. One has to look very closely to see it is Chaac – it looks more like a geometrical motif. This massive repetition of a single set of elements is said to be unique in Mayan architecture. It’s weird for sure, but I did not find it esthetically pleasing.

The site of Uxmal is much bigger but not as huge as Chichen Itza for example. Rain and the Rain God Chaac are a common theme here too: this part of Yucatan is very dry, and there are no cenotes. The locals had to rely on rainwater and built cisterns to save it. And they prayed to Chaac a lot I guess.

Right after the entrance, you stumble upon the perfectly shaped Pyramid of the Magician. This is the gate to the Nunnery Quadrangle, an enclosed area with a central plaza and buildings covering all four sides. To me, this is the best part of the site. It has long, palace-like buildings, richly decorated with stone mosaics and more depictions of rain gods. It did remind me in a way of the modern structures at the UNAM.

Explanations by way of information panels are much better here than at most archaeological sites in Mexico. I spent about 1.5 hours at Uxmal, looking for example at the ball court and a pretty vaulted arch that is its entrance gate. There are a lot of other bulky structures at the site, but just as in Kabah they didn't really work for me.

Uxmal is near Merida on the Yucatan peninsula. Uxmal is less frequently visited than nearby Chichen Itza. This ruin is indicative of the Puuc style of architecture and was built around 300-950 AD. The pyramid of the magician is crisply restored as are many other buildings but others are still in complete ruin. The Palace of the Governors is built on the highest point in the area and has some unusual carving. Look for the grotesque carved masks and chak carvings. Also, don't miss the separate site of Kabah nearby. The arch has some original hand prints on it. Some comfortable hacienda style hotels are nearby. I don't think you can get here on a public bus but you can book a tour from Merida and maybe even from Cancun. The place was deserted when I visited in 2003.

Pyramids
Cisterns: At Uxmal and Kabah

Mayan culture: "demonstrate the social and economic structure of late Maya society before it disappeared in the Terminal Classic Period" (OUV crit iii)
Mislabeled archaeological sites: The Nunnery (a nickname given to it by the Spanish; it was a government palace - wiki)

Astronomy and Astrology: The so-called Governor's Palace is anomalously oriented regarding other buildings at the site. Its entrance faces ESE-wards towards the most southerly rising point of the planet Venus around the date of its construction (early 10th century); the opposite direction is towards Venus' most northerly setting point. The façade of the building contains iconographic representations of the Venus cycle and of the Mayan zodiac. (...) the iconography places the connections between this building and Venus beyond doubt and the importance of Venus cycles in the Mesoamerican calendar is well attested in ethnohistory. (Chankillo Nomination Text, p. 123-124)
International Exhibitions: In 1930 Frans Blom led a Tulane University expedition to the site. They made plaster casts of the façades of the "Nunnery Quadrangle"; using these casts, a replica of the Quadrangle was constructed and displayed at the 1933 World's Fair in Chicago, Illinois. (wiki)

Built in the 8th century: Although settlement dates back to the Pre-classic Maya period (c800BC) the main development "was in the Late Classic Period (AD 650-1000).. Radiocarbon dating suggest(s)that the main structures in the complex were built between AD 700 and 1000" (AB). Uxmal was abandoned C1200AD.