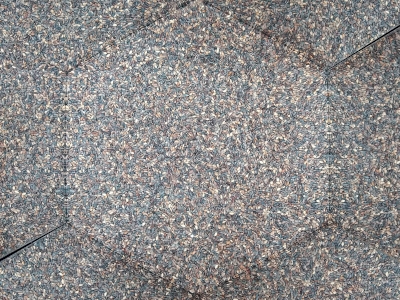 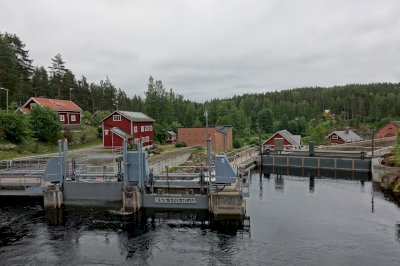 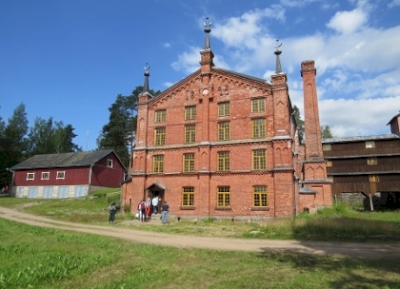 I kicked off my long weekend trip to Finland with a visit to the Verla Mill. I had stayed overnight near Heinola, already en route between Helsinki and Verla. I arrived in Verla around the opening hour at 9.30 am after an uneventful drive and decided to have a look first at the rock paintings at the nearby lake. They apparently show a row of reindeer, but even using the largest zoom on my camera I couldn't make the scene out.

The old Verla settlement has a similar setting to the Engelsberg Ironworks in Sweden. A handful of wooden red buildings were scattered around. Nothing too special at first sight. Fortunately this time I could join a tour of the interior, something that should not be missed as it tells the story well. I had to share my tour with about 30 recent immigrants to Finland, who were learning Finnish and so the tour was conducted in that language only. I was provided with a leaflet in Dutch however that explained the main facts about the locations we visited.

The tour starts with an impressive short film that shows the mill in operation (starring elderly employees, probably the film was shot in the last days of the factory's existence). Verla was a cardboard factory, and the whole elaborate process is shown. The horses, the men, and the women all had their specific tasks. You're not allowed to take pictures inside, but John Booth (see photo beside his review below) has been naughty and caught a glimpse of what it looks like. 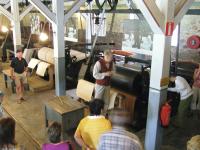 Helsinki Hotspot: 2h by bus or train to Kouvola, from there there are infrequent buses (or take a taxi). Better by private transport (158km)