Crespi d'Adda is a late 19th-century model worker's village. It is one of the best-preserved examples of the phenomenon of "company towns", which were developed by enlightened industrialists in Europe and North America.

The aim was to house factory workers close to their work and the raw materials. The urban layout of Crespi d'Adda and its architectural appearance is still unchanged.

The town was founded in 1878 by the textile manufacturer Crlstoforo Benigno Crespi, who build a number of houses for his workers around a mill. His son turned this into a village based on an ideological model. Besides single-family houses, with their own gardens, he constructed common services like a school, a theatre and a hospital. 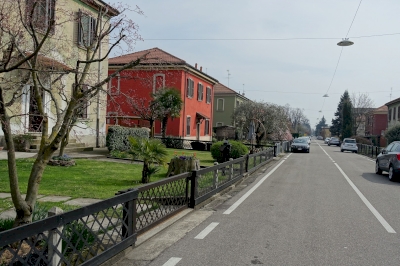 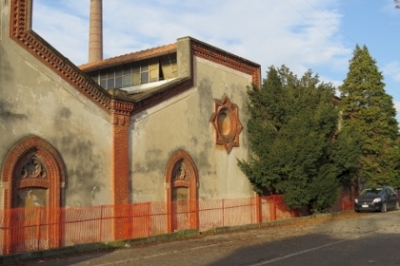 Reading the previous reviews, I was expecting a desolate WHS in decay. When I arrived however on a sunny Sunday morning, the town looked bright and I certainly wasn’t the only visitor. Local people streamed out of the church, a service had just ended. A group of photographers was trying creative shots of the tree-lined streets and the industrial buildings. And numerous people were using the streets (that are low on traffic) for jogging or cycling. I parked my car in the town center and went out to explore too.

The main attraction is the former factory. It’s an iconic sight (see larger picture above), architecturally interesting. Unfortunately, the building is closed, and no effort has been made to turn it into something informative about its past. I wonder what the new owners of Percassi will do about it – they seem to want to house their business headquarters in the factory buildings, but will that mean these buildings stay closed for tourists?

In all, I wandered around Crespi d´Adda´s streets for about an hour. The church and school are worth a look, and I even walked uphill to try and get better views of the factory owner´s palace. The design of the town was inspired by English examples, and certainly, Saltaire springs to mind. The rigid street plan and the cubical houses are similar. This Italian version however has more flair. The houses aren´t so close together, are painted in different colours and all have good gardens. The church is a pretty thing, and most of the other communal buildings seem to have been designed by a creative architect. A final interesting feature is the outdoor laundry place in the town center, which was made to save the inhabitants the walk to the river for washing clothes. 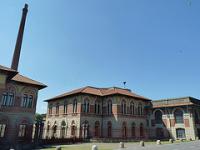 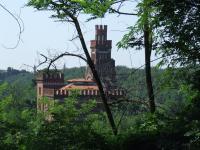 Modelled after: Modelled after Saltaire "Crespi D?Adda in Italy .. consciously uses Saltaire as a model even down to the derivation of its name. Founded in 1875 by Cristoforo Crespi, as with Saltaire, it combines its founder?s name with the river on which it sits. It too displays an architectural unity - the numerous community buildings were built to a common Italian Gothic motif between 1893 and 1925." (Nom File for Saltaire)
In private ownership: Bought by the company of Antonio Percassi in October 2013