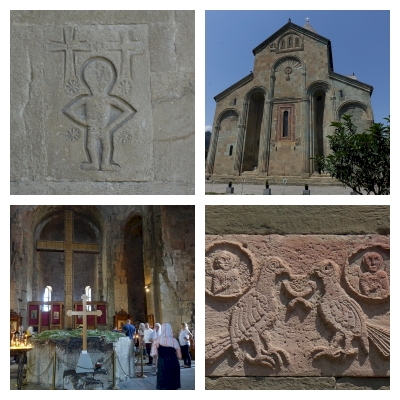 Mtskheta is an easy half-day trip from the capital Tbilisi by marshrutka. Once you have arrived within the town limits of Mtskheta, you have to pay attention to where to exit the bus - the trick is to stay on until you are right in front of the big cathedral, ignoring all the loops it does first around town and across the river. I spent about 3 hours in Mtskheta, including a ride back and forth by taxi to the Jvari monastery on a hill outside the city.

The Svetitstkhoveli cathedral towers high above everything in the city. One enters through a large gate, with two bull heads on both sides: these are pagan fertility symbols. The courtyard is spacious, with a neat lawn that is forbidden to walk on. The outer walls of the cathedral display some interesting reliefs, made out of red stone that stands out against the grey of the rest. In general, though, I found the reliëfs here in Georgia to be quite simple. It may be a result of local taste or a sign of lack of wealth that decoration is so limited.

Jvari monastery balances very nicely on a cliff far above the city. As with all attractions where I have been during my first two days in Georgia, it is very busy here and the parking lot is full of vans and taxis. This monastery dates back to the 6th century, making it the oldest of the three monuments of Mtskheta. It has 4 apses (semicircular niches) which makes it a tetraconch. It is the prototype of many Georgian churches. Inside there is one open space, with a large wooden cross in the middle. 'Jvari' means Monastery of the Cross: already in the 4th century, a large wooden cross was placed on top of the hill as a symbol of the victory of Christianity on the pagans. It is precisely on that spot that this church was built.

Modelled after: A small copy of the Church of the Holy Sepulchre was built in the grounds of Svetiskhoveli Cathedral between the end of the 13th and the beginning the 14th centuries to mark it as the second most sacred place in the world (after the church of Jerusalem), thanks to Christ?s robe.