The Ancient Building Complex in the Wudang Mountains is renowned for its many Taoist monasteries and secular buildings which have had a profound influence on Chinese art and architecture.

The Wudang Mountains are a small mountain range in Hubei province. The site includes palaces, monasteries, nunneries and temples. Most date from the 14th to 16th centuries. It is an important destination for Taoist pilgrimages. 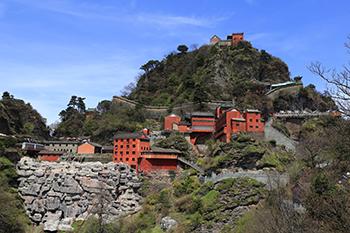 I travelled to the city of Wudangshan from Xi'an by train which took eight hours. It would also be possible to take a bus from Xi’an to the city of Shiyan from where you must take a connecting local bus to Wudangshan. From Wudangshan railway station it is seven kilometres to the centre of the city where majority of the hotels are located. I stayed overnight in youth hostel and started my visit to the mountains early in the morning. I spent the whole day wandering around the mountains by foot, bus and cable car.

Like mentioned in the earlier review, visiting Wudang Mountains is expensive. You can spend 50 euros just for tickets. General ticket is 240 RMB. That includes entry to the majority of the temples, a leaflet with the map and limitless use of shuttle buses that circulate regularly around the mountains. If you want to go to the Tianzhu Peak by cable car it is 90 RMB one way and a little less than double price for round trip. The top of the mountain and The Purple Heaven Palace cost each extra 17 RMB.

My route went upward via eastern way and downward via western way. At first I went by bus to Prince Slope or Fuzhen Temple where is also a coach transfer station. From there it is possible to take a bus to two directions. After visiting Prince Slope Temple I continued by bus towards the eastern terminus where is also a cable car station to the Tianzhu Peak. Before that I explored nearby Lower, Middle and Upper Taoist Temples. The cable car trip itself is a great experience. I had a whole car for myself and the views were breathtaking. The top of the Tianzhu Peak is in the altitude of 1600 metres. The lower buildings are free to visit with the general ticket but the uppermost part requires own ticket. The peak with the Golden Palace was very crowded and there was some queueing on the steep stairs heading to the peak.

I decided to hike from the peak to the western coach terminus. The distance is not that short but walking downhill is easier so I took a chance. That was a good decision because it was relaxing to walk in nature after the crowded top. Going downward you could see a lot of very exhausted people who are hiking upward. Along the hike I visited some smaller sights like Facing Heaven Palace, Yellow Dragon Cave and Langmei Shrine. Near the coach terminus is the Southern Rock or Nanyan Palace which is one of the most beautiful building complexes of the area. The last place I visited was the Purple Heaven or Zixiao Palace which is one of the best known complexes of the Wudang Mountains.

There are lots of places to visit in the Wundang Mountains. You can easily spend two days wandering around various temples, palaces and other interesting places. So which ones are my recommendations for someone with only a limited time. The Tianzhu Peak with the Golden Palace is naturally a must see. The palace itself is small and quite modest building but what makes it interesting is that it is made entirely by bronze. Just below the peak there are many other temples and residential buildings of priests and monks. Labyrinthine stairs and alleys between the buildings on different levels are fun to explore. My personal favourite of the Wudang Mountains is the building complex of Southern Rock Palace with its skilful and colourful woodwork and panoramic viewing platforms. It is also a little bit less crowded than the Tianzhu Peak and Purple Heaven Palace. You can see it on the hiking trail from long way away because it is located on the edge of the cliff. I also found Purple Heaven Palace and Prince Slope Temple worth visiting. Additionally, I recommend to walk at least some stretch of the ancient mountain climbing path because it is the best way to feel the atmosphere and nature.

Wudangshan is an amazing place. I know it is a sacred site for Taoism. The only thing that concerns was the fact that some of the priests ask money before they allow the worshippers to pray. Watching the sunrise at the mountaintop is the best experience of all.

Having spent several months on site, I was amazed by the site itself, but sincerely dissappointed with administartion. Forced relocations, haphazard local implementation of UNESCO policy, pervasive corruption, commodification of culture, locals barred from access due to exorbitantly high ticket fees. Human rights is certianly not a priority as anyone who gives voice to these concerns is threaten with arrest or worse. I do hope for change.

Yuzhen Palace will be raised 15 metres above ground to prevent its inundation (2012.08.15)

Cultural sites damaged by fire since inscription: Yuzhengong Palace - Jan 2003
'Threatened' by Dams: Located on the edge of the Danjiangkou reservoir in the Wudang Mountains in Hubei province, the Yuzhen Palace would be submerged once the dam's height is increased

Built in the 14th century: There are a few structures from the Tang dynasty, however, the site as a organized complex developed in the Ming dynasty. "Situated in the scenic valleys and on the slopes of the Wudang mountains in Hubei Province, the site, which was built as an organized complex during the Ming dynasty (14th-17th centuries), contains Taoist buildings from as early as the 7th century." - Nomination File

Location for a classic movie: The Assassin (2015, released on DVD without cinematic release)