By the end of the 17th century, the Qing emperors began to look around for a cooler retreat than Beijing. In Chengde they created a summer residence, exploiting mountains, woods and other existing natural features to which they added contrived landscapes to make settings for innumerable pavillions, palaces and temples.

Outside the palace walls, to the north and west, a total of 11 temples were built. Many of them were built in Tibetan style. Divided into eight groups, they became known as the Eight Outer Temples. The main gates of these buildings pointed towards the palace, symbolising the unity of China's various ethnic groups under the central rule of the Qing emperors. 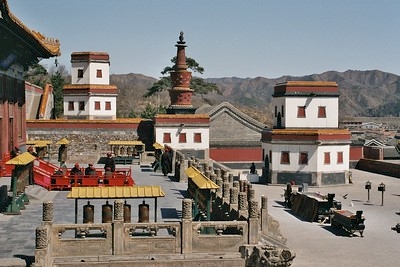 I spent two full days in this city, four hours north of Beijing by bus. Chengde itself is a nice enough encounter with Chinese city life outside the capital. No Mcdonald's or Starbucks can be found here. What it does have is steam trains - an internet search in preparation for this trip resulted in many exciting stories by trainspotters.

But I had my own spotting to do: the Chengde Imperial Resort as World Cultural Heritage. On my first day, I explored the huge park. Don't be fooled by the somewhat standard Chinese gates and buildings at the entrance: when you've passed them you enter a lovely landscape park. There are several lakes, a steppe, and a forest. In the best "natural" spots, pavilions and temples were added. For example the tall and elegant Yongyou si Pagoda.

The next day I walked to some of the outlying temples. Most prominent is the Putuozongsheng, modelled after Lhasa's Potala Palace. It's a strange sight to see it here, in northern China, as well as in the neighbouring Xumifushoumiao (a recreation of the Tashilhunpo monastery in Xigaze). Both are well looked after and brightly painted, but lack the atmosphere of an active Buddhist monastery.

Beijing hotspot: Trains from Beijing East Railway Station to Chengde South is just 1h and frequent. From Chengde South Railway, you can take a bus to the scenic area.