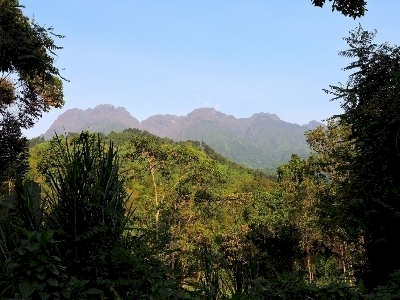 The post made by Els for this Site is informative and comprehensive, but I will add a short review because, though my visit was also rather minimal, I utilized the alternative entry point to the park. Specifically, the gate reached by turning off the main highway at Mubuku. From there a dirt/gravel road gains 700 meters of elevation over 17 kilometers, with a variable quality, but which can be traversed by any type of common vehicle. The route follows the Mubuku River valley, which is surprisingly densely populated with rural villages. That was an issue during the previous month of May, when a severe flash-flood tore down from the mountains of the Park, taking three lives and causing significant property damage, providing another example of the misfortunes of that particular year. 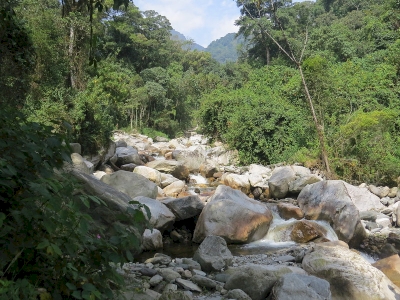 Rwenzori Mountains National Park covers an 80km long mountain ridge in the far west of Uganda. It forms a natural border with the DR of Congo. The park attracts some 2,700 visitors a year, of which at least half are local schoolchildren. The others are mainly trekkers and mountaineers, arriving to hike a 10-day circuit or give the 3rd highest peak in Africa (Margherita’s Peak) a try. WH travellers do not often make it there: so far only 16 claim to have visited it, while no one has written a review yet.

In preparation for my visit, I had been looking for the best access point to get into the park without having to do a multi-day hike. I found out that there are two main entries: one at Nyakalengija (with the Equator Snow Lodge and Ruboni Community Camp) and one near Kilembe. I choose the latter, as the Rwenzori Trekking Services (RTS) advertised one-day treks into the park departing from the associated Trekkers Hostel Kyanjiki. The office of the RTS, whose members accompany the hikes and maintain the trails, is also found on the hostel’s premises. The Nyakalengija trailhead is managed by another company (Rwenzori Mountaineering Services), which gets mixed reviews especially due to its mountaineering safety standards.

So I ended up in Kyanjiki near Kilembe, itself already an extraordinary sight: it is an abandoned mining village, with lots of collapsed buildings and a broken-down cable car system. The endless rows of houses for the miners are now rented out to ordinary people, it looks very shabby and poor. Since last year mining (for copper and cobalt) has resumed however in this area when the Chinese-owned Tibet-Hima Mining Company Limited won the concession.

After a good night’s sleep in the basic Trekkers Hostel, I started my one-day trek at 7.30 a.m. Our goal would be the Musege rock shelter, a post at 2,240m elevation. This is a 9km walk one-way, and you have to return the same route. I was in the pleasant company of three young Chinese (two men and a woman) who work for a Chinese oil company in Kampala. They were visiting the Rwenzori on a weekend trip from the capital. We had two dedicated RTS guides with us.

The hike started out quite strenuous, it’s a 2.2 km long route out of the village and over a ridge before you even enter the national park. Fortunately, it gets much better after that. On the other side of the hill, we walked on paths through farmlands. They mostly grow cassava here. And there are cows and goats. After an hour’s walk, we came upon a stone building: the park office. Here we had to pay the 35 US dollar entrance fee and write down our names in the visitors' log.

After about 3.5 hours we left the forest track to start another steep climb. That brought us to the finish of this hike: the Musenge rock shelter. The shelter is nothing more than that, a roof attached to an overhanging rock. It is sometimes used by park staff. That shelter suddenly also served us well because it started raining.

Neither from the trail nor from Kilembe did I see the Rwenzori’s famed snow-capped mountain peaks. Later I asked a guide in Fort Portal about it, and he said that there is a viewpoint along the main road between Kasese and Fort Portal from where on a clear day you can see them. Otherwise, there's no other option than embark on a multi-day hike through the Rwenzoris.

Uganda climate change: The people under threat from a melting glacier (2021.03.31)