The Rio Abiseo National Park is home to a large number of species of flora and fauna, as well as the location of over 30 pre-Columbian archaeological sites.

Since 1986, the park has not been open to tourism due to the fragile nature of both the natural and archaeological environment.

The Yellow-tailed Woolly Monkey (Oreonax flavicauda), previously thought to be extinct, is known to live in the park and appears to be endemic to the region.

The most famous archaeological site in the Rio Abiseo park is Gran Pajatén, a ruined settlement that has been occupied between 900 and 200 BC, and 200 BC-AD 600. This and other archaeological remains identified in the park are usually attributed to the Chachapoyas culture. 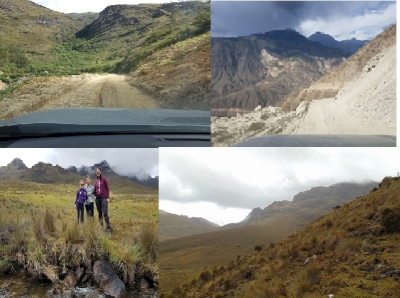 Site visited in June 2022. Rio Abiseo is undoubtedly the most difficult WHS to visit in Peru and one of the most difficult in South America. Traveling to such places is especially exciting, so I couldn't let it go while planning a trip to Peru with my family.

You can get to Rio Abiseo in two ways: from the east, from Tarapoto (which has connections to Lima), where you can visit the lower part of the park with tropical forest, or from the west, where the gate to the park is Pataz and you visit the high-mountain part of the park, with archaeological sites, including the most famous Gran Pajaten. For logistics reasons, I only considered the western route. Besides, I am not sure if the eastern route covers the core zone or only parts of the Abiseo River outside the national park.

Rio Abiseo National Park is officially closed to visitors, but you can find offers for trips there on the Internet, so I suspected it was not that tragic. Long before we left, I got in touch with Nestor (whatsapp +51961844611), a guide who offered the opportunity to visit Gran Pajaten from Pataz. Due to the huge differences in height (over 1000 meters), he recommended using mules and trekking from Pataz for at least two days when traveling with small children. Later, however, our contact broke off, but I know that Nestor can be a good fixer for those who want to visit Rio Abiseo from the west.

Even without official permission, we decided to try it. The road from Huamachuco to Pataz scared me a bit - Google Maps shows 146 km to cover in six and a half hours, so the average is slightly higher than 20 km / h. The reality turned out to be even worse: this road is terrible - in a really bad condition, narrow, with a chasm on one side, often over 3000 m above sea level. (see photos) Especially dangerous when a truck is coming on the other side and you need to find a safe way to pass each other.

Despite renting a SUV, the road took us more than 7 hours. We finally we reached Pataz, destroying the plastic underbody covers on the way. In Pataz, accidentally stood in front of the town hall, went in and asked about the possibility of visiting the national park. I got a contact to a very nice mayor who is also one of the heads of the national park. The mayor said that he would organize permits to the park, a guide and mules especially for us - the total price for one day should be around $ 500 for 4 people. The problem came with the mules because it took all day to get them organized. We didn't want to wait that long, so we thanked him and quit. Plan B had to be implemented.

Plan B was to get into the park without a permit. Near the village of LLacuabamba, 90 km and 4 hours from Pataz, there is a road that turns into the national park. We took it, but there was a watchtower at the border of the park - further entry was impossible without a permit. Luckily there was also a side bouncing road (to a place called Las Tres Lagunas). I drove it, got out of the car out of sight of the rangers, crossed the stream that was the border of the national park, and walked a good kilometer into the park. Unfortunately, I didn't see anything special - nice mountains surrounded by clouds - but the core zone was for sure passed! My wife and children did not want to do this, frightened by a herd of bulls grazing nearby and heading straight for them.

After returning, I persuaded my wife and children to cross the stream and formally "tick" the park (the bulls had already gone several hundred meters away). They did, but on top of that, my wife and son got their shoes wet - a good souvenir from this unique place!

From Llacuabamba we had a long journey to the nearest WHS Chavin - 430 km and 15 hours of driving, which I did in two days. The road was slightly better than the one to Pataz, but still very difficult. In the end, we traveled over 650 km and over 25 hours on dirt roads to check the Rio Abiseo National Park. It was the greatest effort we have made for any particular WHS. Was it worth it? Certainly yes, memories will stay with us forever!

To include cultural heritage criteria (iii) as well

Built in the 4th century BC: "constitute an outstanding example of pre-Hispanic human occupation at high altitudes in the Andean region from as early as the 4th century BC" (ICOMOS); Gran Pajaten is dated from -900-200 BC and 200 BC-AD 600, but the ruins that can be seen today were constructed in the Inca times (1200-1500 AD)

Not open to tourists: "Since 1986, the park has not been open to tourism due to the fragile nature of both the natural and archaeological environment." (wiki)
No road access: Best by boat (or hike)

Derived from more than one TWHS: Pajaten Archaeological Complex and Rio Abiseo National Park
Mixed sites which became so after original inscription: Natural extended to Cultural