Delos is a small island and archaelogical site that is part of the Cyclades island group.

It has been made a WHS because of: 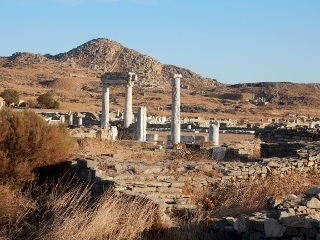 Delos is famous for both mythological and actual historic reasons. It was supposedly the birthplace of Apollo and his sister Artemis, and was thus revered as a sacred site from earliest times. The mighty statue of Apollo was considered to be the most sacred site in Greece (only the base survives today). The island was thus a destination for countless pilgrims, and not only hosted a famous oracle and the Delian Festival, but also the main slave market of the Mediterranean world. During the time of the Delian league and the Athenian hegemony on the seas, it was the location of the league's huge treasury. The island also flourished during the early Roman era, when it was a multinational trading port with about 30,000 inhabitants, while today it is uninhabited except for wardens and archaeologists. Today it is the largest archaeological site in Greece and makes a great excursion from Mykonos, only a 30-minute boat ride away. There are several crossings from the Old Port in Mykonos every day. Don't miss the museum - it's included in the ticket price and holds the original lion statues and the original tiger mosaic. I bought my boat ticket a few hours before at the ticket booth, but it was mid-September, and maybe not that crowded anymore. In summer, advance booking may be a good idea. Be aware, though, that there is no shade on the island (except in the museum), and going for the midday tour is probably not a good idea. Adding a guide to your booking is also recommended, otherwise it would be hard to make sense of all the archaeological remains. 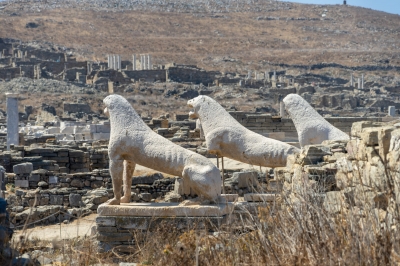 Delos archaeological site is vast and is among the most impressive of its kind. Ancient ruins everywhere require a non-trivial application of imagination to see beyond the piles of stones and the occasional surviving pillar, but Delos offers more than a few structures and artifacts that help visualize a bustling settlement from two and half thousand of years ago. The island was a major cult center for most of the first millennium BC, as well as an important trading post in the later centuries of that period. It was largely abandoned and uninhabited for the following two millennia, which contributed to the exceptional richness of its archaeological remains.

The aforementioned piles of stones and occasional surviving columns prevail at this site as in many others, but walking through the site, you come across occasional buildings that more or less retain their entire structures, or at least retain key features, such as doors or windows. In a few houses, despite exposure to the elements, rich details such as mosaic floors survived in a fairly good shape. The amphitheater at Delos, conversely, is among the least preserved areas of the site – its aerial photos found on the web look more impressive than the ground-level perspective.

Among the most amazing surviving artifacts are the Naxian marble Lions, dedicated to Apollo around 600 BC. In addition to them, a fair-sized collection of various items can be seen in the onsite museum.

Over a hundred points through the site are marked as individual buildings or places of importance, many accompanied by descriptive stands with information in 3 languages (Greek, French, English).

We had three hours for exploring the Delos archaeological site as part of a day-cruise itinerary. That is sufficient time for any layman visitor to discover all of the major points of interest and peruse the museum. A true enthusiast may not be satisfied even with a full day here. Naxos, Paros, and Mykonos all offer daily options to visit Delos in the summer season. 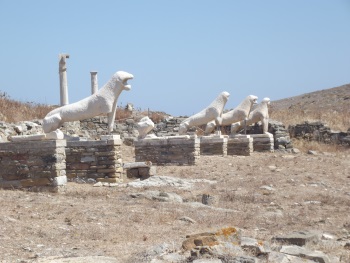 Delos Island is accessible by daily ferries from Mykonos. The WHS takes up half of the area of the island, so to see it all means a lot of walking. In the middle of the island is a museum containing statues and artifacts found on the island, one of the bvest in Greece.

In antiquity Delos was a consular city, where governments around the Mediterranean, and as far away as Syria, sent representatives to resolve disputes, arrange trade etc.

The residents obviously enjoyed a high degree of comfort, judging from the size of their houses, the amenities and entertainment available.

British sculptor has, controversially, been commissioned to create works for the island of Delos, a sacred classical site (05.05.19)

Monumental Fountains: "The Minoan Fountain, referred to in the inscriptions and identified by a relief bearing a dedication to "Minoan Nymphs", is a public well hewn in the rock. It was covered by a square building, open on the south side, which was flanked by a Doric portico. The water level could be reached by the stone steps on the south side. The fountain was constructed in the second half of the 6th century B.C. and remained in use for a very long time, until the late Hellenistic period, when it was finally converted into a house. "
Gates depicting Lions: The Terrace of the Lions dedicated to Apollo by the people of Naxos shortly before 600 BC, had originally nine to twelve squatting, snarling marble guardian lions along the Sacred Way; one is inserted over the main gate to the Venetian Arsenal. (wiki)
Sphinx: Greek sphinx, found at the surrounding archeological site, in the Delos Museum.
Bouleuterion: "Within the Sanctuary are also the administrative buildings of the city: the Bouleuterion (29), the Prytaneion (30) and the Ekklesiasterion (38) buildings used for the assemblies of the deputies, the dignitaries and the citizens." (official website)
Mosaic art: "The House with the Dolphins (92) and the House with the Masks (93) are luxurious private houses with excellent mosaic floors." (official website)
Theatres: "The marble theatre is a rebuilding of an older one, undertaken shortly after 300 BC." (wiki)
Cisterns: Several, including "the Xenon (94), an hotel with an enormous cistern and the Theater (95) with the impressive cistern (97)" (official website)

Locations for playing sport: Hippodrome and stadium for the Delian Games
Erotic art: Columns with Phallus at the Stoivadeion: “The Stoibadeion contains a rectangular platform containing a statue of Dionysus, which was flanked by two actors impersonating Papposilenoi. These actors are now in the Delos Museum for protection. Two pillars, one on each side of the platform, each support a huge phallus, the symbol of Dionysos.” (wiki)
Sea Ports: "an extremely important cosmopolitan Mediterranean port that began to prosper since 314 BC, reaching outstanding levels during the 2nd and 1st centuries BC." (OUV)
Slavery: "Roman traders came to purchase tens of thousands of slaves captured by the Cilician pirates or captured in the wars following the disintegration of the Seleucid Empire. It became the center of the slave trade, with the largest slave market in the larger region being maintained here." (wiki)

Jewish religion and culture: Oldest synagogue in the diaspora (disputed; at least "an assembly hall for Jews")
Goddesses: Birthplace of Artemis, Greeks godess "of the hunt, the wilderness, wild animals, nature, vegetation, childbirth, care of children, and chastity." (wiki) The remains of a sanctuary to her remain at the island.

Digitized by Iconem: In 2016, Iconem scanned with drones all the archaeological structures on the island and make a 3D reconstruction of the entire area.

Built in the 7th century BC: The island contains archaeological remains dating back to 3rd millennium BC. By the time of the Odyssey (c8C BC) it was already 'famed' as the birthplace of Apollo (in 425BC the Athenians decreed that, as such, no-one should be born or die there). Its decline began in 1st C BC and was completed by Rome's preference for Rhodes as a trading centre. Its remains cover a wide period of history - e.g Terrace of the Lions (c600 BC), Stoivadeion (c300 BC), Agora of the Competaliasts (2C BC). The 'chosen' century is based on the statement for Criterion III - "From the 7th century B.C. to the pillage by Athenodoros, the island of Delos was one of the principal Panhellenic sanctuaries"

Cultural sites taking up an entire island
Shortest WHS names: 5 letters
In the British museum: Foot from the "Colossos of the Naxians". The statue of Apollo is thought to have been c9m high and dated from 6C BC. The statue was destined to be cut up and now only 2 portions remain on site (albeit having been moved) Most of it is lost. The BM acquired its section in 1819. See
In Video Games: Assassin's Creed Odyssey

On T List for a different nomination: Ancient Greek Theatres (16/01/2014) - possibly a double entry
No Buffer Zone: "There is no buffer zone, but there is a need for one" (Periodic Reporting 2014)