Kairouan was founded in ca. 670 as a post in the Arab conquest of the west. Its heyday came with the Aghlabid dynasty that ruled between 800 and 909. The Aghlabids built the great mosque and established in it a university that was a centre of education both in Islamic thought and in the secular sciences. Other notable monuments of that period include the Mosque of the Three Doors and the Basin of the Aghlabids. 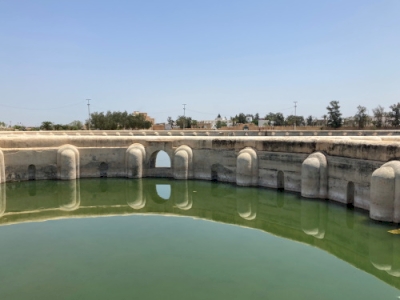 I visited Kairouan on a half-day trip from Sousse by louage, the typical Tunisian minibus share taxi. The 60km distance is easily covered within an hour and a ticket costs only 5 Tunisian dinars (1.70 EUR). It was a scorching day, but still I managed to see all of Kairouan’s significant sights on foot – I walked the streets for 10km in total. With about 140,000 inhabitants, it is a fairly large city, located in a semi-arid region. Fortunately, there are many mini-markets where you can stop for a cool drink.

I started at the Aghlabid Basins, 1 of the 3 locations that make up this WHS. This is already quite a trek from the louage station. The Basins, large water reservoirs from the 9th century, were built outside the city walls and are fed by an aqueduct. I entered from the side, where the gate was open; the official entrance wasn’t and there were no tickets checked or sold. Local boys were using the reservoirs for swimming, although with plastic garbage floating in them this didn't look inviting. Still, I found the monumentality of the reservoirs quite impressive – the largest is 128m in diameter. Later I heard from the guide in Dougga that more basins have been found recently.

I then continued to location #2, the Zaouia of Sidi Sahib which shelters the remains of a companion of the Prophet. It is a white, domed building just inside the city walls. I found it closed for entrance, but there’s another Zaouia, that of Sidi Abid Al Ghariani, deeper into the medina. Here I was allowed in, even without a ticket. After a reception room with benches covered by green, blue, and yellow tiles, you enter a courtyard with black-and-white arches. It opens up to several rooms, including the one where the tomb is. That one has a pretty wooden ceiling with multiple layers of ornamentation.

The Great Mosque I left for last, and here I could finally buy the 12 dinar entrance ticket that covers 6 sites in Kairouan. Its ancient origins (in an Arab-Muslim context, so from the 7th century onwards) and theological schools gave the city holy status. Kairouan’s current inhabitants don’t seem to be overly pious, nor was the mosque busy. The ambiance was more museum-like than religious, although it must be said that as a non-Muslim I was not allowed into the prayer halls (who knows what happens there).

What you can admire in the porticoes around the courtyard are ‘better’ remains of Carthage than at the current archaeological site itself. The Punic-Roman city was one of the sources for the rows of columns in various marbles and granite. Also, stones with inscriptions in Latin were reused, upside-down, to construct the walls.

In between these main sights, I enjoyed strolling through the quiet medina. Overall, I found the hassle factor higher than in the medinas of Tunis or Sousse, where it was barely existent. It consisted of harmless “Hey, where are you from?”-calls and invitations to visit carpet shops. Still, I found the medina in Kairouan the best of the 3. The streets here are wider than in the medinas of Tunis or Sousse. Many of the white buildings have light-blue colour accents, such as doors or towers. 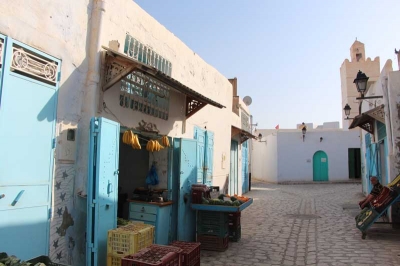 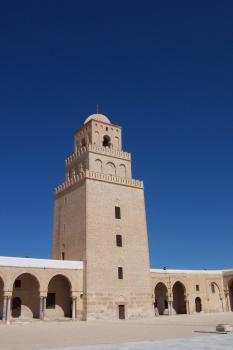 Islamic Art:Mosque of the Three Doors

Medina: Criterion (v): ..., the medina of Kairouan, whose skyline is punctuated by the minarets and the cupolas of its mosques and zawiyas, has preserved its network of winding streets and courtyard houses.
Spolia: Great Mosque of Sidi-Uqba: There are 414 marble, granite and porphyry columns in the mosque. Almost all were taken from the ruins of Carthage. (wiki)
Hypostyle: The Great Mosque "is one of the oldest places of worship in the Islamic world, as well as a model for all later mosques in the Maghreb. (It) is one of the most impressive and largest Islamic monuments in North Africa, its perimeter is almost equal to 405 metres (1,328 feet). This vast space contains a hypostyle prayer hall" See

Walled cities: "The walls are 3.8km long and 4 to 8 m high and have many gates like Bab Tunis, Bab Jalladine, and Bab el-Khukha."
Sundial: Inside the mosque
Cisterns: Aghlabid Cisters are inclused in Zone III of the inscription
Mausolea: Sidi Abid Masoleum
Notable minarets: The massive minaret of the Great Mosque of Kairouan in Tunisia is the oldest standing minaret. Its construction began during the first third of the 8th century and was completed in 836 CE (wiki)

Located in a Former Capital: Kairouan - capital of Aghlabid Kingdom
Umayyad Caliphate: Umayyad general Uqba ibn Nafi founded Kairouan
Berbers: In 745, Kharijite Berbers captured Kairouan, which was already at that time a developed city with luxuriant gardens and olive groves. (Wiki)
Ottoman Empire: "The Ottomans safeguarded Kairouan as the place in which Islam gained its first foothold in the Maghreb."