To the ancient Greeks Asklepios was the God of Medicine. A son of Apollo, he was given the healing gift after his mother died at his birth.

From the 4th century BC, Epidauros became widely known as a sanctuary to Asclepius. There were temples and hospitals here, and people from as far as Rome to seek help. Treatments included licks from snakes. Also, every four years the Festival of Asclepieia took place at Epidaurus. Dramas were staged and athletic competitions were held. Today's best-preserved building - the theatre - links to this. 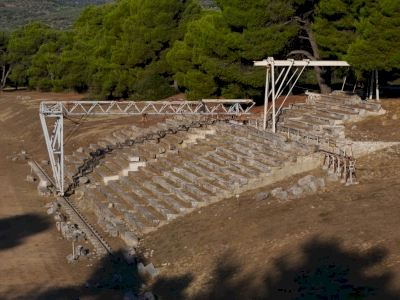 In Athens I purchased a ticket for the National Theater of Greece production of Lysistrata, a comedy by Aristophanes, at the Epidaurus Theater. The theater is the summer home of the National Theater of Greece based in Athens, and I just thought, what could be the better way to experience this most complete Greek theater in the world than watching an actual Greek play there?

From the bus parking lot in Epidaurus we walked several hundred meters to the theater, and I would assume that was my opportunity to see other components of this site.  But partly because it was already dark, I do not remember seeing anything of significance.

Seeing from the fact that several dozen other Greek or Roman theaters around the world have been struggling to keep themselves in good shape, the existence of the Epidaurus Theater in such an impeccable condition, with its famous acoustics, must be considered a blessing.

I'm sure everybody except me knew what the tour was going to be like. They knew what to expect.  I didn't.  I arrived back at my accommodation in Athens at 5 am!  I had a full schedule that day to check out another WHS! 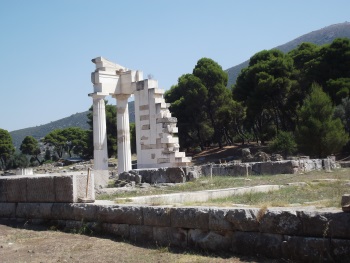 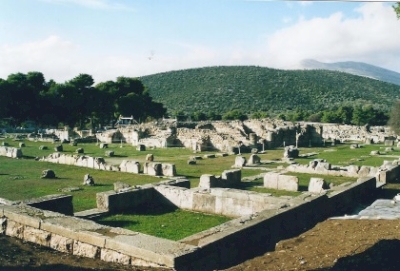 The site lies in a dark green pine forest, with air as healthy as you normally can only wish. There's a huge parking lot, but at the end of December, I was one of only a few guests. I had the amphitheater, which sits 14.000 people, to myself. It's like a football stadium, without the fences and the advertising. Unbelievably well preserved also.

Besides the theatre, you can visit a museum with local findings (mainly statues) and the excavations. Not much is in place of the hospitals, hostels, bathrooms, and what more was needed to serve the stream of visitors looking to improve their health.

The location of the site is its major drawing card. It's like a retreat, like the secluded places where they construct monasteries in Japan or South Korea.

Hellenistic Greece: "Asclepius, the most important healer god of antiquity, brought prosperity to the sanctuary, which in the 4th and 3rd centuries BC embarked on an ambitious building program for enlarging and reconstruction of monumental buildings. Fame and prosperity continued throughout the Hellenistic period." (wiki)