Hierapolis-Pamukkale was an ancient spa: the hot springs here have been used as a spa since the 2nd century BC.

Under Hellenistic and Roman rule, it became a healing centre where doctors used the hot thermal springs as a treatment for their patients. Significant ancient structures that remain:

And from the Christian period the St. Philip Martyrium.

The site also includes Pamukkale, located in the same town. Pamukkale consists of a landscape of white terraces with travertines. 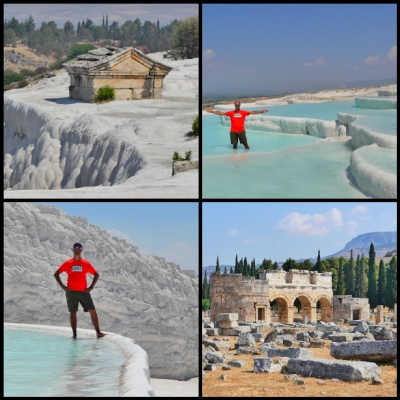 I visited this WHS in Spring 2021. It truly is an excellent example of a mixed site and as such I feel it deserves my 4 star rating. That said, before visiting I had marked Pamukkale as one of my remaining top WHS to visit, but after visiting I can say that I had neglected the Hierapolis component and may have been overenthusiastic on visiting Pamukkale.

I decided on staying 3 nights in the area (2 in Pamukkale and 1 in the nearby Akhan Caravanserai) as my base for visiting Laodikeia tWHS and Aphrodisias WHS too. This turned out to be a good decision as Denizli can be very busy with traffic and starting early helps to beat the crowds. Even though usually Pamukkale is open from 06:30, unfortunately the COVID restrictions for locals meant that the opening hours changed to 8am. Our early start rewarded us with empty pools for the first 30 minutes or so and a better overall experience especially in Pamukkale.

Be warned that Pamukkale alone can be an absolute circus targeted especially for tour groups. Think bus loads of tourists after late breakfast (even during COVID times!), swan paddle boats just beneath the travertine pools, selfie sticks, paragliding and hot air balloons, people posing everywhere, live parrots for "photo opportunities", and a never ending queue of tourists heading mostly to the Cleopatra's Pool hot springs with replica remains. Add to that the metal pieces added to divert the water flow to the pools, the ugly flood lights inside some of the pools, and the "management" or manually "operated" flow to the pools (different travertine pools are filled in depending on the days and times to control the natural calcification and the human impact as much as possible) + walking or bathing in the pools, didn't really match the standard I was expecting for what I had considered to be a top natural WHS. I would suggest going for the Pamukkale entrance from the tourist town centre uphill as it is less slippery uphill (you actually have to walk bare foot, so remember to bring a bag to keep your shoes in it while in the water).

Having visited early and proceeding to Hierapolis just in time when most of the buses and coaches arrived was a godsend so I still believe Pamukkale deserves inscription although it is seriously risking it. Having initially disregarded Hierapolis as just another cultural site in Turkey with Greek remains, what I saw in Hierapolis was really a positive surprise. Apart from the fact that it has an excellent location just above the travertine pools and hot springs, the ruins of a whole ancient Greek city are just waiting to be explored and most of the time simply ignored by the majority of visitors at least when we visited. The main street with the Frontinus Gate was the main highlight here and in a way is comparable to the Roman city of Pompeii. There's also an agora, a huge theatre, the Temple of Apollo, the tomb of Philip the Apostle, the Nymphaeum, a necropolis, baths, a really good museum, etc. We really enjoyed walking through the ancient city literally from where the water flowed and was distributed. This really was a top notch WHS even alone so overall make a great mixed site to visit. 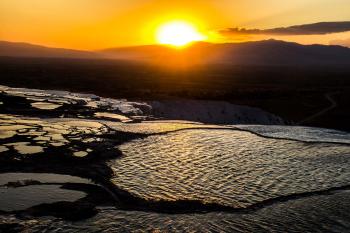 These days the ruins of Hierapolis are still there and are worth visiting. The hotels, on the other hand, have been completely demolished after it was decided they were causing too much damage to the site and the whole area was heritage-protected.

Whereas once you could swim in the travertines, now security guards keep a watchful eye on anyone trying to get too close. Other than a special swimming pool that has been constructed away from the cliffs, Pamukkale is generally to be seen but not touched these days.

In many ways, that’s to be applauded. The site is a truly remarkable natural phenomenon and it would be a pity if human interference damaged it permanently for future generations. There were certainly no complaints from anyone about taking their shoes off. 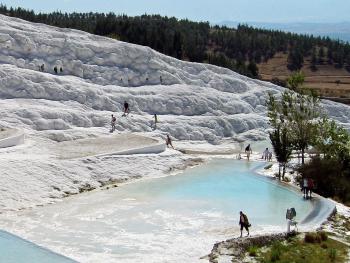 A friend living in Turkey recommended I add Pamukkale to my itinerary when I visited Turkey in 2007, and it was a great recommendation. The calcium terraces of Pamukkale are brilliantly white as you approach them from the village below, and I was in awe at the extent of the travertines. Visitors are required to remove shoes when wading up through the series of pools fed from the hot springs at the top of the hill. The water wasn't particularly hot--it was lukewarm at best--but the views from the terraces were spectacular. At the top of the hill was the Greco-Roman spa town of Hierapolis, because who wouldn't want to build an ancient resort in such a beautiful location! The ruins were typical of other Greco-Roman cities, and included a theater, an arcade, temples, and a necropolis. There was also a hot springs pool at the top of the hill, but unfortunately I didn't have enough Turkish lira available at the time to visit the pool.

Logistics: Train or bus to the city of Denizli; minibus from Denizli to the village of Pamukkale.

Too many tourists, too much money. 20TL to get into the site, 20TL to swim in the thermal pool. Hierapolis not the best ancient city - try Priene, even Ephesus (though that has even more tourists, make sure you get there late afternoon)

Even 30 years ago the site of Pammukale had been ruined by too much tourism, destructive tourists and hotels, and a lack of mineral-laden water from which these formations were formed. On the other hand the site of Hieropolis is worth a visit. When I was there they were just begining to excavate the theater and there was an amazing amount of beautifully carved stone still in place. But the best reason to visit this city is the large necropolis. It has a wide variety of tomb styles not seen elsewhere and you can enter some of them and see where families had meals to celebrate their ancestors. Also there is a photogenic triple arch gate to the city.

The whiteness of the area was very hard on the eyes. Worthwhile to see, but I'm not too sure it's worth more than a pass thru.

The springs at the top were well worth the visit - My girfriend said it was like swimming in warm Perrier!

Hierapolis and Pammukale are good places to visit in Turkey. Unfortunately they have begun to suffer from a bit of over-development. This is especially true of the travertine pools. They are now mostly dry and you can no longer bathe in them. Some of them are even artificial now! The ruined city, on the other hand, is pleasant. There are usually not big crowds and even if there are, you can escape them easily enough. The thermal pool at the top of the travertines is pricey (18 lira a pop), but worth it if it's not too crowded.

Beautiful photos of thepools at Pamukkale

Hellenistic Greece: Hellenistic spa town of Hierapolis, founded by the Attalid kings of Pergamom at the end of the 2nd century B.C (OUV)
Byzantine Empire and Civilization: Hierapolis: "During the Byzantine period, the city continued to flourish and also remained an important centre for Christianity." & "The martyrium had a special design, probably executed by an architect of a Byzantine emperor. "(wiki)

Mentioned in the Bible: Colossians 4:13 - "I vouch for him that he is working hard for you and for those at Laodicea and Hierapolis."
Nymphaeum

Built in the 4th century: For its Christian monuments: "The Christian monuments of Hierapolis, erected between the 4th and the 6th centuries, constitutes an outstanding example of an Early Christian architectural group" (AB ev, Criterion IV)
Built in the 2nd century BC: For its Greco-Roman spa qualities: "they founded a thermal station on the site in the late 2nd century" (AB ev), and Romans from 129 B.C.
Late Pleistocene: Pammukale: age estimations show that travertine deposition started during the late Pleistocene. (Encyclopedia of Caves and Karst Science)

Derived from more than one TWHS: Originally two separate nominations (Hierapolis and Pamukkale).