I was in Sunderban, West Bengal quite a number of times to conduct a study of mental health status and needs of the survivors after two years of disaster due to Aila ( name given by Maldwip for separate identity), that occurred on 25th May, 2009 in the Southern parts of West Bengal and Bangladesh because of formation of devastating cyclone in the Bay of Bengal . While conducting my study at 8 No. Khaikhali and Deulbari, in the Kultali Block; P.O.- Ashram , I met some of the affected people like Nirupada Mondal (Fisherman), Nirmal Naskar (Autorickshaw Driver) , Rabin Naskar (Boatman), Ramini Das( Runs rented shop in Ram Krishna Mission, Khaikhali), Bishnu Pada Sardar (Farmer).... they narrated the horrible situation in Aila cyclone-affected villages of Khaikhali and Deulbari. It was not just an opportunity for me to extend my understanding of extent of disaster but also to listen to the needs of people struggling for survival. According to Nirupada Mondal immediately after disaster the survivors in the villages have been facing scarcity of food, drinking water because of the fact that sea-water ruining their freshwater ponds, and that was responsible for several survivors suffering from diarrhoea after having no choice but to drink the saline water, and loosing the means of earning livelihood as they have traditionally been dependant on agriculture that has been ruined by the saline water from Bay of Bengal that had entered their farms. 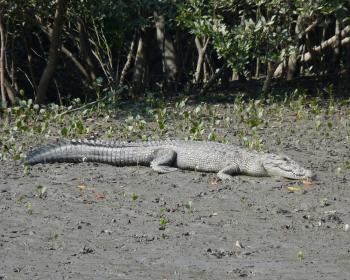 India to spend Rs 200 crore for tiger conservation for the development of Sundarbans biosphere (2010.01.14)

Sundarbans, the world's largest mangrove, faces a threat from global warming and a mere 45 cm rise in the sea level will destroy 75 per cent of the forest spread over 10,000 sq km in West Bengal and Bangladesh, a UN study said. (2007.05.01)