The Ngorongoro Conservation Area is a nature reserve which main feature is the Ngorongoro Crater. The crater floor is covered with open grassy plains that hold both fresh and brackish water lakes.

It is the world's largest unbroken, unflooded volcanic caldera. The Crater formed when a giant volcano exploded and collapsed on itself some two to three million years ago.

Ngorongoro is thought of as "a natural enclosure" for a very wide variety of wildlife. It has the densest known population of lion in the world. The most commonly seen animals are gazelles, zebra and wildebeest.

At its inscription special notice was taken of the balance between conservation and the needs of the Maasai pastoralists who still take their livestock into the reserve. 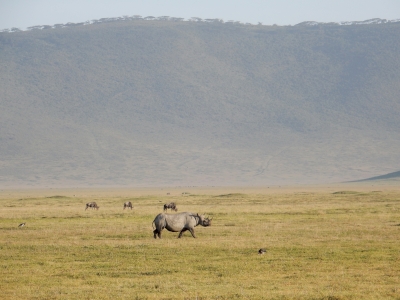 The giraffes stared down at us. We stared up at them. Animals that had seemed gentle and almost comic from a vehicle were much more imposing when viewed from on foot. One became agitated by our presence so we retreated back to the cover of the trees lining the gorge. “Take care”, urged Taletien, suggesting we grasp the tough sisal leaves – oldupai in Maasai – as support ropes while we descended the riverbank. But as I jumped the last foot down to the fine black sand I caught the edge of my palm on a leaf tip. Blood welled up. Taletien inspected the prick: “Let me show you some Maasai medicine”. With his knife he chopped down an oldupai leaf. He twisted it so that its greenish soapy-smelling liquid dripped onto the cut. This, he explained, was a local (in both senses of the word) anaesthetic. But he still recommended a wash and a plaster once we left the gorge.

The gorge in question was, of course, Olduvai (or Oldupai) Gorge, one of the most famous paleoarchaeological sites in the world. Unlike Louis and Mary Leakey we were not searching for the remains of Pleistocene hominids; we were merely taking a breather between the two big finales of our safari, the Serengeti and Ngorongoro Crater. But we were already in the World Heritage Site: the Ngorongoro Conservation Area extends far beyond the crater itself. In the north-west it abuts the Serengeti National Park itself, then stretches south to Lake Eyasi. The Olduvai Gorge runs east-west between Lake Ndutu and the Crater. And further craters – Olmot and Embagai – can be found north of Ngorongoro. The Conservation Area is pretty big. We had planned to explore more of it; hikes up Mount Makarot or down into Embagai Crater had been discussed and discarded. But we did see three separate elements:

I would argue that one other prime difference is that the Conservation Area is still inhabited. Residents have not been relocated to make way for a National Park. It’s a difficult balancing act. Returning from the Serengeti it was a shock to see such evidence of human activity: a gleaming mass of animal life revealed itself to be a herd of cattle, women toted water along the road, thorny-walled bomas were dotted hither and yon across the landscape. Conflict between man and animal is, perhaps, inevitable but for now coexistence seems to be holding. 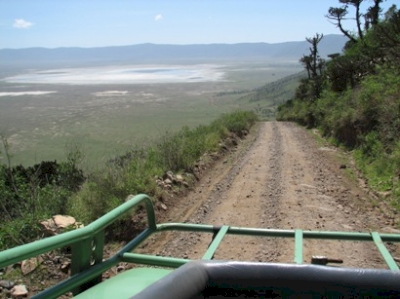 Ngoro Ngoro is the sound cowbells make. At least this is one of the possible origins of the name Ngorongoro. These bells you hear right away when descending the 600 meters from the crater rim. Some Maasai herdsmen are leading their herds down for water. These herds consist of dozens if not hundreds of cows.

On the crater floor, we encounter only birds at first, such as cranes and the sacred ibis. The major salt lake also holds numerous flamingos. Unfortunately, you cannot come close, but a pink glow can be seen. Not far away is a mud bath full of hippos. These are more lively than the ones we saw in the Serengeti. They perform a full circle of 360 degrees with their fat bodies, so they get completely covered by the mud.

On a plain, our driver suddenly spots a rhinoceros. There are only 22 of them in the crater, so it's a rare appearance. He is moving among a group of wildebeest and buffaloes. With this (black) rhino, we have completed seeing the "Big Five" of predators in two days (lion, elephant, buffalo, leopard, rhinoceros).

Another highlight comes from a family of hyena just along the road. We first see a male and a pregnant female hurrying in front of our jeep. A little further it shows that they were on their way to their little ones, which are half-hidden in a pit. There are three kids in all. The whole family then huddles together nicely in the pit which is full of mud. A few meters away a large warthog is buried in the same way.

After lunch, we drive through a part of the 260 square kilometers large crater which seems to hold fewer animals. On the crater wall, there are huge herds of wildebeest, just like ants when seen from a distance. Also, there are zebras, as they are everywhere.

In a corner of the crater floor is a spot with higher grass and trees. Here we see lions again. Six of them stretched out in the grass. And then four females with two children. The latter are close to the road and look at the visitors in the jeeps. Their mothers, however, all look the other way: they have their eyes on two zebras. One lioness slowly creeps through the high grass. Two others remain on the lookout. The fourth has started a large move to the zebras from the other side to surprise them. We continue to look for a long time, but it doesn't come to an attack. Lions need to be very close to their prey to be successful, they then jump on top of it by surprise.

I recently visited Tanzania on safari for my honeymoon. We visited in early July and spent almost two weeks there. On our travels we visited the Ngorongoro Conservation Area. It was amazing. Although we were there during the dry season and everything wasn't as lush as in pictures I had seen, it was beautiful. The weather was cool to cold along the rim, but inside the crater it was perfect weather for safari. Because of it being the dry season the tsetse flies were minimal and mosquitos were not a problem. We saw lions, hyenas, black-backed and common jackals, elephants, DeFassa's waterbuck, vervet monkeys, baboons, plenty of hippos, wildebeast, zebra, Thomson and Grant gazelle, flamingo, three species of eagles, various water birds, buffalo, and four black rhino. Amazing!! A lifetime experience for naturalists. A nice note is that the crater closes at 6 pm daily and this is strictly enforced. Park rangers watch your every move from above. The needs of the animals are definitely the priority here.

Returned to Canada from a great tour. Enjoyed our time at the crater very much. Had excellent guides/drivers with Leopard Tours, stayed at Serena Lodges and enjoyed them all very much. The Serenena Lodge at the Crater being one of my favourite. Food excellent, staff wonderful. Room very comfortable, enjoyed the cooler evening for sleeping. Saw an amazing rainbow late afternoon over the crater out my door - great photo. Saw lions, rhino, huge elephant lots of other animals also. Would have liked to see more rhino, but at least saw the one. Great day, would like to explore area surrounding crater more - next time! Enjoyed seeing the Maasai with their herds, missed them when we got to the Serengeti. Was not overly impressed with Olduvi Gorge, but it was OK.

Extension to add cultural criteria: "because of the extraordinary record of human evolution at the site" (including FTWHS Laetoli Site)

In a move to save the Ngorongoro conservation area from being struck off Unesco`s list of world heritage sites, the government has banned farming inside the area (2009.05.05)

Rhino habitat: Black rhino
Big Five: The 1992 IUCN list of mammals in the AB evaluation includes all 5 (of which buffalo, elephant and leopard were present "on the crater rim" 9but (but still within the inscribed area) whilst Rhino and Lion were "in the crater". As of 2009 it is thought that all are still present, with the Rhino the most threatened.
Critically endangered fauna species: Black Rhinoceros - General: "Population size collapsed during the last century, from an estimated 65,000 animals in 1970 to a mere 2,300 in the 1990s. Rhino numbers are now increasing, but recovery is slow"; in Nogorongoro: "between 11-14 in 1995"
Elephants: African elephant
Ratites: common ostrich
Strepsirrhini: brown greater galago
Fossils: Although the interpretation of many of the assemblages of Olduvai Gorge is still debatable, their extent and density are remarkable. Several of the type fossils in the hominin lineage come from this site. (OUV, crit iv)
Somalia-Masai regional centre of endemism

Early Hominid Remains: Based on fossil evidence found at the Olduvai Gorge, it is known that various hominid species have occupied the area for 3 million years.
Archaeological 'Type Sites': Olduvai Gorge - Oldowan Culture ("Even though Olduvai Gorge is the type site, Oldowan tools from here are not the oldest known examples" Wiki)

Traditional Hunting: Ritual lion hunting (Ala-mayo) was banned in the 1970s but Masai are allowed to kill lions in retaliation against wildlife attacks
Indigenous groups expelled: Maasai. “Perhaps the most critical land loss was experienced by the pastoralists living on the floor of the Ngorongoro Crater. As a consequence of the villagization programme of the mid 1970s and the hardening conservation rule they were evicted from the Ngorongoro Crater in the late 1970s. Grazing and watering of livestock in the Crater, covering an area of some 250 square km, were prohibited -
Language isolate: Hadza - The Hadza traditionally inhabited the Ngorongoro Crater. They now live in villages around it.
Natural sites with indigenous human population: The Masai live in the Ngorongoro Conservation Area and still maintain their pastoralist lifestyle.

Leakey Family: Olduvai in the Ngorongoro conservation area was also famously "discovered" by Mary and Richard.
Female Archaeologists : Mary Leakey (nee Nicol, 1913-1996) "For much of her career she worked with her husband, Louis Leakey, in the Olduvai Gorge, .... uncovering the tools and fossils of ancient hominenes. Leakey developed a system for classifying the stone tools found at Olduvai" (Wiki)

Early Pleistocene: Olduvai Gorge gave its name to "Oldowan". This "is the archaeological term used to refer to the stone tool industry that was used by Hominines during the Lower Paleolithic period. The Oldowan is significant for being the earliest stone tool industry in prehistory, being used from 2.6 million years ago up until 1.7 million years ago" (Wiki) Later remains have also been found at Olduvai.

History of the World in 100 objects: Prog 2 "Olduvai Stone Chopping Tool" (link) Prog 3 "Olduvai Handaxe" (link)
Fatal Accidents or 'disasters': 11 people killed in a plane crash (Nov 2017)
In The Simpsons: “Simpson Safari” (2001)
Blake and Mortimer: The Gondwana Shrine: "In Tanganyika, Professor Heidegang discovers in the lake of the Ngorongoro crater a secret entrance leading to a sort of sanctuary."

Archaeological Site Reburial: Laetoli Tracks. "The footprints have been Reburied" (2010 AB Eval). In fact the original deliberate reburial of the Tracks by Mary Leakey wasn't a success and has led to improvements in burial technique and subsequent monitoring for such sites.

Inscribed on all 4 Natural criteria
Former In Danger List sites: 1984-1989
First inscriptions: Tanzania 1979 (as a natural site)
Mixed sites which became so after original inscription: Natural extended to Cultural
Extended: 2010: Extension to add cultural criteria: because of the extraordinary record of human evolution at the site (including FTWHS Laetoli Site)